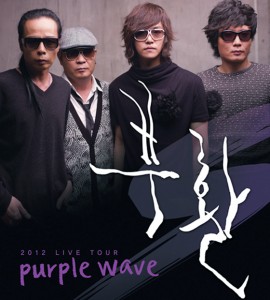 Almost three years since their last album, Boohwal returned with Purple Wave at the beginning of the month, marking the release of their 13th album on their discography. For those who don’t know them, we’re talking about one of the most influential K-rock bands that debuted way back in 1985 and despite rough times and countless line-up changes, managed to stay relevant in the music industry. Their latest album consists of 10 tracks which stay loyal to the band’s acknowledged musical style. Thank god no other member was replaced or left since the last album, so the members are the same as we know them: mastermind guitar player and songwriter Kim Tae-won, incredibly skilled singer Chung Dong Ha, the veteran bass player Seo Jae-hyuck and solid drummer Chae Je-min.

The album begins with a rock ballad, “Return to Innocence.” The succession of quick, relentless piano segments introduces an overwhelming feeling of anxiety. The initial sweet and delicate melodic line meets Jung Dong Ha’s almost-whispering voice. As the two of them occupy the frontline, the guitar and drums insidiously insert themselves in the background, only to claim the main role during the chorus. The diaphanous tone encounters the typical rock sound and the singer’s voice hits higher notes, anticipating a short Tae-won solo.

The whole song reflects the message of the lyrics. The alternating sweet – rich vocals and soft – hard rock sounds emulate on a musical level the impossibility to undo the pain and return to an earlier stage. The despair that builds up until the protagonist decides to go back and try to win over his past lover synchronizes with the explosion of Dong Ha’s voice, marking the climax of the song. As the man makes up his mind and decides to take a leap of faith, the rhythm calms down and ends with his dramatic:

While “Return to Innocence” dips its tones into impatience, regret and sorrow, “Resurrection” (“Boohwal”) is a journey in the depth of an unceasing angst. Rearranged after Rachmaninoff’s “Piano Concerto no.2,” the band brings in a rougher edge for the tune. The sequential, repetitive drum note locks the listener into a claustrophobic space. A sudden interruption occurs; an imperceptible melody gradually ascends in volume, welcoming Dong Ha’s vocals that float on the surface. The short, modern lyrics are soon over, letting the instrumental take over again, this time integrating both the original toughness and the mellow harmony used until now.

The breaks, the short moments of silence, the guitar riffs and the drums’ power create a complete experience: the depressing thought of getting through another day, love loss, nostalgia, bordering with a sense of void while still keeping hope as a spicy flavor. This should honestly have been the title track. No other song matches the complexity of “Boohwal” and hardly could I name anything off the album that is as engaging as this one.

The plot thickens and things get more personal. The melody of “Don Quixote” expresses a balance between a natural flaw and a prevailing state of pressure, with the tension being released during the chorus. The pop-rock track keeps anxiety and undefined waiting as the center of the song only that this time they assort it with a useless struggle. The city is the setting for the expedition into finding what they need. They feed on illusions as Quixote did to find his meaning.

The reference to an earlier song, suggested in the awkward “I can dreams come true” could show that Purple Wave has an autobiographical component, a rumor that circulated before its release. As for the progression, the already established verses – pre-chorus – chorus – guitar solo – pre-chorus – chorus is here to stay. More energetic and tempestuous, the spunk this track’s got announces that this album is ready to skyrocket.

And “Head Up” is proof of that, bringing some hard-rock and good old heavy-metal to the yard. Aggressive and passionate, the track undertakes the listener on Boohwal’s battlefield. The mischievous guitar riffs and the addictive drum beats ally with Dong Ha’s enticing singing, setting the framework for their rebellious attitude. “Head Up” revolts against a grey world, where the impassivity and coldness opened Pandora`s box. The obsessive “Give it away! Head Up! Open your eyes!” fosters the revolutionary statement.

When in need for a break, “Pluto” comes to the rescue. The acoustic guitar prefaces a smooth fairytale-like ballad based on the cosmic imagery. Distant and cold, hidden in the dark, Pluto is a symbol of fecund isolation, fascinating for its mysteriousness. Despite its whimsical wording, its sadness soon overcomes the emotional playground. The loneliness emerges with the narcotic effect of the singer’s breakable vocals. Unlike the typical Boohwal ballad, this one doesn’t have energy or a conspicuous climax. Keeping a low profile, the whispering and rusty voice adds to the lyrical quality of the track, together with a gentle instrumental.

“1982” maintains the unclouded atmosphere: its pop-rock tones invite us to breathe a fresh summer air. The lyrics adopt a narrative style, expressing the nostalgia for a youth spent enjoying the sea breeze while living an unforgettable love story. Charged with beautiful memories, painful longing and unfortunate timing, the words describe the leader’s first love. However, I raised an eyebrow when I heard the singer saying 1972. I understand somebody older wrote the lyrics, but dude, you were -8 years old back then.

Speaking of the devil, I must confess now that I’m in a love-hate relationship with Dong Ha. His voice is perfect for the genre, but there is something inflexible, I can’t tell exactly what, that disturbs the flow of a song and made me unfriendly towards Emotions. Some of the tracks on Purple Wave seemed difficult to sing, so I feared that in spite of his stable vocals, he won’t do well on live performances. And boy, was I wrong:

This guy not only has awesome vocals — as I mentioned –, but he has mad charisma. And if you’re wondering about the last song of the performance, that is actually the title track, “Froid.” I don’t know why they wrote the credits in French and I might not be an expert, but I am positive that the French also call it “video” and not “film de musique.” Details.

Directed by John H. Lee, the MV was beautifully shot. It begins with an empty wooden chair in the middle of the road, while the sky announces an imminent storm. Tae-won heads to a burnt-down house to meet his band. As the piano notes gracefully announce the beginning of the song, Dong Ha’s soft voice engages in telling the story of an unrequited love, whose main protagonists are Tae-won and a girl who appears to happily leave him. Tae-won has its own place where he pens his song, made of two walls, close to the field where the girl with a suitcase is innocently playing — the half being an allusion to one-sided feelings. As the video progresses, the girl goes farther away and the video ends with the lovers parting ways.

While the setting for the girl emanates a summery feeling, full of freshness and life, Tae-won’s room is crumbled, dark and isolated. The pervasive lightning accentuates the melancholy and the contrast between the pure love and the impossibility to share it. The suitcase that the girl keeps in her hand while compassionately smiling conveys the painful nature of this relationship. Both the ballad and the video are challenging and addictive, combining a glimpse of happiness with overwhelming regret. 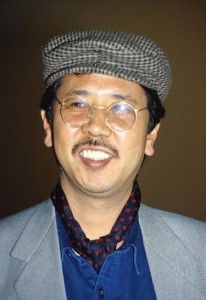 There are three other tracks that bring the album to an end. “Beard of God” is an instrumental that does justice to both Jae-hyuck and Je-min, with a funky and upbeat sound. “In Addition to the Name of Love” is a retake on a 2011 collaboration of Tae-won with the Qualifications of Men’s Youth Choir and triumphantly concludes the album.

The next-to-last piece, “Color of Merging,” is by far more intriguing. It was composed by Lee Nam-yee, a musician who died of lung cancer in 2010. One of her daughters stepped in and was in charge for the vocals. A simple piano line leads the farewell. The unusual peace and serenity that uncontrollably shatter at times makes it unbearable to listen to; unsettling and paralyzingly beautiful, the tribute is one of the best tracks of the album.

Overall, I barely can complain about anything on Purple Wave. Boohwal has talented members and the composition, production and songwriting were always carefully done. In terms of evolution, this is the typical release from the guys. The band chose to follow instead their own musical trajectory, which can be good or bad, depending on the judge. Tae-won made his intentions clear:

Our fans will be able to meet Boohwal the way that it was back when we were in our twenties.

Kudos to them. As far as I’m concerned, to say I appreciated their consistency and I enjoyed the album to bits would be an understatement; the band can do no wrong for me, so I granted them a final rating of 4.7/5 — because I’m not completely delusional, after all.

If you haven’t given the album a chance yet, I recommend you did it as soon as possible. You’re missing out on an amazing artwork. And if you have, what are your favorites? How would you change the rating?