Life's a Party in SNSD's "Paparazzi"

After releasing the music video for their song “Time Machine” months prior, SM’s number one girl group, SNSD, has returned again with a new single, “Paparazzi.” With this single comes two music videos and supposedly more to follow. I was looking forward to this release with great anticipation, but I was left with a variety of mixed feelings. The song is catchy enough but has yet to grow on me, and I was surprised by the amount of lines Yoona got. As for the music videos…

Their story begins with the girls strutting down a hallway, looking like jaded movie stars, and into a swarm of paparazzi. The scene changes to a large theater filled with people, and a man walks onstage and introduces Girls’ Generation. While it’s logical to expect the song to start here, we hear Gene Kelly singing “Singing in the Rain” as the girls twirl onstage in trench coats instead.  What’s the purpose of “Singing in the Rain?” Or them twirling onstage? After coming together, they wear shocked expressions as the screen flashes, quite obviously signifying flashing cameras. And then the song officially begins. As far as intros go, this one left me confused. I gather that SNSD are starlets but I don’t see how the stage or the show tune has anything to do with paparazzi or the song in general.

After the camera clicks, SNSD tosses off their coats and the song officially begins. Let’s take a moment to appreciate their dreadful clothing. Most of the girls look like birds of paradise with large amounts of plumage attached to their burlesque-style clothing. 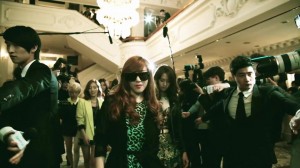 Sooyoung got the worst of the outfits, wearing a red velvet jumpsuit with feathered shoulders, but Hyoyeon, Yuri, and Sunny wear semi-normal clothing. The cinematography is good, however, and I love the vibrant red color of the clothing. But I don’t approve of the bright pink gloves — they should be burned immediately. Their feminized tuxedo outfits would look fine without them.I felt as if there were too many scene changes, making it harder for me to concentrate on the dancing, and sometimes the camera angles only served to capture the most awkward parts of the choreography, like at 3:23 when you can see Sunny’s head bob up and down during Jessica’s solo.

For the most part, the girls did a great job performing in this MV. They looked the part of aloof socialites at the beginning and had a good amount of energy when dancing. However, there were times when the girls looked noticeably out-of-sync or awkward when dancing, but this could be the choreography’s fault more than SNSD’s. During one part of the MV, Tiffany, in direct eyesight, had her gaze directed downwards as she danced. Because of the shoddy dancing, I can’t give SNSD perfect marks for performance. 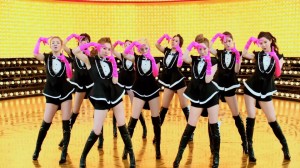 The song and the music videos are the sort of fun, happy, feel-good affair you often see and have no intellectual or emotional statements to be made. Like SNSD says, “Life is a party” and you are the star and with that they give you a catchy, albeit strange, dance with a signature move of moving a box with your fingers.

The music video ends the same way it began, but backwards: the girls twirl offstage to Gene Kelly’s voice, which is a really weird way to exit. It was also an anticlimactic way of ending the music video. The song ends with a punch, the girls featured all over a newspaper’s front page, but then everything suddenly slows down so the girls can awkwardly leave the stage. I’m not a director but maybe if the girls had a standing ovation and bowed to their audience and ended the music video on an enthusiastic note, the ending might’ve been a little more interesting.

There’s a lot to be said about “Paparazzi’s” choreography — it’s the most disjointed choreography I’ve ever seen SNSD perform. This choreography tried to make use of individualized dances for each of the girls but the end product looked messy.  The girls swoop and sway at different intervals and maybe it didn’t work because of their dancing abilities (or lack thereof).  In sum, the  choreography was very awkward and even familiar. I swear that I’ve seen similar moments in “Bad Girl,” “Mr. Taxi,” “The Boys,” and “Tell Me Your Wish.” Sometimes there would be distracting background moments as the girls danced positions and other times half the girls would be bent over in awkward positions as someone behind them waved their arms. And then there were pieces that just didn’t seem to fit, not with the choreography or the song, like Tiffany and Yuri’s high-five and the movement beginning at 2:21, when Jessica begins her solo, when the girls stretch out their arms like goalies and hop out of place.

“Paparazzi” wasn’t all bad — a little boring for a single but suitable nonetheless. It was prettily shot and catchy and although the girls’ outfits and dancing could’ve used some work, I’m giving these MVs and the single a 3.5/5.