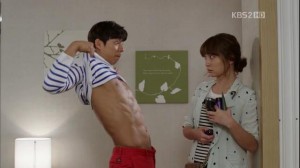 As we enter the hot days of summer, what has K-pop got to offer us to cool our K-pop cravings? Davichi released “Because It’s You” and Beast the song “Hateful Person” for the Kdrama Big‘s OST, Dal Shabet made a comeback with “Mr. Bang Bang” (if I watch the MV another time I’ll ‘Bang Bang’ myself), Block B are “Burn Out” for the Ghost OST, Juniel released her 1st mini album My First June and the MV for the title track “Illa Illa,” Big Bang and Hyundai Card announced their Re-Monster contest, Yong-hwa‘s getting pumped up in the gym while on break, 2NE1 releases “Be Mine” for their project with INTEL, T.O.P. wants you to “Move 2 Fubu,” Big Mama’s Lee Young-hyun released her first solo album Plus and the MV for its title track “Time,” Wheesung and Soul Star’s Lee Seung-woo released the MV for their duet “Should I Catch a Cold” (isn’t Wheesung serving in the military right now?), and it was a whirlwind week for SS501 fans as the qunintet reunited as five (kind-of) at Kim Kyu-jong‘s fan meet, his last appearance before enlisting, and they also celebrated SS501’s 7th anniversary–if you understand that whole apart, but together thing they got going on.

We also had the debut of the Hong Sisters‘ latest K-drama Big, which I liked–but don’t LOVE yet and the ending of Queen In-hyun’s Man. In K-variety, actor Joo Sang-wook visited the set of Invincible Youth 2 where he got some “Lovey Dovey” lessons from the visiting Hyomin and “Alone” lessons from Bora, while the Running Men were introduced to Zombie High.  The following are the 5 Things that happened in in K-pop last week that I thought were a little bit better than the rest. There are most definitely spoilers ahead, so beware if you’re behind in your K-pop.

Most talk about the last episode of Strong Heart was of the mistreatment of Sung-gyu by the rest of the members of Infinite, but my fave part of the episode was right at the beginning when model\actor\G-Dragon BFF, Lee Soo-hyuk, was called up to show off his catwalk skills across the stage.  Eunhyuk gets called up for the challenge afterwards–loved his little power up move when walking by the taller Soo-hyuk and then his continuation right off the stage in embarrassment.  Love Soo-hyuk’s voice, hate his new hairdo.

In the last episode of Dancing with the Stars Korea 2, loved the performance by actress Choi Yeo-jin and partner Park Ji-hoo, a tango to “Back in Time” which was the main love theme in the K-drama The Moon that Embraces the Sun sung by Lyn.  The song doesn’t immediately ring ‘tango’ to me, but the band tweaked the music a little and Choi Yeo-jin and her partner did the rest.  Love the lines and extensions in the dance that Yeo-jin was able to achieve with her great posture and lithe movements.

3. Boys will be Boys

Even if they’re forty years old.  The bromance is perhaps that best part of A Gentleman’s Dignity and nothing is better than when the four friends are together on screen.  Check out this clip where the men discuss such important matters as “who is the best member od SNSD?”  What’s more hilarious than Yoon‘s reaction to meeting SNSD’s Sooyoung in person (especially after he was previously criticizing their conversation over such a mundane matter as the best member of SNSD), is his friends’ reaction to his fan boying– nothing like seeing one’s weaknesses up close and personal.

K-rock legends Boohwal, released their 13th album Purple Wave last week.  It’s been three years since their last album release and the band comes back with their title track, “Froid” which is a sad rock ballad.  The MV for the song was directed by John H. Lee, who some of you may remember was the director of the film 71: Into the Fire.  It’s beautifully shot and the MV’s desolate scenery mimics that of a heart broken by a one sided love.

I’m the type to spoiler myself, mostly because I’m impatient and can’t wait for subs.  With this drama, I forced myself to wait until subs came out on the weekend to watch (but once in a while I took a peek at the recaps).  It was disappointing to read comments that said the ending was a cop-out after having such a great script all K-drama long.  I agree with some fans that the drama could have ended at episode 14 and I would have been happy as a clam, but I found episodes 15 and 16 to be well thought out and a worthy end to a great K-drama.  The emotions traversed in episode 15 were so stirring from such boundless joy to the depths of rage and sorrow–it was an awesome, yet heartbreaking watch.

And though some felt that the use of the phone was a lame way for Boong-do to come back, I beg to differ.  It was never the phone that let Boong-do come back, if it was he could have come back anytime since he still had the phone and his memories.  Rather, it was the power of Hee-jin‘s love fighting through the memory loss, caused by the burning of the talisman, that was the magic that “called” Boong-do back.  I love how they tied in the documentary with the secret documents that Boong-do wrote in the past to Hee-jin who played Queen In-hyun in the drama (if only the documentarists knew how right, yet how wrong they were), it was fate giving them their second chance if only their love was strong enough.  And if in case you missed it–on the screen behind them kissing at the end was Soo-kung‘s third interrogation of Boong-do for trying to be Hee-jin’s boyfriend, “What school did you attend?”  Classic, the writers for Queen In-hyun’s Man deserve an award.  Here’s my nomination for “Best Remake of a Disney Classic Moment in a K-drama.”

Ah, no wonder Ji Hyun-woo couldn’t help himself and confessed his love for Yoo In-na at the finale press conference.

Those are the 5 Things I LOVED in K-pop last week, were they yours? 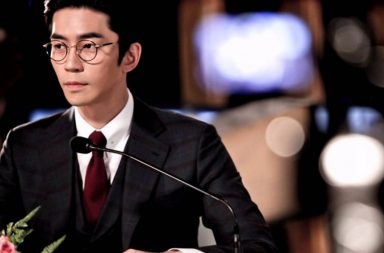 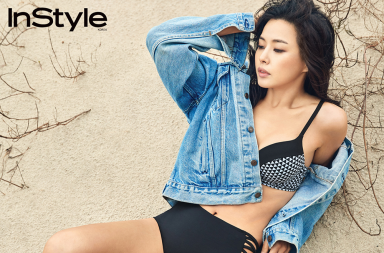 Series Overview: Love, Sex and Magic in “The Lover”