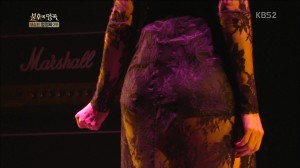 There is no doubt that Immortal Songs 2 has really brought back the legends to life. The program is even more significant to international fans like us in the sense that we get to know more about other breath-taking Korean artists beyond the realm of idols. Today on Seoulbeats, we present to you what we think are the best performances by non-idol singers in the program. The only criteria for judging is that the performer must be able to make the audience go “woah” after watching them on the stage.

Listening to JK Kim Dong Wook on Immortal Songs 2 is like discovering an old piece of fine china in your grandma’s house. It has always been there, withstanding dust and time, waiting patiently for someone to appear and appreciate its true value. “A Million Roses” is a famous Latvian song about Georgian painter Niko Pirosmani, who allegedly spent his entire fortune buying roses for the actress he loved. The song has been translated into various languages and performed by numerous artists. In JK Kim Dong Wook’s adaptation, he did not need a spectacular arrangement nor impressive screams of high notes to make the audience feel the song. Declaring his emotions candidly while keeping a perfect control of his voice and facial expressions, this gentleman is one true seasoned performer.

Sweet Sorrow is always a dorky group of four playful kids in the waiting room of Immortal Songs 2. However, the moment they step on the stage, their mastery of harmonizing blows our mind. Despite graduating from Yonsei University, which is one of the most prestigious schools in South Korea, Sweet Sorrow did not immediately walk on success and fame. The group gradually gained their position in Korean showbiz through various music shows, competitions and drama OSTs. Their group name is derived from the line in Shakespeare’s “Romeo and Juliet”: Parting is such sweet sorrow.

“It’s A Lie” was composed and originally sung by the legendary rocker Shin Jung-hyun in 1971. Sweet Sorrow has re-arranged the song using the Latin sounds of violin and piano, thus rendering a more theatrical and sensual color to the performance.

Despite winning multiple times on Immortal Songs 2, Ivy leaves the strongest impression in the audience with her cover of Uhm Jong-hwa‘s “Invitation”. This female singer has the voice and the body, she can dance and she possesses a great stage presence. And “Invitation” is really one stage where the sexy queen demonstrates all these. Indeed, Ivy can convey desire with even just a flick of her fingers. Male fans, you have been warned.
[youtube http://www.youtube.com/watch?v=7E_ICuP9D0k]

4. ALi — “Thorn Birds”
There is a reason why Ali is dearly called “the major singer” of Immortal Songs 2. Not only because she has set the incredible record score of 447, but also because she has demonstrated an infinite versatility throughout her appearances on the show. She constantly jumps across genres and smartly brings to the stage unexpected arrangements and co-stars — Immortal Songs 2 is never boring with her.

I first listened to “Thorn Birds” two years ago, when I had absolutely no idea who Ali was or what the song was about. Nonetheless, the performance gave me goosebumps. Combining rock guitars and the traditional way of singing Pansori with a drummer (고수), through her compelling voice, Ali besieges your attention.

Let’s just say even someone unfamiliar with the traditional music of Korea — Gukak — will be captivated by this performance. With her bright smooth voice, this 1997-born “국악소녀” (the Gukak lady) is like a breeze of fresh air to our K-pop-ridden scope of interest. She once said in an interview, “I want to give some modern twists to my music. I hope I will perform more sophisticated, more modern, rich gugak, while keeping the traditions themselves alive”. It seems like So-hee is keeping her words with this performance.

Have you ever seen K.Will dance?

Established since 1985 as one of the most prominent heavy metal rock bands of Korea, Boohwal has survived changes in membership many times to remain active in the music industry. In 2014, Immortal Songs 2 witnessed their comeback with a new vocalist and the same passion.

Released in 1967, “The White Handkerchief” is a beautiful folk song that is well remembered by many. Choosing such a classic to perform, Boohwal once again proves that the group still maintains a wonderful capability to connect to the audience. In this performance, where the lead guitar, the powerful vocal and the special Youth Choir all harmonize so beautifully, good old memories resonate among listeners and the performers become united with the audience.

The prominent crossover tenor Im Tae-kyung is the prince of the stage whenever he performs. To choose only one single performance by Tae-kyung is an incredibly hard task, as every time this man sings, he pours his heart and soul into it. With a background as a famous musical actor, Tae-kyung tends to be quite theatrical in his singing style. Yet he never lets this feature deter himself from being creative with various genres. “Bird Song” is a traditional Korean folk song, and Tae-kyung has interpreted it into a modern rock track about hope and dream. Considering the fact that the singer has just recovered from a vocal chord problem that almost cost him his singing career, the song holds an even more special meaning.

This list is compiled based on our limited knowledge and subjective judgement. There are many other amazing performances that we have not included here. So, Seoulbeats readers, what are your personal favorites from Immortal Songs 2 by non-idols?