The Calm After The Storm: EXO's Debut 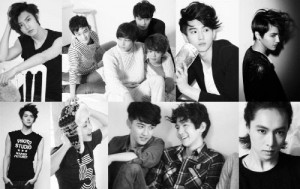 From my little time of following K-pop, one thing I’ve learned is that, for an idol group, you haven’t really debuted until you’ve performed on one of the four weekly music shows in South Korea. Sure, you can release music video after music video, perform live at various venues, anything; but until you’ve made it onto Music Bank, there is a sense of incompleteness. Also, the way the K-pop industry is constructed means that live performances on music shows is one of the main ways to promote and sell music, so anyone who wants to make it big has to run the gauntlet of music shows.

Of course, this is all relative to mainstream K-pop, and it doesn’t get anymore mainstream than SM Entertainment. The road to debut that their latest boyband Exo Planet have taken has been an extreeeemely long one–100 plus days, in fact, which at least tied in nicely with the significance of the first 100 days of a person’s life in Korean culture. Nice one, SM, I see what you did there. 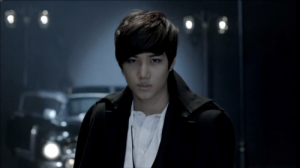 Natalie talked about this in her review of Exo’s “MAMA” MV, and like her, I wasn’t interested in Exo that much either, beyond the novelty of debuting two groups to perform the same songs in different languages. Seoulbeats itself covered this aspect back in the early days when all we had was a photo album of a dozen very pretty boys, and the main conclusion drawn was that Exo-K would benefit greatly from the Hallyu phenomenon while Exo-M would be left in the dust. The first teaser, featuring some guy called Kai, piqued everyone’s interest, as did the second and third. But we all know what happened after that (hint: Kai), and soon people lost interest. As far as I know, no-one in K-pop has had this many teasers — let alone teasers of such high production value — for anything; it was almost a shame that so much of it went to waste because they all seemed to feature the same person. The only saving grace for the teasers was the music featured in them–“Angel” (previously known as “Into Your World”) and “My Lady” were at that point some of the songs that piqued people’s interest, if somewhat mildly. 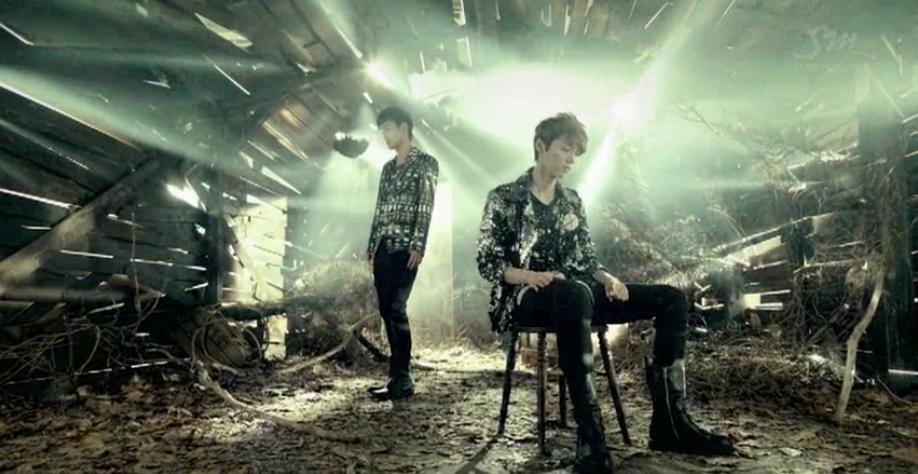 But then “What is Love” happened. Personally, I think this is when the crazy fangirling started too, especially after I saw the Mandarin version. So, Lu Han can dance and sing in addition to looking like the most precious snowflake to drift down to Earth? The opportunity to stan someone with actual artistic talent (sorry, Minho), and from the very beginning, was too good to miss. I think after that the teasers started getting sparser as well, and suddenly all these people who used to purposely avoid teasers were like “It’s Tuesday. Where is my new teaser? WHERE?” I know, because I was one of those people. Following all those dance-heavy teasers with a R&B ballad was quite the curve-ball, but it went down like a treat with many K-pop fans. And the second prologue single (that is such a silly term, I do not want it catching on) “History”, while more along the current dance song style, managed to sustain interest by revealing all 12 members in a performing capacity. In my opinion, the prologue singles were crucial to SM’s slow burn campaign–they really built up hype and expectations, and because they were longer than teasers, they were able to sustain that hype for a longer period of time. I honestly cannot see this approach working with only teasers.

And the showcases just made everything bigger. Previous SM acts have performed at showcases pre-debut too, like SHINee at the 2008 SM Showcase, and DBSK in fact debuted at the televised BoA Kwon & Britney Spears Showcase; and while established K-pop artists have used solo showcases as a way to introduce themselves and their material to foreign markets like in Japan, I don’t think anyone has held a solo showcase in Korea for a pre-debut group on such a grand scale. And don’t forget that they held a showcase in Beijing the very next day–so that’s two showcases that almost felt like concerts. SHINee performed for just over three minutes at the SM Showcase; EXO had their showcase uploaded to the SMTOWN YouTube channel in four parts. And that was just the one in Seoul.

SM has poured a lot of resources  into this group and their debut. From this, it seems that SM’s ultimate goal is to create an aura of majesty and otherworldliness around Exo to elevate them above other rookie groups and make them appear as untouchable as possible. Groups like SNSD and Big Bang had reality shows which allowed us to familiarise ourselves with the members before they debuted, but SM purposefully kept fans removed from Exo, even while using social media sites like Facebook (oh, the irony). The way SM was going about it, you’d think they were the second coming or something. Hell, it was Easter Sunday when the “MAMA” MV was released.

The anti-climax for me was the actual MV. considering the way the prologue singles really built up this storyline they had going for EXO and their two 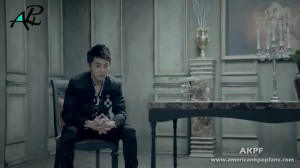 suns and NBC Heroes powers, I was expecting a lot more than pretty boys sitting around and doing essentially nothing. All that excitement and anticipation inside me just went poof and vanished. Had it been any other group, or even the same group with a less hyped debut, I would’ve liked it–in fact, I actually do like it; it just wasn’t what I was expecting. So, by the time the live stages rolled around, I was in a bit of a funk.

I was expecting Exo-K to lipsync; SM artists seem to have fallen into this habit of lipsyncing the first comeback stage, especially after they ended their MNET boycott, so I figured that Exo-K would be following that pattern as well. Furthermore, I wasn’t too upset because they’d have to sing live at some point, and I could just see them then. I didn’t realise the lipsynching would become such a big deal, though. But considering that all the group performances at their showcases were mimed too, the lipsyncing at Inkigayo is hard to digest. SHINee and f(x) both sang live at their debuts. Sometimes I wonder if it isn’t another tactic to keep us all hooked, because we’re all going to want to tune into M Countdown on Thrusday to see if they can really sing live. What a way to sustain interest, SM. Surprisingly, the only live singing to actually happen came from Lu Han, who sang a couple of lines from a song by a veteran duo being bestowed with an honorary award at the 12th Chinese Music Billboard Awards Ceremony, where they had their debut stage (they also wore suits on the red carpet, which was the best thing that had happened to me all day). I’m pretty sure they lip-synced “MAMA”, though.

You’d think I would have learnt by now, wouldn’t you? Everyone tells me not to take (eye)candy from SM, but I fall right into their trap, time and time again. Honestly, I think it’s shame on me that I believed all the hype and ended up with something that is fine, but appears to me as too ordinary. Coming down from that kind of high is never fun, but then, I did willingly buy into the hype; after all, isn’t that part of the appeal of K-pop? But in the end, SM achieved what it set out to do in getting their newest boy-band out there in the public eye, in the flashiest way possible. Unfortunately, I still feel like I’ve climbed up a tall mountain to see the incredible view of the world from the peak, only to reach the top and be confronted instead with a plateau stretching to the horizon. If that imagery made sense to you, then congratulations, SM has successfully addled your brain like it addled mine.

At the end of the day, EXO has officially debuted, and I’m left thinking: what now? For starters, I’m going to have to wait until the next round of live shows to see EXO-K actually sing. Then, they may appear on some shows, do some more interviews, and then they’re off to SMTOWN LA. Soon enough, they’ll become just another group in SM’s roster, churning out material for their fans buy and make their company more moolah. And Kai’s going to be everywhere. 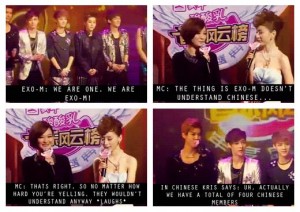 Exo-M are the subgroup that interests me more in this respect; technically speaking, they are not even part of the K-pop industry, but they are a product of it. They conducted themselves laudibly at the 12th Chinese Music Billboard Awards Ceremony, even in the face of some very insensitive remarks; it’s not going to go away overnight, but I do hope that things will get better for Exo-M. Because the Chinese music industry is different from the Korean music industry, there won’t be as many televised live performances, but more variety and talk show appearances. In fact, less media commitments may well be a boon for Exo-M, as they seem to have the time to accompany Super Junior when they bring Super Show 4 to Indonesia and Australia. They are going to have more varied experiences, and while they fall out of the sphere of K-pop itself, I’m looking forward to following them in my spare time. Hmm, I guess my bias is showing? Oh well, I can’t wait for Exo-J either, whenever SM decides to make that happen.

So, that’s my experience of Exo’s debut; what was yours like? Did you get swept up in the hysteria too, or were you wise to SM’s tactics?