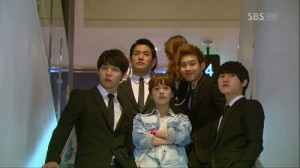 Another week, another 5 Things to love in K-pop.  If you’re not up to date on your K-pop addiction beware, because spoilers will most definitely ensue. This week in K-pop we saw Urban Zakapa return with a “Beautiful Day,” C.N. Blue took first place on Mnet’s M! Countdown for “Hey You” (personally I love “Still In Love” more), and comedian Jung Ju-ri says she’s got 3 billion won to her name as a bonus for the lucky guy who ends up marrying her.  What 5 Things happened in K-pop last week that I think were a bit more special than the rest?  You know the drill.

Just last week, I spoke of Kim C‘s comeback with his album Priority.  On April 3rd, he released the MV for his title track “Love” starring recently-returned-from-the-military actor Jo In-sung.  Sometimes, nothing is more beautiful than something simply done, and this, is one of those things.

Who knew the ajusshis of Shinhwa would be so funny?  I saw glimpses of it when Jun Jin was on Family Outing, but wow this is becoming a habit.  As a continuation of their “special” Olympics, the men participated in making funny faces and ‘facing,’ which is better left for you to watch than for me to try and explain it.  Here’s the championship match between Shin Hye-sung and Andy, but make sure you’re not watching with a full bladder or you just might pee your pants.

I’ve said before that the Joseon men in modern South Korea schtick would get old sooner or late in the drama Rooftop Prince.  But I guess that time hasn’t come yet.  The writers are doing a good job of integrating these little gems here and there in the storyline to keep the jokes fresh instead of boring.  Here Jung Suk-won as Woo Yong-sool gets defeated trying to storm the building not by the two security guards at the entrance, but by its revolving doors.

It was another cracktastic epsiode of the YG Family special on Strong Heart. And from Taeyang‘s overzealous “Fantastic Baby” to Tablo being frightened by Psy‘s dance moves–it was definitely something that shouldn’t be missed.

Lee Seung-gi really is a quadruple threat: singer, actor,variety star, and with his stint on Strong Heart, skillful MC.  A lot of credit goes to Kang Ho-dong who groomed him as his sidekick on the show, but after Ho-dong’s departure Seung-gi held his own with his quck wit and playful attitude.  Lee Seung-gi you will be missed in K-variety, best of luck in your new endeavors.