SISTAR, SISTAR: More of the Same? 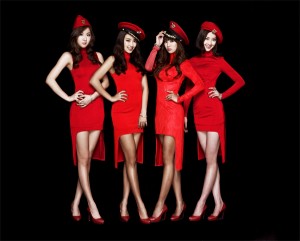 I know I’ve said it before, but I’ll say it again for posterity: I am a huge fan of girl groups.  SNSD, Secret, T-ara, KARA, 2NE1, miss A — I could go on, but you probably get the idea, yes?  I think it’s fair to say that I’m simultaneously astounded, disgusted, intrigued, and bewildered by the total hot mess that is the female idol manufacturing mill; it’s a combination that has kept me coming back for more since 2008.

And yet, every once in awhile, a girl group shows up that I just….can’t really get down with.  Nothing about their promotions really captures my interest, their songs don’t strike a chord with me, and/or something about their image subtly bothers me.  One of these groups is definitely SISTAR, who have announced an imminent comeback with the single “Alone” and an international showcase that will be available on Youtube in over 40 countries.

Now, don’t get me wrong — I don’t levy against SISTAR my usual horde of complaints, most of which center around the absolute uselessness of certain members or overall lack of talent within a group.  That isn’t the case at all here.  In fact, I’d go as far as to say that SISTAR is packing a pretty decent vocal punch as compared to other idol girl groups.  Hyorin is consistently voted as one of the most talented female idol singers in the business, and while I’d be the first to argue that most polls are arbitrary and backed up by fake science or statistics, her numerous successful appearances on Immortal Song 2 more than indicate that she is objectively worthy of this title.  So-yu, too, is a solid vocalist; while she’s no Hyorin, she holds her own well enough and (especially when measured against certain members of other girl groups) is actually quite good.  Bora isn’t the worst rapper I’ve ever heard (she’s probably on par with Secret’s Zinger, at any rate; you can make of that what you will).  And…well, alright, I’ve kind of got nothing to say about Da-som, given that I’m completely unimpressed with her, but three out of four isn’t bad.

So SISTAR’s vocals aren’t really the problem.  What gives, then?  Oh, that’s right — every single one of their songs has been (at least to my ears and eyes) a gimmicky, cheesy, cheap, over-the-top, sexified disaster.

Maybe that was harsh, but bear with me.  SISTAR’s songs are some of the most unimpressive, generic, and forgettable in the entire world of K-pop.  More to the point, it’s almost impossible to find any sort of stylistic progression or growth in any of the singles that they’ve promoted; since they debuted in 2010, it’s been one techno-inspired, poppy dance track after another.  Probably not surprisingly, a whole bunch of their tracks were produced by Brave Brothers.  Worse still, none of their songs have adequately showed that any of the members possess any talent whatsoever — in fact, it’s probably true that if Hyorin hadn’t promoted herself on Immortal Song 2, there’s almost no way that anything about her live performances with SISTAR would have convinced me that she wasn’t a completely mediocre singer. 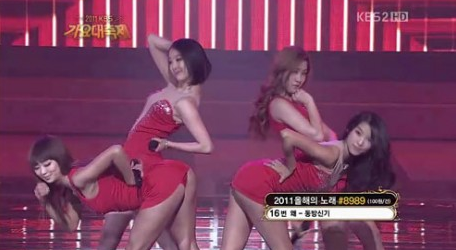 In lieu of relying on solid vocals to carry them to a point of respectable fame, it seems to me that SISTAR has attempted to overdo it with The Sexy.  Every single one of their dances in some way emphasizes their asses (seriously, what is up with that?  They’re always waving their hands around them in order to draw attention to them!) and their outfits consistently look cheap, tawdry, and are accompanied by the shortest shorts and skirts they could possibly squeeze those girls into.  As I’ve said in the past, I don’t mind expressions of sexuality in K-pop at all, but I mean, come on.  There are ways of owning it (example: Brown Eyed Girls), and then there’s “Hey, look at me!  I’m sexy!  Wait, didn’t you notice?  Okay, here’s a gratuitous shot of an ass shimmy!  Let me repeat that for you a couple dozen times!  I’m sexy, right?”  Enter SISTAR, stage right.  Nobody should be surprised that an uncle fan once gave So-yu a lump of cash and a designer handbag.  Also, anybody remember Bora’s wet t-shirt body wave?  Classy!

I really hoped that SISTAR was going to turn it around for the next round of promotions, and at first, I thought I was going to get my wish — their teaser photos for “Alone” looked sleek, sexy, and indicative of some sort of concept evolution.  But it turns out that Starship Entertainment was just trollin’, because the four teasers that they released indicate that we are set to receive nothing but more of the same.  And for the love of god, it’s another track produced by the Brave Brothers.

More techno, more in-your-face sexy, more barely-there clothing.  Sure, maybe it’s a bit of a more mature look than we saw when they debuted with “Push Push,” but the overall idea is the same, isn’t it?  Plus, this kind of has “banhammer” written all over it, especially Hyorin’s teaser — is that an alcoholic beverage that you’re imbibing?  And are you undressing?  Okay then.

Look, SISTAR.  I could totally get down with you guys.  Properly promoted, you girls have got the total package — you’ve got the vocals, the looks, and you know, as much as I hate to admit, you’re pretty fierce.  But enough with the cheap gimmicks already!  Ditch the Brave Brothers and promote a song that won’t make you look like you’re purposefully baiting uncle fans, one that shows off your talent and swagga.  You’ve got the potential to be serious competition for the other girl groups in the market, but your music and concepts are seriously holding you back.

Though I’m not optimistic, I’ll be awaiting the release of SISTAR’s new music video, hoping desperately against hope to not be disappointed by this group for the umpteenth time.

What about you, Seoulmates?  How do you feel about SISTAR, and what hopes do you have for their comeback?