“When the cold winter passes, the spring comes.” — J-Hope

Boasting a theme called “The Wonder Year,” SBS Gayo Daejeon brought comfort and catharsis in equal measure to viewers. The show dealt in something called perceived emotional intimacy, which the MCs state almost directly in the introduction. Emotional intimacy is the magic of live performance — it is how artists make us feel like we are actually there interacting with them, along for the journey. This year, with everything pre-recorded in Daegu because of COVID-19, this magic was carefully constructed in the way each group or artist chose to utilize their time on the “Wonder Stage” Some artists knocked this out of the park, making the viewers experience liveness and heung despite the lack of audience.

Maybe it is the musician in me (professional background in teaching and performing here), but part of what I love about live music performances is the rawness and authenticity — not necessarily hoping for mistakes, but little details that show something new that fans otherwise could not experience by just streaming daily. Some of my favorites are impromptu ad libs, new choreography, fresh outfits, or live vocals that can be heard within the backing mix. Don’t get me wrong, studio versions are amazing, there are effects and elements that cannot be replicated live, but part of what makes these music shows special are being able to connect with artists and performers beyond something you could stream on Spotify or YouTube.

Especially in a year full of uncertainty, fear, and loss due to unforseen and unforgiving circumstances, fans are often chasing connection and empathy rather than just strength and courage. In this regard, there were a few groups that stood out while others failed to offer really anything fresh or new. Standout performances include Stray Kids, BTS, Seventeen, G-idle, Got7, Monsta X, Ateez, Jessi, and Treasure. Some of this variety obviously has to do with the time allotted to performers by SBS, but presumably each group (and their respective companies) were given the choice of how to best use their time.

The night started out sentimental, discussing lost opportunities, regular life we took for granted, and hope for a better, more connected future. Lee Juck, Got7’s JB and Youngjae, and Mamamoo’s Solar and Wheein collaborated on a song called “Things We Took for Granted.” The music is simple with meaningful lyrics that allow each performer’s vocals to shine through and connect with the hearts of the listeners. Lee Juck’s songwriting and vocal prowess are on full display here, as well as his accommodation for the other singers’ vocal styles.

The most surprising performances for me were Stray Kids, Got7, Monsta X, and Treasure’s. Not only were these performances fun, but they really showcased performance energy that exemplified all that multimedia liveness had to offer. While live vocals aren’t always a priority, personally I do have a soft spot when groups do take more of a risk and showcase live vocals alongside their choreography or ballads. There were some nice Christmas or holiday versions of songs, but most of them just had some more holiday-sounding percussion infused to their existing mix. Some of them turned out to be cute while others sounded moderately contrived.

I found Treasure’s to be an especially surprising and powerful performance. They had relatively solid performances, enjoyable dance breaks, and a presence that felt strong, especially for rookies that debuted so recently. I do wish they had more live vocals and took more risks, but their dance and performance prowess were unmistakable.

Stray Kids’ performance was full of new choreography (similar to their “Online Unveil” live stream concert if you caught that last month) and ad libs that really made the performance feel borderline chaotic. The knife and pot choreography was a daring and satisfying new element that was not present in their initial promotions for “God’s Menu” and their live vocals were stable and powerful, often overpowering their own live mix at times.

Ateez — known for their powerful performance energy — also had a great live performance. Despite the absence of one of their rappers, Mingi, the members showed awesome live vocals, even redistributing Mingi’s rap lines between Hongjoong, one of the other rappers and Seonghwa, one of their vocalists. Their performance included “To the Beat” and “Thanxx” as well as “Gang” as part of a throwback section of the show.

In addition to the usual holiday offerings, this year’s show also featured vintage and retro sections including “My House” by 2PM, “Roly Poly” by T-ara, and “Gang” originally by Rain (among others). It was interesting to pair these throwbacks with holiday songs within in the same show, but because of the resurgence of retro dance trends of 2020 and continued international Kpop exposure, it makes sense. “Roly Poly” and “My House” were especially satisfying. A short section of the show even featured MCs Heechul and Boom as retro DJs.

In the same retro vein, Got7 and Monsta X were given substantial joint time slots that explored their new music as well as performances of their debut tracks and outfits. A short (awkward) interview with both Got7’s JB and Monsta X’s Shownu talked with the MCs about trying to channel their debut energy and how their careers have progressed following their respective debuts.

Both Got7 and Monsta X had amazing sets with powerful performances and incredible live vocals. Got7 often have live vocals in their mix, but Monsta X are often a mix, relying on main vocal Kihyun and the leader Shownu for the bulk of their live mix. Both groups have a fun rawness that comes through in the performances.

Got7 started with a very short excerpt from “Just Right” as well as very stable performances of more recent songs “Poison” and “Breath.” Their vocals are impressive, like many of their live performances, and the variety of sexy and cute between “Just Right” and their more recent releases rounds out their set effectively. Although the songs are well past their initial promotional periods, their performances breathed new life into the songs through the set.

Monsta X exemplified their usual beast-like energy (sorry not sorry) and fatal performance vibes. Not only did they have a throwback performance of “Trespass” but recent releases like “Love Killa” and “Beast Mode” as well. Their vocals are mostly stable, and their rude, sexy vibes are on full display in their performances. Their set was fun, enthralling, and still feel fresh despite including their debut song from 2015. Some of the stage effects feel a bit contrived (I hated the cat scratches in “Beast Mode”), but their performance overall was great nonetheless.

The last section (or episode if you streamed via Kocowa or Viki) begins with a tribute to the Daegu local singer Kim Kwang Seok. The singer, who passed away in 1996, is memorialized through both solo and collaborative performances by Monsta X Kihyun, Gfriend’s Yuju, and G-idle’s Miyeon and Yuqi. The collaboration from The Boyz’s New, Younghoon, and Sangyeon, Monsta X’s Kihyun, Gfriend’s Yuju, and G-idle’s Miyeon and Yuqi is especially nice in its simplicity and elegance. It does not offer much in complexity, but instead allows the performers’ vocals and the inherent beauty of the song to come through. The song originally by Kim Kwang Seok fits the “wonder year” theme well, bringing a relatable, emotional peace that comforts viewers.

Honestly, I was not familiar with this singer before the show, but the depth of the lyrics and simple beauty of the music is a breath of fresh air in an otherwise powerful and emotional show. It is additionally a fitting tribute to a Daegu local, where the show was hosted and filmed.

The last section of the show features big names like Seventeen, Twice, and BTS. Not surprising, Seventeen’s chaos on stage was on full display. In addition to some killer live vocals and choreography, Seventeen also had some amazing ad libs that added a fun dimension to the performance that felt borderline chaotic. Seventeen was overall very upbeat, fun, and solid in their performance. There was also a moment that went viral where the leader S. Coups ad-libed before his rap in their recent song “Left and Right.” He has in the past talked about the confusion over his stage name and chose to put it on full display in this performance. As a fan, it is a hype touch that really highlights how live their live vocals really are in this performance.

Twice, overall, I found to be underwhelming. Their Christmas mixes were cute (even humorous) and their concept and clothes were incredible, but their vocals and choreography are pretty much what I would expect from a Music Bank performance. It was a solid performance, but it did not feel fresh and authentic, especially compared to the surrounding performances. It was a good performance, but I would hesitate to say that it was great or incredible in comparison to what it could be given the members’ collective talents and abilities.

BTS were on par and emotional as always. Their one-take camera work and overall production budget was high, and their performance was intimate and emotional like many of their other recent performances. However, I am not sure I was surprised-which is fine. It was cute, their vocals were obviously stable, and the set was adorable. The addition of Yoongi as a snowman despite his absence was a cute touch that added an amusing dimension to the performance that fans otherwise would not have been able to experience.

There were over two hours of performances, and the mix of comfort, catharsis, and connection was unmistakable. I do wish some groups had ventured out of their usual promotional performance expectations, but overall the night was full of variety and intimacy that brought comfort to viewers. In a year of uncertainty, danger, and social distancing, the offerings for SBS Gayo Daejeon really exemplified the connection that artists and viewers can share despite distance, restrictions, and geographic separation. The interludes between the sections and the MCs really capitalized on these sentiments and brought all the performances together. With the world seemingly uncertain around us, it was nice to have a comforting and cathartic event to attend, even virtually, before ringing in the new year over the holidays.

A Collaboration You Don’t Want to Miss: Lee Hyori and CL 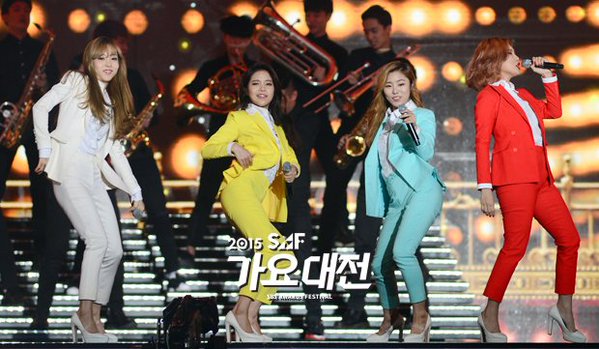