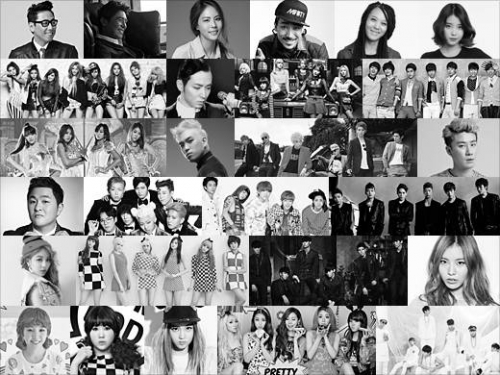 This year the SBS Gayo Daejun was quite an event, tons of fun collaborations and great performances from rookies and veterans alike.

One of the most enjoyable parts of the show is getting to see a bit more creativity when it comes to the set-up. When artists go on music shows, unless it’s the first show of a promotion, it’s usually very much the standard of performing the song the same show after show. This allowed the groups (or at least, the people in charge of the groups) to have a bit more creative leeway.

I wasn’t too thrilled with the opening act. I wanted to be, but I ended up getting a bit bored with the performance and finding it a bit forced. That being said, while the whole show was enjoyable, some stages left a bit to be desired, while others really hit it out of the part with theme, dance, and overall energy. One annoying part however was that, for many performances, the back track was either too loud, or the groups were simply out of synch with the music. The surprising bonus of the technical difficulties, however, is that you really get a chance to judge the vocals of many groups and can pin point the members that are simply “visuals.” If you’re off on your track after all, we can only hear your voice without the help.

Here are some of my personal highlights from the show:

BTS came out with a bang and I found their performance to be one of the better ones. I wasn’t too familiar with the group, but I will certainly be keeping an eye on them after seeing this performance.

Of course, Crayon Pop came out with a bang. Their performances are always fun, and it was great to see the audience members taking part in their choreography. However, they were one of the most obvious groups affected by the back track issues mentioned earlier.

Girl’s Day & A-Pink had an interesting stage that involved a swap of the songs most popular for each of the groups during the year. It was quite nice to see as the songs chosen had polar opposite concepts. A-Pink did sound a bit messier than Girl’s Day when it came to “Expectation,” but each group was best at their own songs.

While Block B wasn’t one of my favorite performances for the night, I feel compelled to mention them for their styling choice: very 80s rock and very fun.

Hyorin was another idol that performed a great act. The rock twist added more “umph” to an otherwise normal, Sistar-eqsue sone. It was, of course, perform beautifully.

I really, really wanted to like SNSD TaeTiSeo’s performance. It started out well, with the retro twist done on “Crazy in Love,” not to mention the wonderful outfits, but when it came to the girls singing together, it wasn’t as cohesive as it could of been. Some times the girls were out of synch, or were simply over powering one another.

4Minute gave us a great performance and a great stage to boot. With the intro being a remix of their past hits, and even including the zombies from the “What’s your Name” MV, it was fun to watch from beginning to end. And it’s always good to see the girls together since, at times, it’s simply the Hyuna Show.

Drunken Tiger, Yoon Mi-rae, and Bizzy, like always, had an amazing performance from start to finish.The act went through four songs and included Eun Jiwon, Zico, Rap Monster, Baro and Bang Yong-guk in their performance.

Lee Hyori and CL were the duo to beat this year. Starting off with Lee Hyori’s “Miss Korea” (and the very lovely stage including Korean females of all ages from all over the country) and easing into “Bad Girls,” CL and Lee Hyori blended the songs perfectly. The energy they exuded in this performance left the entire audience cheering for more and was one of my favorite, if not my number one, performance of the night.

Wrapping up the group performances was none other than SNSD. They started off with “Express 999” and it wasn’t their best. Some of the girls were a bit off-key and it was another case of some girls overpowering the others. But they redeemed themselves with a lively performance of “I Got a Boy” (as long as you can make it through the opening rap).

Which stages were your favorites? Any I failed to mention that caught your eye?