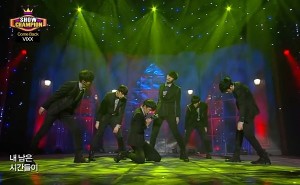 In the world of K-pop, there is one thing that stands out: the sheer amount of music shows artists perform in. In America, with TLC gone, there isn’t a real weekly music show that is easily accessible. We only witness artists performing their singles in award shows and when they are promoting it on different talk shows. But in Korea, the situation is vastly different. At last count, there are seven weekly music shows – Arirang’s Simply K-pop, SBS MTV’s The Show, MBC Music’s Show Champion, and the ‘Big Four’; Mnet’s M Countdown, KBS’s Music Bank, MBC’s Music Core and SBS’s Inkigayo. So when one has been knee-deep in K-pop for some time, it’s no wonder fans are able to not just appreciate these live performances from their favorite acts but are also ably ready to say why.

But what truly makes a live performance shine from the rest? From the poll that you Seoulmates voted in, three artists came out on top for this year: SHINee, EXO and VIXX.

SHINee’s lives, ever since their debut with “Replay,” have always been point on. While we may have witnessed a crack here and there and an off-note as well, especially during their “Juliette” era, SHINee has always been consistent. For their releases this year, you guys have voted three of their songs into first, second and third place – “Everybody,” “Dream Girl” and “Symptoms,”

In first place, and rightfully so in my opinion, is “Everybody.” It shows the accuracy that SHINee has and the ability of SHINee to take on new types of dances. They started as an RnB influenced group and now with a whole different sound, they also bring a dance that is far different from their other dances. Like “Sherlock,” “Everybody” brings to mind of images. In fact, their performances of “Everybody” reminded me of I.aM.mE with the use of images. They conformed their bodies to create images of them as robots to suit the robotic nature of the song. While the song is not the best in SHINee’s discography, the dance is worthy of all accolades one may get.

But when it comes to dancing, SHINee is unparalleled and I can go on forever talking about their dances. But let’s focus on their two big releases this year that also took the first and second place. In second place was “Dream Girl” and while they had head mics on, they made the use of microphone stands in their dance. It’s hard to use props in dances and equally hard when one does tricks with these props. That SHINee did all that they did in “Dream Girl” and still pulled it off was amazing. And because there are props, it was only about time that something would go wrong – and it did when Minho’s microphone stand suddenly broke during their comeback stage. In a show of professionalism, SHINee managed to remedy the situation in seconds and continued on dancing while Jonghyun as the main vocalist belts out another of his famous high notes.

As a whole, their “Dream Girl” promotions were consistent; what more can you expect from SHINee?

The last performance from SHINee is unique in its being the only non-main single to place in the top ten. While it was only performed several times, it is probably the best track out of their latest release. An obvious fan-favorite from the very start, I’m sure I’m not the only one who was happy when SHINee performed the song as part of their comeback stages for “Everybody.” The dance suits the beat of the song and while it is not as dance heavy as their main singles, it is understandable. Like any SHINee performance, they do it with stable vocals, great charisma and sharp dance moves that fit the beat and mood of the song.

Leaving the SHINee World behind, EXO is not that shabby when it comes to dance performances. “Wolf,” had most of the international K-pop community in two corners: those who liked it and those who didn’t. While the dance held promise, there was just something missing and while some may rag of “Wolf,” let’s give some points to EXO for pulling it off and the sheer uniqueness and eye catching performance. Because if not, they will eat you like a mouthful of cheese.

All jests aside, the uniqueness of EXO’s situation in terms of having two sub-units and the sheer amount of members was fully realized in their single of their repackage album, “Growl.” Not only did the song become an instant hit in Korea, but also the international K-pop community accepted it with open arms. And yes Exotics, you can start singing EXO’s cover of “Open Arms” right now. Not only was “Growl” a humongous step up, the performances were unique, especially when one tries to recreate the same effect as seen in the music video.

Honestly, it’s hard for a group with twelve members to each get their time in the spotlight. It took Yesung three months before he got his first close-up. Or was it Eunhyuk? But I digress. This is why the way the live performances of EXO is so genius. By splitting the group in half for a verse and chorus each, the members get their own time to shine without taking anything from the other members. While I am tempted to cite their MAMA stage, their Inkigayo comeback stage has got to be one of the best performances this year. True, it is a pre-recorded live but the way it was shot not only called back the music video, but also showed the dance performance in all its glory.

In K-pop, presentation of the whole package is a big thing so it’s no surprise that the dance is the major factor and in the case of VIXX, this goes hand in hand with their concepts as their dances are influenced by their concepts and this has been magnified with their latest release, “Voodoo Doll,” which ranked in at number five at the close of the poll.

On a personal level, I see VIXX as your typical K-pop group but with a theatrical twist, which may be the reason why I love them so much. Unlike other groups, VIXX’s performances are highlighted by the haunting nature of their concept that is portrayed in every factor of their live performances. No one can truly pull off what VIXX can do and they are K-pop’s resident Princes of Darkness. Their dark, gothic concepts are their unique niche without deviating that far from the tried and tested sound of K-pop. This is made even better because their concepts are also inherently within their dance, making it seem as if we are getting a number from a Broadway show as opposed to a run-of-the-mill performance.

VIXX are not bad dancers as well and some have even said that their dances at times can be very SHINee like with their precision. The only difference is that VIXX is very focused on the use of formation to make images to underline the intent of the song. In “Hyde,” this was seen through splitting the group in Team Jekyll and Team Hyde. In “Voodoo Doll,” they use a skull-pin-microphone as a prop. In the original choreography, when one person stabs another or a part of themselves, the others react as if they have also been stabbed. It’s not just the stabbing which makes “Voodoo Doll” so enticing to watch. It’s also the movements of each member as they imitate the swing of a pendulum and cross their fingers as they sing of hopeful wishes coming true.

With the massive amount of great live performances to choose from, it’s easy to imagine that there are some that one would live to talk about as well. In fact, more than half of the current roster of idol groups is able to pull off live performances in accordance to the factors above. Honorable mentions are Spica’s “Tonight,” Block B’s “Very Good,” G-Dragon’s “Crooked” and Shinhwa’s “This Love.”

All in all, this was a good year for K-pop in terms of releases; one just can’t wait for 2014 to start. If this keeps up, we may just be on our way to having a fantastic 2014 as well, and it all starts with the return of TVXQ.