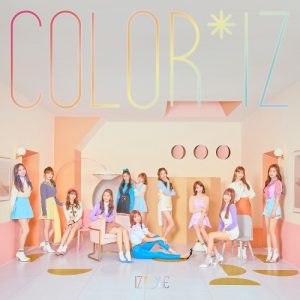 It has been a full thrill ride with the latest season of Produce 101 Season 3 coming to its anticipated conclusion. The intrigue of the show was kept alive by its announcement that the latest season would consist of trainees from both Japan and Korea. Of course, the pushback was immediate. Many netizens saw no need to form a globalized group, especially one with Japanese AKB members. There was a presumption of a rift waiting to happen with their promotion in South Korea, given the sensitive history between both countries and their delicate relationship today. Others however, were instantly hooked, remaining hopeful that the execution of the show’s intriguing premise would follow through to a satisfying finish.

After several controversies and eliminations, followed by yet another EDM remix of the show’s anthem, “Pick Me,” the final 12 girls were chosen under the group name Iz One (stylized as IZ*ONE). Not surprisingly, the results left fans feeling short, with many disappointed that their bias would be excluded from a once-in-a-lifetime opportunity to debut to massive success. If superstar group, Wanna One, was any indication of the rising power of reality formed groups, then Iz One is about to tread into the same public exposure and fame. Yet, no matter what feelings were shared online or the frustration vent, the voting is closed, the girls were chosen, and they have finally released their first single properly titled “La Vie en Rose.”

Getting straight to the point, Iz One’s “La Vie en Rose” exceeded even my highest expectations. The track alone is an impressive demonstration of the slick modern pop sound with an enslaving chorus to follow. The instrumentation is vibrant, showcasing a series of ambivalent sounds that blend elements of synths, flares, and rhythmic bass beats together for the creation of an irresistible melody. It is definitely a track that takes no notes from the past successors of Mnet’s Produce series. The debut tracks of former winners followed more bombastic and grandiose sounds. On the contrary, “La Vie en Rose” adopts a fresh and matured tone. This style choice easily puts their music in line with that of fellow new generation groups such as (G)I-dle‘s “Hann” and Loona‘s “Hi High.”

“La Vie en Rose,” meaning life in pink in French, is not only an enjoyable listen. The music video that accompanies the song presents a pleasant minimalist visual that centers around a palette of colors, most notably red. Unlike the visual debut of I.O.I who ticked off all the girl group’s debut tropes in an underwhelming video, Iz One settles for a more polished and refined take with their first MV. In “La Vie en Rose,” the girls captivate as they express excitement and curiosity, a reflection of their entry into the new stage in their lives. They also manage to avoid replicating the same girl group music video formulas in which conventions of femininity tend to stray into the innocent schoolgirl cliche. 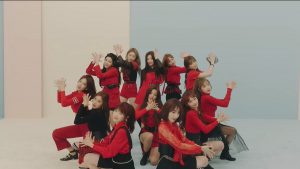 Dressed in an ensemble of high fashion red costumes, the MV opens with a captivating dance number that sets the tone for the rest of the narrative. Each member is seen wandering around the dull colored landscape only to discover objects of pigmented red that catch their interest. Of course, these items are only a representation of an intense feeling of discovery that lingers even after a sugar rush has died down. Not only does Iz One physically try to replicate this feeling through their dance number, but their lyrics also demonstrate the idea of revelation and passion.

This feeling is more like a ruby
Like the sparkling that I’m feeling
If you’re being pulled, be pulled now
I don’t wanna make it blue
Imagine your la vie en rose

Although the various sets throughout the MV are stripped down to the bare minimum, the group proves that less can actually create more. The girls have certainly proven their point through the MV’s minimalist aesthetics. The girls seems to be declaring their determination, where they do not want to be distracted by petty and minuscule things at the start of their careers. This is a bold statement, considering the ongoing Blue House petition asking to ban the girls from performing on Music Bank. Furthermore, the girls had to suffer SBS’s petty resistance in deeming their other song, “You’re in Love, Right?” unfit for broadcast as it quote, “contains too much Japanese.”
Certainly, the members never asked for this kind of negative attention. Although some argue it was predisposed to happen with the inclusion of AKB members. Yet, only three Japanese trainees were voted into the final line up, including fan favorite Miyawaki Sakura. It is a far stretch to claim the addition of Japanese members severely cuts down the major Korean presence that Iz One currently emanates. This is why the visual for “La Vie en Rose” is an important testament to the members’ unity. They are focused on projecting their desire for triumph within a hostile environment. This desire to hold on to a sparkling feeling that has taken control of them shines through the color red. Even as their costumes change to full white, the shadow of a rose colour still hangs over them. It is as though a grand theater curtain has been raised for the girls, with the MV reinforcing the group’s readiness to present themselves to the world. 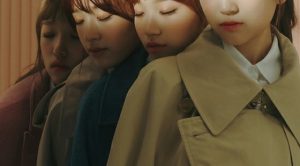 Even as they are presented with an offering of more colors, the girls will not accept. Instead, they linger over one another in a full circle. Their gaze is high on a model of the universe that puts into perspective their sights for the future. At one point, the group is lined up against the wall with the only a crimson red scarf connecting them. This adoring frame not only symbolizes once again their bond as a group, but it sees them exuding a confidence necessary to face the difficulties of being in a multinational girl group. The music video ends where it began, with the girls returning back to their group formation and preparing for the curtain call.
Overall, Iz One has kicked off strongly and could possibly combat for the best group out of Produce 101. The music video for “La Vie en Rose” is an inclusive representation of each member, adding to the audience’s viewing experience. The visual brilliance shows just what the combination of two countries can accomplish in forming a superstar group with potential for global success. If this video is any indication of what the group is capable of, then they are sure to achieve plenty more victories during their two-year promotional cycle within and outside of Korea.
(YouTube, Soompi [1] [2], Images via Off the Record Entertainment)