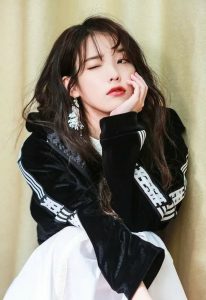 Singer-songwriter IU just recently celebrated her 10th Anniversary, debuting at the young age of 15 with her first single “Lost Child.” This was a very special celebration for both IU and her fans as it marked a decade of her musical progression and her influence as South Korea’s “Little Sister.” To commend her successful career and as a treat for fans, IU released the single “BbiBbi” which became an instant hit, breaking records on Melon, all while handing out warnings to her haters that she won’t be patronized.

Indeed, IU has had a very successful road to stardom but not without the scandals, bullying and the constant critiques from the public. Yet, IU has managed to combat the various misconceptions people place upon her, letting the quality of her art speak for itself. In this Side B, I want to delve into the massive discography of  IU and highlight several career gems that showcase not only her talent as a songwriter but how much passion and artistry she puts in her work. This may only be a small view into her world but it definitely mirrors the broader brilliance of IU’s musical career.

Tucked under the theme of “French Black,” the song “Everyone Has Secrets” featuring Gain of Brown Eyed Girls appears in IU’s second full-length album, Modern Times. Musically, I would argue that Modern Times is among the best – if not the best – IU album to date. The album was a departure from the wholesome image she managed to obtain since her massive hit “Good Day” and instead focuses in on IU’s darker and mysterious side. The track truly captivates with its intense instrumentation combining swing, jazz and a touch of samba. Gain’s voice adds another level to the track as IU’s vocals complement her seductive higher register all leading up to the song’s sexy and sultry chorus.

The theme of secrets and obscurity is certainly a paradox to IU’s seemingly public and extroverted life. Unfortunately, many have taken her public figure image for granted and use it against her for the sole purpose of stirring up controversy with malicious intent. However, IU declares that it’s not just her that holds on to her secrets. In fact, everyone has their own skeletons in the closet but many seem uninterested to the truth unless it is served with up drama.

When it comes to love songs, IU has the tendency to carry the heart on her sleeve. She has plenty of blissful music videos representing the beautiful moments and the tragic endings that come with relationships. Most recently she was able to portray the bittersweetness of wistful goodbyes and cutting ties with “Ending Scene” in which actor Kim Soo-hyun played her lead. Although not accompanied by a music video, “Obliviate” carries the same mournful sentiment.

If “Ending Scene” was about learning to cut lost love, then “Obliviate” represents the post-breakup stage when seemingly minuscule things in everyday life make the mind wander to the person you once loved. The Spanish guitar and vibrant saxophone with the addition of the fast-paced piano melody make the track feel like it came from the Roaring Twenties Era with a post-modern twist. “Obliviate” is just a sample of the exquisiteness of IU’s genre-bending talent and her knack to incorporate sounds that aren’t particularly heard within Kpop. Just like an end to a relationship, IU is able to forgo the once sweet memories, stepping into a space where she can finally breathe with a clean slate.

Throughout her career, IU has collaborated with an array of musicians, many that she personally takes direct inspiration from. On her much talked about CHAT-SHIRE mini album, singer Zion.T adds to the list of brilliant IU duets with his appearance on the Swing Era song, “Red Queen.” The track is a fast tempo number that is in tune from IU’s Modern Times sound. The lyrical message is also quite direct, illuminating on the fairytale, Through the Looking Glass by Lewis Carrol who pens the character The Red Queen.

Even when she gazed
At the tiniest, poorest of things
Those passionless, depressing eyes
Used to sparkle so bright
Oh red queen

IU’s take on the Red Queen can be seen as a reflection on her career in the spotlight juggling both fame and social pressure. At first, The Red Queen is high on the pedestal with everyone in admiration of her smile and beauty. Yet, over time she becomes quite pitiful, worn out from her publicized lifestyle. All that is left is a sad queen with a gala dress but passionless eyes, her only saving glory is turning to the dark side where at least she can get some excitement back into her life despite how the public will certainly hate her for it.

Even in her most stripped back moments, IU can still create a magical and universal ambient feel with her songs. The track “Glasses” does exactly this with the instrumentation of the stripped back acoustic guitar and the casual playing of the accordion. The turn of the song comes at the chorus where IU changes up the harmony and delivers her lines rather monotonously for a quirky and idiosyncratic vibe. The lyrics are also rather playful as IU confesses that she would rather sink into ignorance as it is truly bliss.

In her confession, IU does not want to think very much about the truth because she doesn’t want to face the disappointment that comes with it. The glasses in the song act as a metaphor that represents reality but IU is too stubborn or smart to put them on knowing if she does she will only see the facts in this world which quite frankly scares her. Instead, she dives deep in her imagination and dictates for herself how the reality should be.

“Jam Jam” might be among IU’s most retro and modern sounded tracks from her discography thus far. The song is sweet but with a bite that pulls you into its addictive chorus melody. The song comes from IU’s most recent and successful album, Palette. The album itself is minimalistic in sound but pulls a punch with its mix of pop and vintage, so well done that she paints her own grand masterpiece.  Again, we see IU blurring the lines between truth and reality, lies and legitimacy. Unlike “Glasses” IU in this take does not care for the essence of truth, in fact, she confesses to needing something fake, something bad to play the fool.

I need some sugar
I need something fake
What does the truth mean? I don’t care
We both know, there’s a limit, it’ll be over soon
Melt me before I cool down babe

With the lies that many believe about IU, it is no wonder that she would rather let time pass and not worry about what the public has to say behind the screen that they would not say to her face. It seems that IU gets a certain enjoyment of provoking her haters by showing them how thick her skin has gotten since her debut. IU definitely alludes a confidence in “Jam Jam” that is not much seen with her earlier discography. But it is a wonderful progress to her character that parallels her grand evolution as an artist.

If you type 이지금 (Lee Ji Eun, IU’s real name) in Korean but with English mode on, you would get “Dlwlrma” which is also the opening song off her Palette album. It only seems fitting that I conclude my dive into IU’s B sides with a song penned after herself. “Dlwlrma” is talking about you. Yes, you! IU is having a direct conversation with her audience, retelling them the story of how she prevailed sadness and hardships to come find the people she most cares about, grateful that they made her who she is today.

There’s a lot of time
At this rate, won’t we live forever?
Hello, my star
Yes, I’m going to see you
Tada! Elegant entrance

The song is the epitome of IU’s musical talent as a singer-songwriter. It is at once charming and mysterious yet hopeful and nostalgic. Like all the best work IU leaves something behind to be desired, a teaser of what is to come not only for the rest of her album but also for her future career as an artist that cares about her craft. She wants to make her fans a part of her life narrative not just placed as on-lookers meant for the sidelines. And if her discography proves anything it is that IU will have many more decades to celebrate.

And honestly wouldn’t it be nice to live with IU forever? A dream!