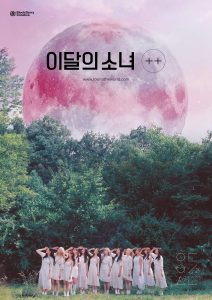 After a pre-debut project lasting 18 months, Blockberry Creative’s 12-member girl group Loona have finally debuted with their EP, “++”. Almost two years after introducing their first member, HeeJin, all twelve members came together to release the single, “favOriTe”, before officially debuting with their main title track “Hi High” on 20th August.

“Hi High” is an upbeat and sugary pop track showing off Loona’s sweet, high-pitched vocals over a retro J-pop-esque instrumental, full of 80’s style drums and twinkling synths. The song opens with a spacey intro with spoken narration, creating a mysterious atmosphere that contrasts nicely with the punchy drums and bright verse melody that follow. This flows smoothly into the pre-chorus, where the members coo “ooh-ah” in unison. 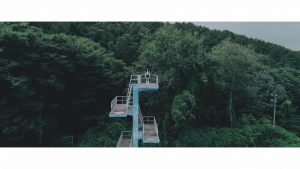 Lyrically, “Hi High” is innocent yet coy, describing the feelings of a youthful girl in love teasing the object of her affections: “I know you’re looking at me, I know better than anyone / But even though I know, I keep wanting to tease you”.

The lyrics are simple and, while nothing special, might occasionally make the listener smile with their innocence (“love is even more cruel than college entrance exams”), though more often the effort to sound like a teenage lovestruck girl comes across as somewhat contrived:

The chorus features a soaring melody that is fairly catchy, occasionally throwing listeners off with a major-to-minor chord switch. The repeated “Hi”’s are reminiscent of the repetitions in Girls’ Generation’s “Gee” (in fact, the whole song seems “Gee”-inspired). Here, though, they become a little annoying, especially towards the end of the song:

The bridge offers listeners a welcome break, forgoing any drums to create a moment of respite from the overwhelming energy of the song so far. This doesn’t last long, however, and like a rollercoaster climbing its final slope, the song ramps up the tension before propelling listeners back to the chorus, with a climactic high note from one of the vocalists (frankly, it’s almost uncomfortably high).

While the song is fun and catchy, with a cute and girly vibe that fits Loona well, it quickly becomes exhausting after a few listens, fatiguing the ears with excessively high-pitched vocals and an unrelentingly fast pace. The instrumental itself is interesting and well-balanced, successfully creating an 80’s throwback with fun synths and retro drums. Combined with the vocals, however, it’s a bit overwhelming – the song might have done better with more variation in dynamics and an overall lower key.

The MV, in contrast with the song, is subtle and calm, opting for muted colours with low saturation and contrast. In it the members run from place to place in slow motion. According to Blockberry Creative, the MV narrates how Loona’s subunits, LOOΠΔ 1/3, ODD EYE CIRCLE and yyxy meet with each other before “soar[ing] to the sky”, referencing their long-awaited debut as a complete group. However, for those who aren’t familiar with Loona, the video feels more like a compilation of running-in-slow-motion clips than a coherent story.

The MV also features an odd mix of industrial locations, from an underground parking lot to an abandoned swimming pool. At one point the members dance in front of what appears to be a giant crane; perhaps symbolism or a reference for Loona fans, but bewildering and unappealing to the casual viewer. This is emphasised with the editor’s choice of colour correction, lowering the saturation and contrast in an attempt to create more of an Instagram-like aesthetic. While it achieves this to an extent, it also dulls the colours, making the visuals of the video less appealing overall.

To their credit though, the range of locations chosen and the lack of special effects make the video feel more realistic, and there is no shortage of beautiful shots, such as the bridge at sunset and the field of long grass. The mismatch with the song may also create interest, convincing viewers that they are more than a typical girl group and that they have a story to tell.

Overall, “Hi High” is a solid debut, setting Loona apart with a catchy and pleasantly retro-influenced song and mature, understated MV visuals. However, the song’s novelty doesn’t last long and it may become grating for some listeners. Similarly, the MV lacks the narrative content and visual impact to really catch viewers’ attention and engage them with Loona’s complex backstory. Like a sugar high, “Hi High” may start off fun and exciting, but its effects will quickly wear off, leaving only fatigue in its wake.