Wanna One's "Energetic" Lives Up To The Hype 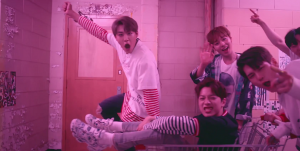 The debut of Produce 101 Season 2‘s boy group Wanna One was greeted with much fanfare and hoopla.  The debut title track “Energetic” was immediately listed at number 1 on the four top Korean music charts including Melon, Bugs, Genie and Naver Music. Additional tracks from the album 1+1 were also seen with high rankings on the charts. The video promptly racked up millions of views on YouTube showing the existing fan base created by the reality show. The quality of the song, however, shows that the group is far from a flash in the pan success. “Energetic” is a sure step in the right direction for the rookie group.

Finding sufficient screen time for eleven members is a challenge the director faced by interspersing individual moments with small groups engaged in different activities. The camera lingers on the members’ faces; giving fans enough time to see their favourite. The group moments are where the members have time to show their personalities: the boys playfully interact with the stage props giving the MV a more dynamic feel apart from the choreography. 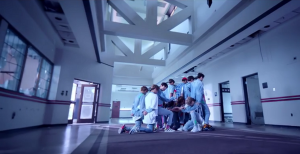 The choreography is more charismatic than cutesy and the members execute it well. The human piano created by the boys’ bodies is a striking moment. Casting Hwang Minhyun as the player is a callback to his ability to play the piano and compose music and serves as a tidy insider reference.

There are many instances where the members are able to highlight key personality concepts. Lee Daewhi, Bae Jinyoung, and Park Jihoon are aggressively cute if unhygienic while eating doughnuts from a bathtub. Kang Daniel, Minhyun, and Lai Kuan Lin are shown working out in a purple gym as if to place them firmly in the designated hunk line. The scenes of the boys playing with each other as a group help to show some genuine images of friendship to recast the boys from competitors to teammates. The lighthearted, affectionate tone of these scenes look unforced and authentic and serves that purpose well.

“Energetic” avoids the tropical house trend and steers instead towards a keyboard driven club sound. It’s a smart move to establish the group with a sound that doesn’t pander to current fads and set them apart from the pack. The track is gradually layered with vocals and synth from the piano lead-in and drops into a pounding kick beat. 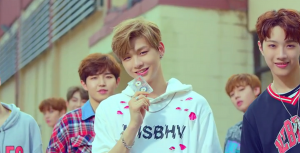 The hook is catchy but doesn’t feel fully developed. If the song is missing anything it would be a stronger chorus. That being said, the vocalists are given ample opportunity to show their upper registers and the high notes in the latter half of the track are attacked with enthusiasm. The rap interludes are less emphasised than the vocal sections but Park Woojin, Kuan Lin and Daniel make an impact in their brief moments.

Lyrically, ‘Energetic’ is a straight love song about a protagonist who can’t control the way he feels about the object of his affection. The chorus describes the dynamic between the subjects of the track while the verses explore how the protagonist feels and what he’ll do for his love.

The song avoids the debut trope of indirectly addressing the group’s fandom, begging for loyalty and understanding. It’s a more sure-footed statement on the direction of the group: they are making commercial pop music without needing another introduction.

“Energetic” is a self-assured foundation for Wanna One to build on for their promotions. The song doesn’t take too many risks but shows off the positive qualities of the members as a team and individually. The hype surrounding the group set expectations high for their debut, and the song doesn’t disappoint. ‘Energetic’ exhibits a level of professionalism and talent that bodes well for the future of Wanna One. If every comeback is as good as this one a year of promotions won’t be long enough.