Weki Meki Lacks Direction in "I Don't Like Your Girlfriend" 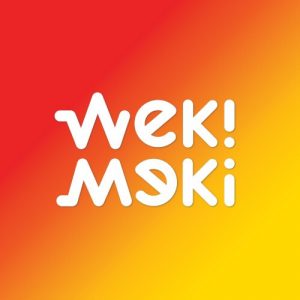 They say that imitation is the sincerest form of flattery but that’s only the case if the imitation is done well. When a hodgepodge of successful tropes are thrown together with the objective being to just be trendy, then that’s when things go awry. Unfortunately for newly debuted girl group Weki Meki, their first single “I Don’t Like Your Girlfriend” has fallen victim to the “everything including the kitchen sink” syndrome.

My inner emo ’00’s kid was rejoicing at the title of Weki Meki’s song, which instantly brought to mind Avril Lavigne‘s hit “Girlfriend.” The message in the two are actually very similar, with both Avril and Weki Meki telling a guy how much she hates the girl he’s with. With Avril, she’s proclaiming that she’d be a better match for him. Meanwhile, Weki Meki puts all the blame on the guy, telling him “You look easy, your face looks stupid” and “I hate you more than her.”

Speaking on vocals or rapping there’s nothing technically wrong or particularly outstanding about what’s presented with “I Don’t Like Your Girlfriend,” which adds to the disappointment regarding the debut. The song itself is so messy that stand out vocals would redeem it but that’s just not the case here. We go from dance track to random break downs and a bit of tropical house sound thrown into the mix. It feels like three or four songs mashed together which is surprising as the composer is Devine Channel, who worked on Hello Venus‘ last album which was fully cohesive in a way “I Don’t Like Your Girlfriend” is not.

The messiness continues in the overall direction of the video. The disjointedness lends to the thinking that there were several concepts in mind but none of them came to fruition. Instead we get a mixture of summer visuals and girl group cliches: sports uniforms (jerseys and tennis outfits), ice cream, and a random school scene. Topped offwith a slumber party and the sudden switch to a dark set and clothing near the end, the MV just doesn’t do the girls justice at all. 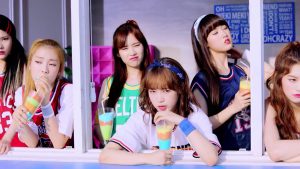 The best parts of the video by far are the dance portions, but they’re all so cut up with hallway shots or you’re blinded by all the neon that you can’t truly appreciate them. In their dance practice and showcase videos, it’s much easier to get appreciate the scope of their dance abilities. If they can manage to produce a better song with the same level of choreography for a comeback within the next few months, I see no reason why they shouldn’t be nominated for a dance award at this year’s MAMAs. If Idol Dance Battle were still around they would definitely be one of the best teams.

What works for some people doesn’t necessarily work for all and trying to combine all the recent trends from popular groups hasn’t worked in Weki Meki’s favor. Tone down the crazy neon and find one (or two) sounds that compliment the whole group, and Weki Meki will easily find themselves on the way to a top spot. For now, “I Don’t Like Your Girlfriend” isn’t their best foot forward. Hopefully they’ll embrace more of their performance strong point going forward.