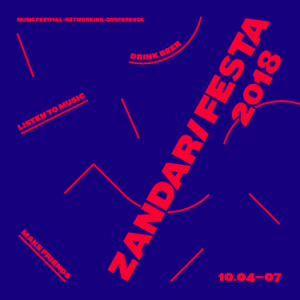 For four evenings every October, Hongdae venues open their doors to the Zandari Festa: South Korea’s largest global music showcase. For the past three years, Seoulbeats staff have made their way to South Korea’s Indie hub to discover new music, make new friends, and bask in the lively atmosphere that makes Zandari such a fun experience. This year will be no exception.

Over the course of the Festa’s six-year run, the event has increasingly emphasized not only showcasing the best of Hongdae’s burgeoning indie artists, but also becoming a truly global event. This year, music industry professionals, 110 acts, as well as fans from all over the world will converge in 8 Hongdae venues for four days of music bliss from October 4 to 7.  Adding to the line up are some of our favorite Indie Gems and Festa alums like Sons of Tiger, … Whatever That Means, Victim Mentality, DIEALRIGHT, Se So Neon, Crying Nut, and Laybricks.

Leading up to the Festa’s kick off this Thursday, October 4, we’ve spoken with a handful of performing acts about what makes Zandari a must-see event, some advice going into the festival, and what to expect from one of the most diverse line-ups Zandai has had yet.

Junhyeok Heo from the South Korean electro-dance / pop rock duo HEO is excited about the Zandari Festa taking place in their neighborhood of Hongdae. For them, as well as many other participating groups, Zandari offers a “fantastic opportunity to meet and hang out with so many other musicians from around the world,” made all the better by all the free beer.

Keeping in line with the increasingly global presence at Zandari Festa, HEO are looking forward to catching some Eastern European acts, and advise first-time Festa participants to “see as many bands as possible each, meet lots of new people, have lots to drink and enjoy yourself.”

You can catch HEO Friday, October 5 at Club Steel Face.

Hellivison, founded in Korea in 2011, are proud Zandari Festa albums. The group pulls their inspiration from psychedelic rock, metal, and jazz, and have toured both the UK and Russia. As such, guitarist Taehun Lee is most excited about the variety of global music they can depend on encountering in Hongdae each fall.

We’ve played at the event for the past several years and it’s sort of become a yearly ritual. Hongdae turns into a great festival for the entire weekend and there’s so much great music to be enjoyed. We definitely don’t want to miss out on being part of one of the year’s best parties.

When it comes to advice for 2018 Festa attendees, Lee encourages participants to not only seek out their favorite artists’ sets but also to pay attention to the acts playing before and after.

Although Zandari Festa is designed to be a club hopping festival, the organizers put a lot of effort into ensuring all the venues have a great lineup of artists each night that complement each other.

Hellivision will be playing Rolling Hall on Saturday, October 6.

For garage rock enthusiasts like myself, Billy Carter is another must-see Korean act, who will take the stage Friday, October 5 at Veloso. Like with Hellivision, Zandari has become a tradition for the trio, who have played the Festa for the past several years. When it comes to acts they’re most looking forward to, vocalist Jiwon Kim has his sights set on the international acts:

I’m so glad to see KoKoMo from France returning to Korea and there are so many other international acts playing a wide variety of genres coming to Seoul for the festival which is a very exciting thing. I’m still checking out everyone in the lineup and I want to see Clea Vincent play because I liked her music videos. I’m recently very interested in female acts in the indie music scene.

Proving Zandari’s variety of genre is folk singer-songwriter Kim Sawol, who explained why the Festa is so important to her as a musician:

Zandari Festa is the biggest music festival in Seoul’s Hongdae area. We can meet and spend time with a variety of music industry people from around the world at this festival. Participating in festivals such as this will help me teach other people about my music and hopefully lead to more opportunities to perform in other countries.

When it comes to acts she’s hoping to catch, Belgium’s Wanthanee tops Kim’s list with her “dreamy” voice. Kim Sawol will be playing Veloso on Friday, October 5.

Of course, Zandari wouldn’t be such a global affair without a plethora of international acts. American EDM artist Chad Atkins will be visiting South Korea for the first time to perform at the 2018 Zandari Festa. Not only will this be his first time traveling outside of the USA, but his first time performing at a music festival. Understandably, he’s most looking forward to sharing his music with a new, international audience — and his first “real Korean BBQ experience.” He’s also eager to celebrate fellow American group YOJA who will be performing Friday, October 5 at the Con-vent.

When it comes to what to expect from his set, Atkins plans to perform through a good chunk of his discography, to share as much as he can with new audiences:

My Zandari Festa showcase will consist of me playing through my entire debut album, Stories, in addition to an EP that I released entitled With You – EP.  My live setup is a combination of a non-traditional DJ set up mixed with live elements, such as my own voice, keyboards, and a drum pad with crash cymbal.

You can catch Chad Atkins at Club Steel Face on Saturday, October 6.

Also experiencing Seoul for the first time is French keyboardist and vocalist Elodie Charmensat of the synth-pop hip-hop duo, Holy Two. The duo plan to make the most of their time in Seoul by soaking up the culture, new musical influences, and meeting new people. And those new experiences may provide a lot of inspiration as Charmensat teased, “maybe we’ll even write and record new songs for our next album while we’re [in Korea].”

Holy Two will play MUV Hall on Saturday, October 6, and encourage new listeners to stop by their set and enjoy the global exposure they hope to provide:

We’re from France and we think that due to our culture our music may be different than what people have experienced before. We make every show unique and we always try to give our all on stage as if it was the last show.

Taking place from October 4 to 7, the 2018 Zandari Festa is guaranteed to be a good time. To check out the full line up, head over the Festa’s official webpage. For Indie fans in South Korea, I hope to see you there this weekend! And for the rest of our readers, stay tuned for our annual post-Festa highlights. Who knows, you may discover your new favorite indie artists.