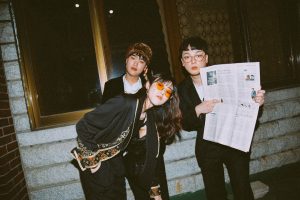 Whoever thinks that once you’re into K-pop you’re stuck there doesn’t really have a taste for music at all. Trust me, sometimes the very mundane or (less scathingly) more mainstream can clue you into something truly magical. This is the case with band Se So Neon.

I blame DEAN for most things that happen to me in my life nowadays. This just so happens to be one of the good things. Lead guitarist and vocalist Hwang So-yoon did the guitar work for DEAN’s latest release, “Instagram.” The sparseness of the sound, its seeming hollowness added a layer of desperate emptiness to the song. At once delightfully bright and achingly forlorn, Hwang’s guitar backbone is a huge part of what makes that song the gut-check it is.

Her ability to craft emotion with her guitar is second only to the utter brilliance that is her voice. With shades of Carly Simon, Norah Jones, and Corinne Bailey Rae, there’s a twist and turn to her timbre that speaks of hard love, nights spent tossing and turning in a mean sleep. It was a performance of “Instagram” on Yu Huiyeol’s Sketchbook that shattered everything I knew about female vocalists from South Korea. Hers is a subtle bit of blues, matured and aged like a really fine cognac. It’s smoky, full of air yet strong enough to carry the weight of her guitar.

Of course, I had to find out where this voice came from. Thus I came across the entire band itself. Hailing from Seoul, South Korea, under BGBG Records, Se So Neon is a singular band among an abundance of indie bands coming out of South Korea. A combination of Tom Tom Club, the Smashing Pumpkins and a little bit of Deep Purple and early Aerosmith when they get an itch to smash up the place with heavy blues-rock, their work is unrushed, relaxed and full of soul it’s unbelievable.

What’s even more unbelievable is that all that old-school heat comes from a trio of musicians. Drummer Im Kangto has a level of sophistication about his playing that speaks of being reared in jazz. However, when he really gets a bug in his gut, something he’s got to get out, the man plays like he’s possessed. He might seem like he is thrashing with no compulsion, but it is really a skilled drummer’s controlled chaos (as in “The Wave”), and takes the band to heights that set them on a plain above their peers in the genre.

Of course, a band is nothing without the bassist. Moon Fancy is also very measured in the way he approaches his instrument. He knows how to play a pattern into a song where the melody could threaten to overtake their unity. He acts as a guide in a wild forest that seems to grow and change as they walk through it. With his foundation, Se So Neon can shift focus in a song without losing the overall narrative (single “A Long Dream,” when the track shifts from playful whimsy to the psychedelic machinations of very skilled technicians).

It goes without saying the focus of the group is its vocalist and guitarist, Hwang. However, she’s one part of a very cohesive whole. For Se So Neon to actually function with the poise and proficiency that they do, each member is necessary, carrying a needed element to make the sound as full and heartbreakingly gorgeous as it is.

Their debut EP “Summer Plumage” is a testament to just how masterful they are at their craft. From the quirky pop of songs “I’m Watching a Loneliness Just Arisen” and “A Long Dream” to the down-home blues-tinged rock of “Summer Plumage” and “The Wave” to the jazz inclinations of “Gurumi,” it is an album music connoisseurs salivate over. So steeped in the earthy grit and soul of the blues and the measured elegance of jazz, the album showcased that “indie” doesn’t necessarily mean a lack of skill (oftentimes overlooked because of the blistering passion of the artist or band). It can mean very profound, technical, cerebral work that leaves you reaching, aching, begging for more.

So I reiterate, if you found yourself getting into K-pop or the more rapidly mainstream K-R&B or hip-hop and sort of got stuck there, you’ve no one to blame but yourself.