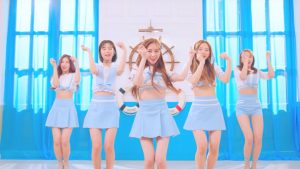 Fresh rookies Elris have made a comeback with their third mini album, Summer Dream. Though they are still young as a group (they just celebrated their first year anniversary at the start of June), they have been gaining popularity both domestically and internationally, leading to their achieving the Best Rookie Group (Female) award at the recent Korean Entertainment Arts Awards.
Their maturity as artists show in this album, perhaps owing to the fact that all five members have been through survival shows (Sohee and Karin were contestants on K-pop Star 6, while Karin, Bella, Hyeseong and Yukyung participated in Mix Nine). As a whole, Summer Dream highlights the strengths of both individual members and the group.

Befitting of the season and the image of Elris, the brightness of Summer Dream stands out right away, thanks to the emphasis on rhythm evident in all of the tracks. The title track “Summer Dream”, which kicks off the album, is pretty much a classic girl-group summer release. It opens with an energetic electronic-infused chorus sung by lead vocalist Sohee, has a catchy melody and sweet vocal harmonies peppered throughout the song. What keeps this song from being cliché, however, is its use of percussion as transitions from part to part. The percussion between the chorus and the bridge was a particularly interesting stylistic choice. Apart from allowing the members to have a dance break, it also emphasises the pulse of the song, which is strong and lively from the start.

Even in “Lovely”, the token ballad of the album, the beat plays a prominent part, and is highlighted using various types of percussive effects. In the slower, more emotive verses of the song, simple finger-snapping is used, but as the song progresses, alternate beats are added, up till the chorus where the rhythm built up, both in instrumentation and in the members’ singing. This creates a ballad which is both sweet and cheerful, in line with the light-hearted lyrics speaking about a longing to reciprocate the love shown to them, and to take care of their lovers (the direct translation of this song’s Korean title is “I Want To Take Care of You”).

Summer Dream is cohesive, and transitions nicely from more upbeat dance tracks (“Summer Dream”, “Will Be Mine”) to more laid-back tracks which still retain brightness and rhythmic sense, keeping in line with the theme of this album and Elris’ musical identity. While the first two tracks feature heavier instrumentation and percussion, the last three tracks are more subtle, allowing the members to shine with their vocals and raps. The final track, “Focus”,  has the most subtle instrumentation, especially in the verses, but it works as the members have to build up the tension of the song with their voices alone, which they did successfully. The melody is a particularly complex one as well, with multiple challenging notes in the chorus.

Placed in the middle of the album, “Talk To Me” is the perfect transition song between the two styles Elris showed. It contains the flashiness of the first two tracks but has a relaxed beat which adds to the laid-back vibe of the next two. Produced by VIXX‘s Ravi, this is the standout of the album in terms of catchiness, thanks to the enjoyable beat of the track and the refreshing balance of electronic sounds used.

The members are also able to flaunt their vocal skills here as they play with the beat while singing. With their voices, they emphasise the fun push-pull rhythm of the song, more fully expressing its lyrics, which convey a light frustration and an anxiousness for a lover to give a response (presumably to a confession made), nicely portraying the uncertainties that come with young love at times:

In general, the members displayed great vocals through the album, but the standouts are definitely Hyesung and Sohee. While it is unfortunate that we did not get to hear more of the other members (the line distribution for this album was pretty skewed, especially toward Sohee), Hyesung and Sohee have very pretty and strong voices, and embellish the album with their impressive adlibs.  Hyesung stood out especially in “Summer Dream”
as she sang in a bouncy manner, contributing to the refreshing and fun feel of the song. 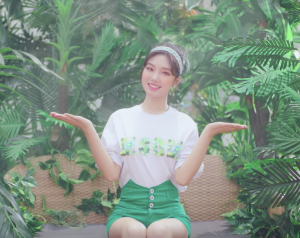 The main rapper of the group, Bella, shined through most of her raps in this album, with the exception of “Summer Dream”, where her rap felt a little like lazy talking. It might have been intentional to contrast with the high energy of the rest of the song, but it felt as though it did not belong there, and this affected my enjoyment of the song. Though they were not as frequent, Bella impressed with her vocal parts as well, as she has a deeper voice which balances with the higher tones of the other members.

While the songs are catchy and the instrumentation is quite fresh, the album feels somewhat surface-level, as both the group and the music producers are not delving deeper either thematically or musically. Then again, this could have been the intention from the start–to create a fun album for the summer. Summer Dream is an enjoyable mini that is full of summer bops, especially the highly energetic “Will Be Mine”. It might not have stood out musically, but it is probably the best song for listeners to dance along to. Thanks to the lack of excessive auto-tune/vocal effects, the clear vocals of the members definitely bring out the light-heartedness of Summer Dream. I will be looking forward to the future releases of Elris; if this album is anything to go by, they may develop into a leading girl group in the future.