“Restless” is a mid-tempo R&B song. Lyrics for “Restless” were written by Loogone, JQ, and Melody Day members Yeoeun, Chahee, and Yoomin. The lyrics, combined with an instrumental that makes good use of a drumset and synths, make “Restless” an incredibly soothing and listenable breakup song that left me pleasantly surprised.

“Restless” follows Yoomin, who comes home after a long day at work. After going through the motions, Yoomin adjusts a virtual reality headset on her head. The dim lighting during this sequence does a good job of highlighting the post-relationship loneliness and melancholy mentioned in the lyrics. The contrasting yellow and blue are a good touch, as well. They show the conflicting emotion Yoomin feels as she misses her lover but simultaneously longs to stop thinking about him.

As Yoomin puts the virtual reality headset on, she finds herself transported to a green, glittering game world. There, a handsome stranger offers her a drink as hearts flutter above their heads, reminiscent of The Sims. 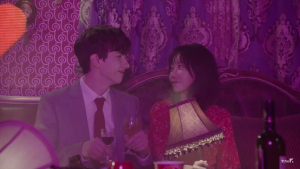 It took me a second viewing of the video to realize that Yoomin transforms into Yeoeun when she puts on the reality headset. Yeoeun, in her pretty dress and perfectly coiffed hair, represents Yoomin’s idealized self.

Yeoeun then transforms into Yein, who is driving a yellow convertible with the man beside her. A clear, blue horizon peppered with shooting stars beckons to them from the end of the clear, countryside road they are driving along. This is a metaphor for the beginning of a relationship. Everything seems to be going smoothly, with clear skies ahead.

Perhaps Yoomin wanted to switch up her look, but my guess is that Yoomin as Yeoeun falls in love with the man too quickly. Yoomin wants an avatar who is somewhat indifferent, and thus, she chooses Yein.

The video makes use lots of similar metaphors to slowly build up tension between the couple. A sign reading “To me, you are perfect,” ensconced in rocky plateaus, is an entendre for a rough relationship. A heart-shaped balloon floating away shows some of the attraction and love between the couple fading. Yoomin as Yein even gleefully aims a shotgun at her lover, though she just shoots the apple placed on his head.

The couple’s relationship further deteriorates when Yoomin’s avatar transforms from Yein to Chahee . Yoomin likely transforms into Chahee because she wants an indifferent avatar who successfully executes what Yein failed to do — shoot her lover.

As Yoomin logs out of her virtual game, the viewer realizes that Yoomin’s motivation for playing the game was not to find the love she had lost. Rather, Yoomin sets out to exorcise the ghost of her relationship that keeps haunting her. She accomplishes it by playing a virtual reality game where her lover represented her relationship. Rather than pursue a relationship with a virtual lover to make up for the one she has lost, Yoomin kills him and all her lingering regrets about her ex-relationship that he represents.

Melody Day’s “Restless” music video is a fresh take on the trope of moving on after a relationship. Some artists choose to have their memory erased, à la Donghae & Eunhyuk in “Growing Pains”; others promise to bloom brighter like Sunmi in “Gashina”; and some offer their “Congratulations” to their ex like Day6. Melody Day choose to play a virtual reality game where they shoot their lover. Filled with visual metaphors, the video itself is ultimately quite meaningful.