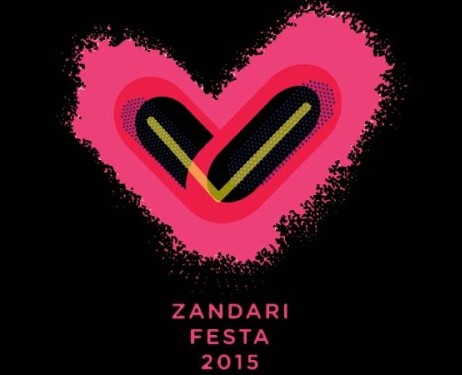 This past weekend 261 artists from around the world and countless music enthusiasts made their way to Hongdae to enjoy the three days of bliss known as the 2015 Zandari Music Festival. With over 23 venues (and an outdoor stage) opening their doors to the event, Zandari Festa is the largest music festival of it’s kind held in South Korea.

Not only does the Festa give music fans a chance to see some of their favorite Hongdae veteran acts like Crying Nut, but it also shines light on up-and-coming artists from around the world. Zandari Festa 2015 also featured a couple SXSW performers we’ve spotlighted here at Seoulbeats, including Asian Chairshot, and Victim Mentality as well as some of our Indie Gems like Peterpan Complex and  Wasted Johnny’s.

So this past weekend, I ventured to Hongdae — the hub of many a forgotten night on my part — for three days to experience the Zandari Festa 2015. Though the festival technically began Friday evening, performances actually began late afternoon Saturday — which gave me a bit of time to enjoy bands like Reflex and Burstered, who were not participating in the actual Festa but were still on the scene over the weekend. 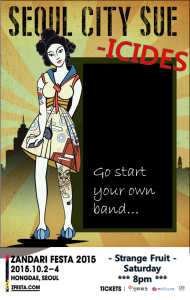 Strange Fruit is a venue located in a basement on the outer end of Hongdae’s main strip. You’ve probably been to house shows in larger spaces than Strange Fruit can offer, but I doubt you’ll find the same atmosphere that the mini venue manages to create. Known more for it’s indie-blues line-ups, Strange Fruit is one of the staples of the Korean underground scene — just down the road from indie launching pad, Club Bbang. As I wandered into the basement venue, I managed to catch the tail end of Sons of Tiger‘s set — and subsequently a very punk take on the Chuck Berry classic, “Johnny B. Goode” — and I was a bit disappointed that I missed most of their set as they looked promising.

The venue cleared out a bit for the following band, Seoul City Suicides: a Garage rock trio who hail from the United Kingdom (but who are active now in Seoul). Given the tiny venue and the small(but relatively enthusiastic audience, experiencing the set felt a bit like witnessing a mid-life crisis play out in a suburban basement. The trio took the floor in a set of loose white button-ups and black slacks with Lead Vocalist Chad Fazenbaker sporting his neck tie around his head and a pair of sunglasses I’m sure he keeps on the side solely for performances.

The band rocked through each of their fast-paced numbers, making the most of the floor space for dancing and some fun trick guitar moves. With catchy guitar riffs and base-lines, the audience bopped along wondering what antics Mr. Fazenbaker would manage to get up to next in the tiny, tiny space. At the end of the day, Seoul City Suicides are a group of friends who very obviously enjoy performing together while exchanging witty banter in between songs. 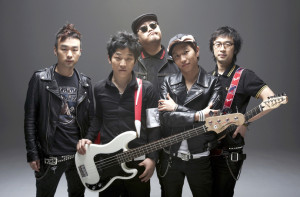 Next up, was infamous Korean punk band Crying Nut, who performed at the swanky AMP Live Club. AMP is also an underground venue, but only in the sense that it is literally two flights of stairs below ground. Other than that, the venue is far more ‘up-scale’ with drink prices to match (even baseball stadiums don’t charge 10,000 won for a single beer!). Along the walls you can find framed black and white pictures of just about every western act to make it big internationally. (Have they actually played the venue? No. But do the photos add to the polished vibe the venue puts forth? Most certainly.)

Crying Nut is undoubtedly one of the most influential bands in the Korean Punk scene, with their beginnings back in 1995 and the days of Joeson Punk.  As such, they’ve acquired quite a following and it’s no surprise the house was packed to watch the five-member group take the stage.

Their set kicked off with the ringing of Kim In-soo‘s accordion, before he switched over to the recorder. From there, heavy guitar and some seriously aggressive drums kicked in and Crying Nut reminded everyone exactly why they are still considered one of the best punk bands on the scene: the audience was screaming along the entire set, already familiar with each and every number the group performed. Since they’ve been at it for so long, they hardly stick to a single genre, but aside from the broad label of “punk,” pirate metal may be the next-best descriptor you’ll find to capture the madness of sounds that make up a contemporary Crying Nut show.

Despite the upscale venue, it was a punk show through and through from the antics of the band members themselves to the participatory enjoyment of the audience. Their forty minute set played host to the most polite mosh-pit I have ever seen in my life (they warned bystanders ahead of time!), Kim In-su sticking a microphone in his mouth while screaming, a shirtless man in a kilt jumping on-stage to sing along with vocalist Park Yoon-sik, and a whole lot of screaming. I can’t help but feel that had Crying Nut been booked in one of the more divey rock venues, like Club FF, things would have gotten even more out of hand (in the best of ways, like they’re known for). My vocal chords may never forgive me, but I had a great time.

Closing out the evening was a trip to Club Freebird (sometimes referred to as Big Bird) which plays host to any and all Hongdae music in it’s Spanish-colonial cave basement. (If you haven’t caught on, nearly all Hongdae venues are located underground). Future Gaze, a new electronic trio from China, were the perfect act to wind the evening down as many artists of the Festa made their way into the venue. Vocalist Sharon Q instantly had the attention of the audience with her expressive dance moves and belted moans into the microphone. Free Bird is a venue that is all about ambiance, and electronic house music suited the space very well. The electronic jams were hypnotic but emotionally charged, and it was a shame the set was cut short due to technical difficulties. 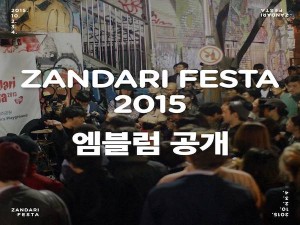 Sunday was the third, and final day of the festival, but none of the bands seemed like they were winding down at all. First up, I caught up with Japanese Los Angeles, whose synthesizer player Andrew Hintzen we interviewed before the festival.

The humble four-piece jazz-electronic group from Michigan began their Gogos 2 set with a couple covers, including Cruiser, before they infused their set with partly written, partly improvised original material. It was a treat to watch the four members perform, as the keyboard, drums, snyth and even saxophone played off one another to create an electronic 80’s sound that transported me back to my arcade Tron playing days. Japanese Los Angeles make the perfect kind of music that I would marathon play Tetris to — and I mean that as the highest compliment, I love Tetris. On top of the music, they’re also really nice guys who made a solid effort to connect with the audience, even with a language barrier. 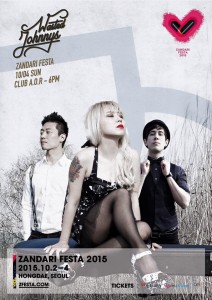 I also managed to catch one of our Indie Gems, Wasted Johnny’s who took the stage at Vampire AOR later that same evening. Taking an almost 180 degree turn from the smooth set of Japanese Los Angeles, Wasted Johnny’s hit the ground running and didn’t stop rocking all the way through the encore — with the exception of minor technical difficulties.

Though they’re listed as a blues rock group, Wasted Johnny’s took the stage with all the attitude and swearing of a grunge-rock group. Vocalist and lead guitar player Angie had the audience in her clutches before the set even officially began and her devil-may-care attitude brought all the right vibes to the small (surprise: underground) venue; bassist Nils and drummer YJ also performed with such charisma that it was impossible to not be sucked into the performance. It’s no wonder the group leans heavily toward live performances, as it’s obvious how much they enjoy being on stage.

As readers may know, we here at Seoulbeats are pretty big fans of the 80’s rock throwback band, Victim Mentality. Maybe it’s the hair, maybe it’s the impressively tight pants, or maybe it’s the good ol’ rock n’ roll, either way, they’ve got us hooked. It was only appropriate to end a great Festa experience with one of the most entertaining bands on the scene back at AMP. Opening with “The Final Countdown” followed by a Scorpions cover, Victim Mentality kicked things off right for the mix of local and international fans in the audience. 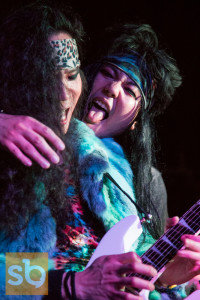 There’s a lot that could be said about the wild and crazy band, but I’ll let their self description do the work for me:

Victim Mentality is a blitzkreig heavy metal band whose songs will help rid you that victimized feeling from deep inside and enable you to become more free and have more fun.

Fun is the name of the game at a Victim Mentality show, and everything about the way they took the stage to the way they chatted with audience promoted a fun atmosphere, with a hint of recklessness to rid the audience of the woes of returning to work the following morning. Not to mention, each member was sporting some ridiculously fabulous tights and impressively teased hair. I couldn’t think of a better way to end a weekend of fun than to watch Victim Mentality transport me back to a decade I never got to experience first-hand.

With so many acts (261!) packed into two evenings of performances, it’s really a shame that fest-goers have to narrow down their list of shows to a select few. Another downside is that Hongdae venues stretch over a pretty extensive area to travel by foot, and with back-to-back shows, I spent a lot of time running around the neighborhood. With the distance between venues and their tendency to be hidden underground, I can’t imagine navigating the Zandari Festa would be an easy task for someone unfamiliar with the area — even with an event map.

Zandari Festa 2015 offered a bit of everything, from solo acoustic to full-on hair metal and anything between. Most of the 23 participating venues offer similar line-ups every week, but the real treat of the Zandari Festa is that with a single wrist band you can wander from venue to venue and experience the most of what the Hongdae music scene has to offer — without multiple cover charges — in a single weekend.

Personally, I can’t wait to check out some of the bands I missed at next year’s Zandari Festa, if not sooner!

Readers, were any of you at the Zandari Festa this year? What acts would you like to see more of?