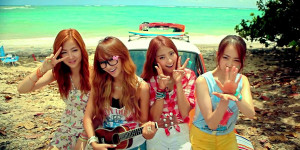 Summer is over in Korea. In the past years, we have concentrated on what releases were a highlight of that summer (2015), beloved summer releases (2016), and our favorite summer music video trope (2017). A common thread in these is the strong presence of Sistar, the iconic queens of the summer. As Lorenza said in our 2017 Summer Wrap Up, summer just won’t be the same without Sistar. With this in mind, we ask our writers: which groups impressed this summer? Additionally, which groups or solo acts are poised to take over the summer crown and reign supreme?

Janine: It’s been a cruel summer without Sistar. Don’t get me wrong, I’ve enjoyed a number of summer releases. Twice’s “Dance the Night Away” was a pleasant earworm, GI-dle captured my attention with “HANN(Alone)“, and Imfact gave me house party flashbacks with “NaNaNa” but there wasn’t one group who seemed to embody the same spirit of irrepressible, light-hearted sexiness. Hyolyn’s solo releases “Bae” and “See Sea” came close in sound but neither stuck with me in the same way as a Sistar release. Things felt a little heavier this summer, musically. Most of the songs in my playlist have been more sultry than effervescent.

I found myself listening to moodier cuts of Shinee’s Story of Light series that felt more appropriate for driving along the streets at night trying to escape the heat than having a pool party. Another repeat play was SF9’s “Now or Never” that didn’t so much make me want to shake my booty as ignore the crowd at a rooftop party to brood over frozen vodka cocktails. This is might be due to my own state of mind but summer didn’t feel as fun this year.

I don’t necessarily think this is a bad thing. Sistar has made an indelible impact on the k-pop landscape and trying to replicate their unique hold over the months of June, July, and August may be a fool’s errand. Maybe Sistar will be a historical musical marker for when summer felt effortless and irresistible. We used to have unshakeable queens of summer, now things are a little more anarchic.

Pat: Like Janine, G-Idle also captured my attention with “HANN (Alone).” While I wasn’t that into the fun but somewhat derivative (to me!) “Latata,” “HANN (Alone)” was on repeat for most of the summer. Aside from this, I loved Taeyeon‘s “Something New,” a song that still is a regular on my playlist. Unfortunately, it wasn’t promoted so who knows how the more general public would have reacted to it. I’d also like to add in Loona‘s “favOriTe” to the mix for its sassy vibe and Triple H‘s “Retro Future” for being grown-up fun.

What was interesting for me was trying to find a song to latch on to and love. SM Entertainment was really trying to make Red Velvet happen with “Power Up” as a follow up to “Red Flavor.” While it can be easily argued that “Power Up” was anything but a power up in terms of music, it can’t be denied that “Power Up” did incredibly well in South Korea in terms of sales and streaming, with the group winning multiple times on the weekly award shows. Listenability is another question.

Another strong competitor is Black Pink. Last year, they only had one release with “As If Your Last” and this year, “Ddu-Du Ddu-du” was also a massive hit. It’s a love it or hate it type of song, or a ‘somehow-find-it-stuck-in-your-head-when-you’re-trying-to-sleep-because-you-watched-PD48-before-you-went-to-bed-and-now-you-love-the-damned-song’ kind of thing. Yeah. True story. Send help.

It’ll be interesting to see what happens next summer. So far, it seems that the girl groups from the Big Three have had their own time in the spotlight this summer. But Sistar didn’t come from a huge company, if anything, they built Starship Entertainment. For now, we’ll have to watch the companies try to take their spot. Or perhaps, next summer will be like this summer, where there is no clear dominant summer hit with an undeniable impact to the Korean general public and the K-pop listening audience, but rather a series of releases that reign supreme on the charts for two or three weeks before bowing out to the next group.

Vivien: Seconding GI-dle‘s “HANN (Alone)” and Taeyeon‘s”Something New”! Both are really interesting and unusual songs that I think will survive the test of time (i.e. I won’t forget about them after a few months) and G-Idle is fast becoming my favorite rookie of the year. BTS and Blackpink put out club bangers with “Idol” and “Ddu-Du Ddu-Du” respectively and no doubt they will go down in K-pop history, but when it comes to summer I personally think of the poolside — for me, Seventeen‘s “Oh My!” fits this vibe the best. The MV was deceptively un-summery but “Oh My!” is really a summer song through and through; Seventeen continue to impress me with excellent pop and this is personally one of my favorite title tracks this summer.

As for who’ll succeed Sistar as reigning Queens of Summer, I think it’s pretty obvious Red Velvet are Korea’s choice at the moment. I was in Seoul recently and while I thought “Power Up” was okay when it first released, I was pleasantly surprised to find it really came into its own when played on tinny speakers on bustling Korean streets everywhere on a sunny afternoon. Twice‘s “Dance The Night Away” was a good attempt, but I think Red Velvet’s pop plus quirkiness formula wins for now. If they continue their streak of fun and catchy pop songs I don’t doubt they’ll quickly replace Sistar as Korea’s choice of summer girl group.

Celina: Thirding GI-dle and Taeyeon, and seconding Loona‘s “favOrite.” Loona, in particular, had a seemingly boring gray-heavy MV but managed to liven it up with their amazing dance performance and brassy song. I really didn’t pay much attention to them before, but that song really got me interested.

I’m not the biggest Red Velvet or Twice fan, and I didn’t like either of their summer songs. With that said, I also wasn’t the biggest Sistar fan but I’m really enjoying all of the songs Hyolyn has been putting out. So far, I’ve like her better as a soloist and I absolutely loved “See Sea.” The chorus is sultry and understated, and her dancing in the MV is sexy and unique. I also liked “Bae” and it’s cute retro-style MV.

I absolutely love Seungri‘s “1,2,3” which is an amazing pop-rock song with an equally vibrant MV. If I had to choose one song for the summer, it would be his. I loved that he stepped outside the Big Bang concept and really showed us his talent and individuality.

As to who will take over summer, even though I’m not their biggest fan, I can’t deny the popularity of Twice and Red Velvet. I can definitely see them competing in the years to come for the summer queen title. I don’t know if any one group can ever replace Sistar.

Qing: I’m surprised, and frankly disappointed, that we didn’t get an indisputable summer anthem this year. K-pop has been making forays into many trendy genres, but summer is usually the one season I can count on the scene returning to its niche of, well, pop. I was really hoping for at least one insanely addictive earworm. As trends will have it, though, many groups put out title tracks with more laid-back vibes. But even though we didn’t have a “Very Nice” or a “Red Flavour”, I did find myself adding two songs by rookie boy groups to my K-pop summer rotation.

ONF‘s “Complete” is on the pulse of the EDM and tropical trends, but it’s so well-executed that it sounds fresh instead of cliched. The brassy post-chorus instrumental gives it a surprise edge, and the energy of the song never flags. Also from the class of 2017 is Golden Child. Their mid-summer release, “Let Me”, is sunny and buoyant with its pure pop sound, one that is ironically hard to find in K-pop summer releases of late. “Let Me” makes me miss the days K-pop songs actually had a melody you could belt your lungs out to.

What about you, readers? What did you think of the Summer of 2018? Do you have any stand-outs? Let us know in the comments below! 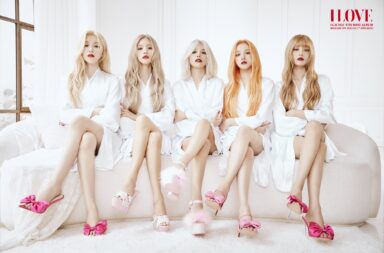