These days you’re more likely to see the aeygo concept dominated by female K-pop groups like Twice and Elris. In contrast, most male groups tend to go for a hip-hop or rocker look. Last year, Golden Child disrupted the K-pop scene by sporting adorable uniforms and short shorts for their debut MV titled, “DamDaDi.” Since then, they’ve been nominated for various awards, including the Mnet Asian Music Awards and Seoul Music Awards.

Golden Child is definitely different than Woollim Entertainment‘s senior group, Infinite. Infinite has experimented with various genres like electropop and orchestral backgrounds while Golden Child has mainly played it safe with pop-bop tracks. While Golden Child’s concept is uncommon, it is unclear if it will be enough to help them get ahead in the K-pop scene. Earlier this year, Golden Child did try a more mature image for “Lady,” which shows they are not stuck on their aeygo look as a gimmick. However, perhaps to fit with a cheerful summer theme, they have returned to a cute image for their latest comeback. Although this look and type of music is typically not my cup of tea, there is no denying the charm and liveliness of these songs.

The album, Goldenness, and the MV to their title track both dropped on July 4th. “Let Me” is the first song on the album and it is a pop-rock track that is here to be your guilty pleasure. The cheerleader-like chorus will guarantee to pump you up for this summer’s outings at the beach or before a morning work-out. “Let Me” is different compared to other current summer beats and bears more similarities to the now disbanded UK group’s, One Direction, signature music style.

Unfortunately, the MV suffers from a weak theme and plot. In the beginning, a female character is standing unamused as the members are taking turns in attempting to impress her by doing various silly tricks. This ties into the song itself, concerned with making a big declaration about being willing do anything for your love interest:

Tell me yes
If you like it
I’ll run.
Tell me yes
Ready.
I’ll do it for you.

Going forward in the MV, the boys shift to playing games like table football and a human version of whack-a-mole. The members are generally goofing around for the rest of the MV, and it never circles back to the love interest. While the theme of competition makes sense with regards to the lyrics, it would had been more relevant if they were to stick to impressing the girl. 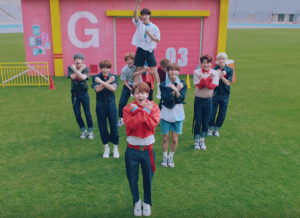 The dancing is full of expressive arm and hand movements, hopping and bopping, coupled with enthusiastic and bubbly facial features. It is not a rigid and convoluted dance routine and, at times, the MV focuses on the boys naturally moving to the music on their own. The routine is also similar to a cheer team at sports events, tying in well with their game concept.

The colors of the MV switches back and forth from bold pinks and yellows to soft browns and blues. This creates a lively color scheme without being overwhelmingly vibrant like most summer MVs. The MV does also contain several typical summer images like scenes on a fake beach and a bright green sports field. Overall, the MV conveyed a free-spirited vibe to match its gleeful melody.

The second track on Goldenness, “IF,” is another joyful pop song with a slight hip-hop edge. The lyrics are about presenting a what-if scenario to their love interest to encourage them to pursue a relationship with the speaker. The song is full of hope and excitement, fitting into the album’s youthful theme. With both this song and “Let Me,” the rappers of the group shine through with their personality and enthusiasm when delivering their lines. In “IF,” Jang-jun’s lyrics in particular are charmingly quirky:

If our love was like in books
I will chase you out of the books,
the background will be a documentary

For the final track of the album, the boys show off their vocals and get a little bit more serious with this romantic breakup ballad titled, “Thank You.” The lyrics are somber as they sing about a relationship that has ended. However, the persona of the song is letting their formal lover know he is still thankful for the moments they had. Given the boys’ younger ages, “Thank You” is a mature take on the end of a relationship. Yet, the song is not overly depressing as it maintains a positive outlook. The ballad’s chorus, sung by the members as a unit, shows the group’s strength in vocal harmonies. 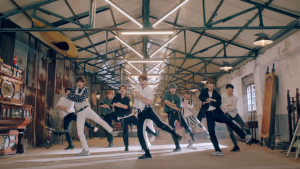 Overall, the album is consistent with summer bops about the enthusiasms and heartache of first loves. Love in music is a fairly generic topic but the boys manage to tackle it from different angles without sounding boring.

While other artists experiment with various genres and darker themes, Golden Child is sticking with cheerful pop songs together with a youthful concept. The songs on the album all have memorable choruses and are perfect for the summertime. As time passes, we shall see if Golden Child can grow with their music as they age out of the aeygo concept.