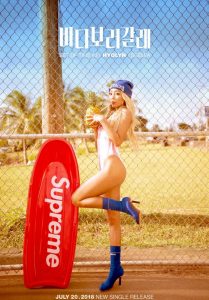 Since powerhouse girl group Sistar disbandment, each member has diligently carved out their own path for a solo career. So far, member Soyou has enjoyed her limelight with her piano and ballad releases while members Bora and Dasom have focused their attention on acting for various dramas and movies. Hyolyn (Hyorin), however, has definitely come to receive a surprising amount of attention thanks to her bold releases accompanied by over the top seductive and sexy choreography. Her last comeback “Dally”, featuring rapper Gray became an instant hit thanks to its trap beats and its bold dance break that could make anyone’s jaw drop.

Now, after a three month promotion period for “Dally”, Hyolyn seems to be on a roll continuing with the release of her third and final single from her upcoming project Step Up Time. Hyolyn’s latest comeback titled “See Sea” is just right for the mid-summer weather vibe that continues to increase in temperature. And just like the scorching weather, Hyolyn seems to hold no barriers as she goes for full-on sexiness that surpasses even the hottest moments of “Dally.”

The MV for “See Sea” begins with Hyolyn in a summer coastal setting, with several dancers behind her who act as her tight-knit group of friends, and they enjoy the fruitfulness of summer together. Hyolyn is impressive as she is seen rocking almost every type of swimwear, with her brightly tanned skin, that only emphasizes the sexiness of the song and music video. The song is influenced by a mixture of EDM and tropical house that lends the track a catchy beat, and it is almost guaranteed to be instantly memorable to listeners.

The color palette of the video’s cinematography must also be praised–it plays with the bright neon colors of Hyolyn’s swimwear, which is placed against the backdrop of the beautiful natural colors of the bright yellow sun, and the clear blue sea and sky. The color of Hyolyn’s newly dyed beach blond hair is also a pleasant addition. It heightens her dominant presence throughout the music video, while still fitting in naturally with the rest of the cinematography’s palette. 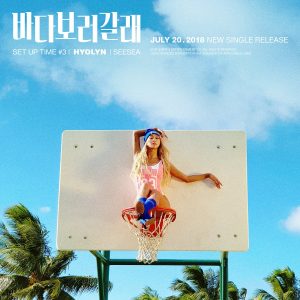 When the first teaser pictures of “See Sea” first dropped, there seemed to be some pushback from netizens who felt that Hyolyn was selling herself short performing in a more provocative manner, rather than using her talent as a top vocalist to further her career. However, this long-revived argument holds no real substance, especially when concerning Hyolyn, because she has always been a great vocalist no matter the genre of song or differing concept. With “See Sea”, Hyolyn’s dynamic vocal range can still be heard as she constantly transitions to a higher key range flawlessly, showing that she has never sacrificed her vocal talent for the sake of popularity or mass acceptance.

In such an important moment in Hyolyn’s career, one cannot help but to see just how much Hyolyn enjoys performing with such sexy and strong concepts. Since leaving Starship Entertainment, she has really come into her own and has tried to venture out further in order to expand her boundaries as a solo artist. Even the lyrics of “See Sea” indicate that she won’t be swayed so easily anymore by things that bring instant comfort:

I’m not easy, I don’t trust men
But maybe your the exception, you make my heart open
Maybe today is the day, let’s check our feelings
Maybe tonight may be the night 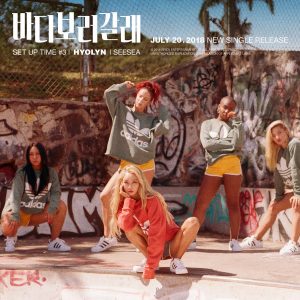 Hyolyn can see a quick opportunity for a true connection, but warns that she is not someone easy to play with. Still, with all this in mind, she fears no challenges, and decides to take a risk in hopes that it could lead to something real. This narrative of the lyrics is a parallel to the way Hyolyn’s career seems to be heading. As an artist, she is taking many risks with many paying off. The backlash with her continuing to do what she appears to be comfortable with is only a slight burn to her artistry, and it can even fuel her further.

“See Sea” is a fantastic addition to Hyolyn’s discography, and can indicate a pivotal turn in her career if she can keep her strong momentum rising. The bottom line is that she will continue to do what she wants, whether that be a concept based on provocativeness or sultry dancing. And for that, she needs no approval.