Red Velvet's "Power Up" is a Lot of Copy + Paste 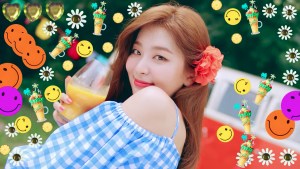 After 2017’s “Red Flavor” became an anthem of summer, it only made sense that Red Velvet would return this year with another seasonal earworm in the form of “Power Up.” After two comebacks that showcased the more velvety side of their musicality, “Power Up” gives the red side a chance in the sunlight. Unfortunately, it’s too much of a rehash of what has worked and fails to bring anything new to the table.

In concept, everything about “Power Up” is opportune for this moment in summer. It’s a song about finding energy in sweltering heat, about powering through summer doldrums. It also embraces the YOLO concept that is popular right now with South Korean 20-somethings in the form of escapism. South Korea — as well as the rest of the world — experiencing record high temperatures this summer, “Power Up” offers the chance for a reprieve.

Oh, I haven’t done anything but how is already 3 o’clock?
I’m drinking iced americano but why am I still so hot?

The sun is teasing us, the asphalt is 50 degrees
I want some energy, cold or hot

The cultural moment is reflected in the opening scenes of the MV with the set melting around the Red Velvet members as they go about mundane daily activities indoors like ironing, or eating breakfast. It’s only once the members break free of the monotony of domesticity that they find enjoyment and energy in their creativity. With the first chorus and chants of “let’s power up!” the members come to life, converting Wham! records into kiwis, and pineapples into plant holders, all the while fantasizing about a real escape, which they are eventually granted in the form of a back-yard juice party.

Go, go, airplane, fly like lightning
So I can throw myself into the Kauai waves
Yea yea yea
Let’s power up, we’re gonna burn up 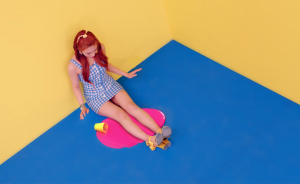 Blocks of bright colors contrasted with the patterns of the member’s outfits create a somewhat overwhelming, but appropriately bold aesthetic that is right in line with the red side of Red Velvet. When the members run away to the outdoors through a gigantic retro television, the blue gingham patterns invoke summer picnic vibes, while tiny fruits and jewels decorate the frame. There’s not much rhyme or reason to the second half of the MV, but there certainly are aesthetics that help to draw out Red Velvet’s color.

While it all looks good, the first couple viewings of the MV left me feeling like I’d seen all of this before. That’s because the MV for “Power Up” is full of nods to Red Velvet’s past red concepts. There’s the assembly line of “Dumb Dumb“; the member-fruit pairings and embellishments of “Red Flavor“; the benevolent puppet master of “Rookie“; and the cut-out patterns of “Russian Roulette.” Even the block colors are a reference back to the hair colors of “Happiness” that were meant to distinguish each member, plus some purple for Yeri. These little Easter eggs may have been intended to give fans something fun to notice, but the attempt to include so many past aesthetic markers meant the MV abandoned its concept early on in favor of re-hashing what has already be done. 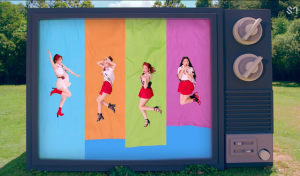 The track suffers from the same fate as the MV by trying to nod too much to what has worked before, but not being able to piece it all together. I fully get what SM was going for here: an 8-bit sound reminiscent of retro video games (and “Russian Roulette”), with the chorus speeding up the same way the soundtrack to Super Mario does when players unlock a bonus level and need to eat as many 1up mushrooms as possible. Conceptually, it’s a sound idea that fits the concept in a unique way. However, after such a strong intro, the chant-style chorus comes out of nowhere, with only the consistency of the 707 drum linking it to the verses that support it.

No matter how enthusiastic and motivational the chorus is, it feels out of place. It’s almost as if  SM set out for “Power Up” to be “Red Flavor” 2.0, but was missing a chorus, so they pulled something from the discarded Pink Tape f(x) box, added a little banana flavor in the form of a hook, and stitched it altogether expecting listeners to be none the wiser. Unfortunately, SM left the seams too visible in “Power Up”; the chorus throws so much of the track off course, that even the lyrics after the first verse are nothing but nonsense. 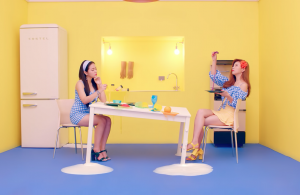 I’m going to take a gamble here and speculate that there were some last-minute changes made to the track and concept — as well as a pushed up comeback date — in order to make “Power Up” an iconic anthem of the hottest summer on record. SM saw the moment, and they jumped on it. In so doing, they pulled too much from the past in order to fill the gaps left in the present. That’s the only explanation I have for why the track goes from an ode to beating the heat in the first verse, to a vaguely romantic song in the second, and airplanes and fruit all ended up blended together much like the juice beverage in the MV.

In the end, “Power Up” is a lot of poorly used copy + paste. There’s too much going on that cohesion is lacking both in concept and sound. It’s clear where SM started with “Power Up,” which makes it all the more disappointing that neither the MV nor the track could bring much new to the table.