Stray Kids Mark Their Own Lane in “My Pace” 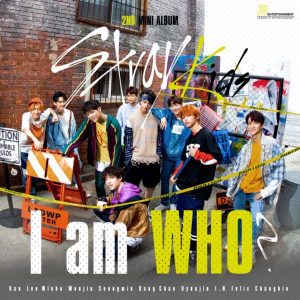 Stray Kids exploded onto the K-pop scene in 2017 via the proven hype machine that is the idol survival show. Although JYP Entertainment kept tensions high by booting two members from the band, only to later reinstate them, the concept focused on the boys proving their mettle as a unit rather than as individuals. This provided the perfect platform to test out Stray Kids’ musical styling, and the talent of the trio 3RACHA, comprising members Bang Chan, Changbin, and Han, who have stacked up writing and producing credits for the majority of Stray Kids’ material. Be it a mark of their survival show origins, or the authenticity of self-produced music, Stray Kids have come to own their hard-edged but ultimately uplifting sound.

“My Pace” is the title track taken from their second mini-album I Am Who, and it slots in line with the lyrical progression of Stray Kids’ releases. Beginning with the pre-debut EP Mixtape, Stray Kids have been honing an image that walks the line between in-your-face bravado – the title of “Grrr” says it all – and the more poignant lyricism of “Mirror” to create songs that draw on the harsh reality of the idol industry, as much as they chime with the everyday struggles of the group’s adolescent fanbase.

Stray Kids’ latest title track “District 9” defined this sound with its use of dystopic symbolism; the MV combines a prison-like setting with school buses in an echo of BTS’ “NO.” However, “My Pace” switches tempo, trading uniforms for mismatched athleisure styling, and the sombre lighting for an over-saturated, high-octane video. The result is an MV that combines its smart lyrical message of prioritising individuality with the kind of blistering energy only Stray Kids can deliver.

The MV for “My Pace” is an interesting contrast to the canon of K-pop videos which often pair themes of overcoming adversity and striving for success with dark visuals.  Stray Kids’ debut, “Hellevator,” was the perfect example of idols utilising the narrative of their own struggles to reinforce a hop-hop influenced sound. B.A.P, Seventeen, and Monsta X have all been there before. But in “My Pace,” Stray Kids match this rawness with a vibrant visual palette that showcases the concept in a fresh light.

“My Pace” opens in monochrome, the camera framing each member’s face as they gaze ahead towards some unknown goal; they are focused, preparing to act. The clips glitch in and out of view, sometimes blurring, at others tinted green to mimic a security-camera footage. It is a cool idea — adding an edge to each shot — tying in to the concept of the Stray Kids; they are the ones on the edge, ready to run. 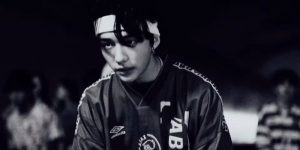 And run they do, when the scenes flicker back into life and the music kicks in. The camera dips and dives between the members and their army of extras, running down race tracks and swarming a car park on rollerblades and motorbikes. Changbin, chilling in a slick red sports car, clears his throat before launching into a hook that sits somewhere between taunt and victory cry. The boys take point, cutting razor-sharp formations through the chaos, jumping and kicking their way through the dynamic choreography. “My Pace” is a performance MV at its core, but rather than merely showing the group dancing around an array of sets, we get the car park, cool scaffolding, and an artfully arranged heap of tyres to name a few. The MV ups the ante by layering and splicing shots to create a daring cartoon-strip effect.

As Han, Hyunjin, and Changbin spit their verses, the MV sets them against one another in vertical frames, occasionally layering Felix over the top in a bubble of graphic static to throw in an ad-lib. Alongside these close-ups of whoever is holding the proverbial mic, we see the full group performing the choreography at double speed or stop-start slow-motion to sync in with each rapper’s flow. The effect is a brilliantly assembled puzzle of energy and movement. The visuals tumble into frame one after another, continually building energy to match the power of Stray Kids’ performance. The strength of the imagery is matched by the track’s lyrical angle. Han begins the first verse comically side-eyeing the abs of the extras around him:

But the chorus inverts this negative comparison to turn “My Pace” into an anthem of finding strength in one’s own potential:

No need to rush, my pace
Don’t compare
It’s alright to go slowly
Go on your own path, my lane
Put down your impatience
Just keep looking forward 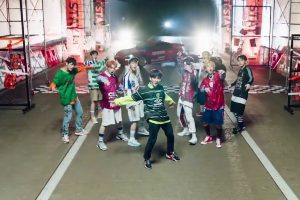 The song is an interesting opposition to the K-pop bent on ceaseless self-betterment and running for greater success. Stray Kids prioritise their individual goals over what others might be achieving, and understand the reality of the time and commitment it takes to fully find one’s path. It is a mature theme unexpected of a group barely beyond rookie-dom. Yet, with a survival show and three EPs under their belt, Stray Kids are already veterans of their craft.

This prowess is demonstrated in the structure of “My Pace,” co-written and produced by 3RACHA, J.Y. Park, Earattack,and Larmook. The song is built around a core grungy guitar riff that plays against the vocal anthem of that “nanana” earworm. It utilises the layered percussive touches of hand claps and stilted beats to back the punch the team’s rappers pack in their verses. This energy is tempered with the smooth vocals of I.N., Seungmin, and Lee Know who trade lines in the pre-chorus over a bubbly crescendo of synths. But it’s when the chorus melds both sides of Stray Kids’ skill sets that the wave of energy peaks and brings the track home in a perfectly balanced salvo of punk bravado, proving that this gang of misfits pull off their best work together.

There’s a great moment just before the bridge flows into the final chorus. Everything slows down as Felix and Woojin deliver their lines, framed in that same flickering green light seen at the start of the MV. We are jolted back to the beginning as the camera zooms in on the boys facing down the starting line of a race track. The only difference is that they are in colour this time. As the chorus hits, the scenes tumble past one after another. 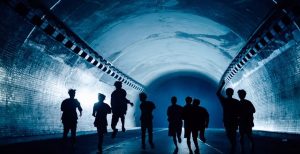 The final choreography scene is showcased via a myriad different angles and sets, interspersed with static flickers and strobe lighting. It ids jarring in the best way, backed by the final variant of the chorus powered-up with reverb and a pulsing bass line to create a chaotic explosion of energy. The kids fly past the camera, disappearing into the distance.

If this is their pace, it’s breakneck, brilliant, and destined to lead them straight over the finish line and beyond. This is a song – and MV – that fine tunes Stray Kids’ mix of bravado and lyrical earnestness into one take. It raises the bar for the cohesiveness of its concept, for the verve in the way they pull it off. Most of all, for it is sheer spectacle. These kids are rebels with a cause, and I can’t wait to see what they take on next.