iKon's "Goodbye Road" is Paved with Tried and True Tropes 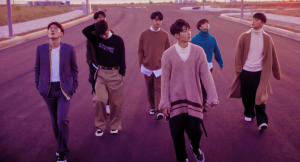 When iKon began their New Kids journey in 2017 with Begin, I was both excited and scared. Excited because iKon would finally be showing a “new” side of themselves after what had been a year long hiatus, and scared because New Kids would likely meet the same fate as Winner‘s Exit movement and end before it even began. My excitement evaporated the moment I heard “Bling Bling” and “Birthday,” which were loud but not the “new” side of them I’d been expecting, and my fear exacerbated when iKon “Return“-ed a year later with no mentions of New Kids in sight.

iKon’s continuation of the New Kids concept with Continue was enthralling, despite being a little unrefined. But their final installment, New Kids: The Final, and its accompanying MV, “Goodbye Road,” is decidedly unexciting and the farthest thing from new.

“Goodbye Road” begins with Chan saying farewell to his lover over an acoustic guitar, and then transitions to a group shot of iKon. iKon begin dancing as the melody switches to a slightly more upbeat tempo—their location flashes back and forth between a deserted shipping dock and a parking lot surrounded by skyscrapers. 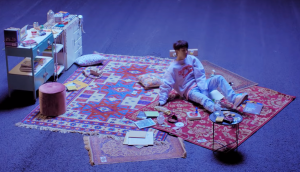 The MV flashes between these group dancing shots and solo shots that follow each iKon member as they struggle to work through the grief after a breakup. Bobby is the first member to break things off with his girlfriend, following a strained, silent meeting that ends with both of them walking off in different directions. Bobby is followed by Jay, Song, and B.I, all of whom are moping and mourning the loss of their love in either: apartments and rooftops backlit by views of skyscrapers or roads backlit by projector screens, a photo booth, or, of course, streetlights.

June decides to take a different path by reminiscing about the good times he spent with his lover as he walks at a distance behind her, unable to bridge the gap between them. No matter where the iKon members and their girlfriends are during the MV, they are always alone—a clear visualization of how alone they feel post-breakup.

“Goodbye Road” is bathed in hues of blues and greens—colours associated with sadness—to highlight the grief iKon feel as they recover from this loss. iKon also wear sweaters throughout the MV to evoke the season of autumn, often associated with comfort, changes and letting things go. iKon are clearly going through changes as they let a loved one go, and are in need of warmth and comfort that a sweater represents.

“Goodbye Road” loops back to Chan sitting along on a sofa repeating the same words he recited at the beginning of the MV and ends with all seven members of iKon walking down an otherwise empty road as the sun sets behind them. This shot is a visual metaphor for, well, “Goodbye Road,” as well as the end of their New Kids journey.

“Goodbye Road” is admittedly a visually pleasing MV at first view. The member’s solo shots are gorgeous, the MV is well-edited, and it follows a consistent, cohesive narrative swathed in cool colours. By the second view, however, it dawns on the viewer that though “Goodbye Road” is beautiful MV, it is also… boring.

“Goodbye Road” follows the formula of break-up K-pop MVs to a tee, with its cool palette, solo shots of members staring off despairingly in deserted settings, and an ending shot of all the members walking or standing in the same place together. The only elements absent from this MV are shots of iKon getting soaked in the rain, throwing or breaking things, or getting into a fight with their lover—though the latter did occur in their “Apology” MV.

Like much of the rest of their New Kids series, iKon unfortunately bring nothing new to the table in “Goodbye Road.” It is a fabulously shot but ultimately formulaic MV that does nothing to illustrate iKon’s growth as artists. Perhaps it is time iKon say goodbye to tried and true tropes, and hello to something truly new.