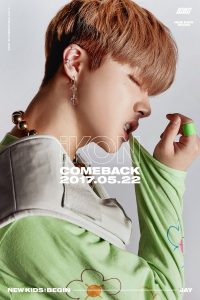 After what feels like an eternity, rookie boy group iKon finally emerges to grace K-pop with a comeback. The concept of iKon’s comeback is admittedly a ‘new beginning’ and a ‘new style’. First up to the bat is their album New Kids : Begin with two title tracks, “Bling Bling” and “B-Day”. Both of them are party songs but each has its own distinct style when it comes to sound and visuals.

The first difference between the two songs is the beat and sound; while both are upbeat, each one reaches its goal in a different way. “Bling Bling”  starts off with what is the baseline for the song — an upbeat tone that is likely the doing of a saxophone. The sax fades out during the individual rap verses and quietly comes back in the pre-chorus. It makes for a very catchy entrance and does a great job of hooking the listener with a few notes while bringing it back at key moments just when you might think the song gets too comfortable.

Going with the flow of the beat, the rhythm of the lyrics further complements the restrained sound of the song. The pacing of the rap verses in the song are more laid back — there is nothing frantic about the song, save for the build-up to the chorus where there is a clapping sound effect that eases into the saxophone baseline. The chorus is where we hear the title of the song repeated throughout in several different tones and timbres. iKON’s vocals are mostly on the brassy side save for the occasional member who has a slight bit of autotune to coat his voice to provide some texture in different tones. All in all, this song stays consistent and predictable through its play.

On the other hand, “B-Day” sets the ground for its energetic sound by layering different music techniques that complements the lyrics. The song starts the song with suspended silence before it dives into the beat with what sounds like an electric guitar.  By taking a slower approach, it builds anticipation to its main background beat with a similar clapping sound effect that was present in “Bling Bling”. Once it settles into the song, the pace picks up and stays consistent, save for the chorus build-up where the song becomes more punctuated with different instruments and sound effects. The build-up is also assisted with vocal wordplay with “B to the birthday” tying into the song title.

“B-Day” keeps the energy going by taking it a step further and  building momentum by using changing tempos through the song. This song has the space to feature certain members singing in between the rap verses which creates an interwoven exchange and makes for a much more dynamic and layered song. Unlike “Bling Bling”, “B-Day” does not open the song with its chorus but rather a rap segment with a erratic quality that has become Bobby‘s signature. Following up with singing and the chorus build-up, the repeating element here is not the title but rather the word ‘waeng’. It’s almost as if that’s the buzzword in the song as it makes the chorus memorable.

While both songs have a similar energetic vibe to them, having  subtle differences in arrangement is one of the elements that makes each song unique.  “Bling Bling” has a much more relaxed vibe because of the smooth sax instrumentation and lyrics that match its tone. “B-Day” is all about the energy as it’s punctuated with upbeat vocalization in tandem with dynamic instrumentation. Both songs use different repeating elements in their songs that makes each one its own.

Another difference between the videos is the visuals presented — YG is known for the over-the-top approach when it comes to style and visual effects and, in both videos, it shows itself in obvious and not so obvious ways. 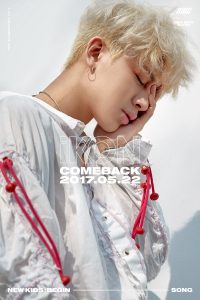 “Bling Bling” uses several different visual tactics to convey its theme of self-aggrandizing cool kids who’ve made it big. The song starts off with the group fully covered, wearing baggy street clothes and in the shadows. Throughout the video, all the dance segments cut back to the group dressed in black and white but interestingly enough, with very little bling incorporated in their outfits. But when they aren’t dancing, they are dressed in YG’s traditional getup of random patterns and odd colourful choices. This MV showcases iKon’s fluid dance style that is in sync with the laid-back speed of the lyrics whereas “B-Day shows” a much more aggressive side.

Continuing the theme of money and showing it off, the visuals of wealth and luxury through props and colour palette choices correspond directly to the lyrics of the song. The video is interspersed with shots of the members surrounded by cash and dropping coins. When they aren’t dancing, the colour palette is saturated in tones of gold, copper and bronze — in contrast to the black and white used during the dance segments. The juxtaposition of the cool and warm tones is similar to the “B-Day” video that switches from being shot in black and white to bright rich colours.

Thematically speaking, “B-Day” adheres to the idea of being young, wild and free and executes this by the way of using bees as a metaphor. The song starts off with the members front and center as they are transported into what looks like a jungle. iKon is wearing yellow and black in their wardrobe from the get-go, in different patterns and combinations, in tandem with the wordplay of their title “B to the birthday”. At one point, Bobby is lying in a honeycomb-like structure. The build-up reaches a climax where the members’ faces are edited onto bee bodies as they are shot out of a honeycomb and into the night. The ending shot of the queen bee essentially ties together the running theme in the MV, both visually and lyrically. 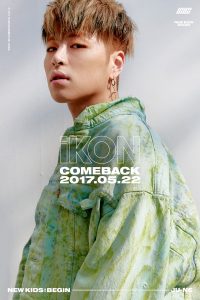 There is also a distinct difference in the atmosphere for both videos as one song is set in an inviting open space and the other has the air of a closed off ‘cool kids only’ space. In “B-Day”, the boys are rarely in an enclosed space. As the ‘bee’ segment would have it, they are all out in the open that is further drawn upon with the vines, trees and leaves. In contrast, “Bling Bling” has them enclosed in a lot of rooms, halls, trailers and cars, and even in the classic party shot at the end of both songs (“Bang Bang Bang”, anyone?). “B-Day” feels like a rave out in the open with the members splattered with bits of neon whilst “Bling Bling” gives off a cool nightclub-esque vibe with shiny patent leather and hues of chrome.

In conclusion, the MVs have key differences that set them apart through the audio and the visuals, even if they are both party songs. If their first album in the New Kids series is upbeat, what is in store for their upcoming albums? Although the slow and sentimental sound is generally reserved for sibling group Winner, given what was said that iKon’s comeback is to showcase a new style, could there be a possible expansion into that territory? While it’s a good tactic on YG’s part to keep the two groups distinct in their own sounds, I can’t help but wonder what could develop if iKon edged slightly out of their comfort zone.