Dumbfoundead Breaks into the Korean Scene with "Foreigner"

Dumbfoundead, Dummy, Parker… no matter what you call him, it’s been established that Dumbfoundead is known for his battle raps and lyricism. It should come as no surprise then, that Foreigner, his first album under Korean record label Born Ctzn, continues to show just how clever Dumbfoundead really is. With tracks that meld Korean and English, plus a title track that puts the exclamation point on the message of the album, Foreigner may be the hip-hop album this year needed.

We start off with “Hyung” the main track of the album with an awesome MV to boot. It’s got some crazy visuals and admittedly cheap looking effects, but the overall effect bring to mind a “Gangnam Style”-type vibe that makes up for everything else. “Hyung” features Dok2, Simon D, and Tiger JK, and if those names aren’t enough to bring clout to a first official venture into Korean hip-hop then there’s no one else to turn to.

The theme of “Hyung” is simple, and Dumbfoundead (w)raps it up in his verse: “Show me respect, I’ll show it back / That’s the code of conduct.” Respect is one of the biggest standards in Korea, and Dumbfoundead is basically saying to hell with that. Respect because of age isn’t gonna fly with him. Instead he takes the more American approach of giving respect where it’s given. This meshing of tradition with a challenging stance comes up in later tracks as well. With “Hyung,” however, it’s more explicit.

In fact, to keep me from gushing about this one song in particular and to move on to the rest of the album, I will leave you with the words of the man himself in regards to the track (included in the MV’s description box):

The first single is “Hyung” ft. Dok2 and Simon Dominic. “Hyung” was the first traditional Korean word of respect I ever learned. I wanted to break down the barrier and create a clear understanding what it means to be a “hyung”. Over the years I have learned that being older than somebody in age shouldn’t automatically earn you respect. You have to SHOW respect to EARN respect. Dok2 and Simon D have earned that respect in the hip-hop community out here and although all of us are young we have earned respect in our separate communities.

The cry for respect is more subtle in other tracks. Take for instance, “History of War” and the following lines:

So glad pops ain’t show me the ropes
I ain’t ever raise my hand to a woman or in class
Won’t obey no man
….
I don’t play that gook or that chink shit
Got me hot like the hood of my Lincoln

In a world where the current hot topics include racism and the treatment of women, these lines in particular hit hard. Dumbfoundead is showing that hitting a woman and/or calling him outside of what he is are things that you just don’t do, and by crossing that line you invite yourself to face his wrath. Violence may not be the answer but it’s the reaction you’ll get for disrespect. 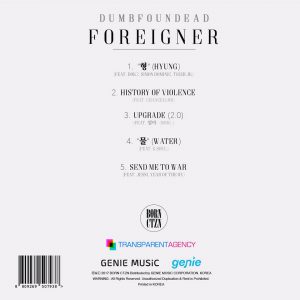 Beyond the respect though, is the lyrical word play that permeates the album, a trait that is Dumbfoundead’s signature. From “물 (Water)” we get: “She want a wedding dress, but I ain’t 태양 (taeyang) / Had to hit her with the cross over A.I.” Breaking it down, we get the obvious allusion to Taeyang’s “Wedding Dress” in the first half. The second half references Allen Iverson, the NBA player who popularized the double crossover, a move used to fake out opponents. Together, the lines translate to coming up with a distraction for his girl because he’s not down to marry her.

Dumbfoundead uses Foreigner to bring together Korean and English, using both to highlight each other. Furthermore, he shows himself as both–an American in mindset, working in a Korean environment, but also a Korean with the culture and history that doesn’t always work in America. On either side he’s a foreigner but he uses that to his advantage to make commentary on issues with both parts of himself. Foreigner is short yet clever, and in the few tracks it has, manages to have both bangers and think pieces. It highlights Dumbfoundead’s talents and is a strong first outing in a new market.