2017 was an eventful year. So far we’ve covered comebacks, debuts,  dramas, and indie releases in our annual End of Year Reviews. Of course we also took some time to talk about one of the elements that is a standard in K-pop: the dances. In the Mid Year Review, a trend in contemporary dances was observed. Here, Gaya and Pat focus more on the wide range of options and what stood out. 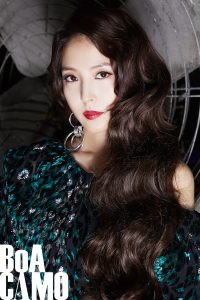 Pat: Making this a top 5 regardless of gender made me sweat. ISTG I kept changing between Ten and Seventeen for the top spot, adding BTS‘ “Spring Day” or “Not Today” and then taking them off because I love those two choreographies, but not enough for this list, and both Dreamcatcher for “Good Night” and Monsta X‘s “Dramarama” made an appearance in one iteration of the list. I debated between EXID and Sunmi. I settled on Sunmi in the end, but not without watching dance practices of “DDD” and “Gashina” a dozen times. This was before I remembered that “Cherry Bomb” was released this year and not last year. The one and only pick that was stable was BoA’s “Camo.”

We have vastly different lists and I love it! We both obviously have really different tastes since I can’t even pinpoint one single song that was on both of our lists. Only trend I see is that we both put an SM artist as our number one.

Gaya: Well, to be honest, I agree with your picks as well; but there were other dances I also enjoyed and figured this would be a good opportunity to showcase them as well!

I was actually the opposite about Sunmi — I was sure “Gashina” wouldn’t make my list because so much of its appeal came from Sunmi’s sexiness and charm, as well as the awesome gender, switched choreography. But looking at the other dances, though they are all good quality, so many looked the same — even solo dances. The table may be a gimmick but it helped “Gashina” stand out. And let’s not forget the awesome gun move in the chorus that has brought forth a sea of dance covers. Because I actually did for a minute.

“Knock Knock” is my favourite Twice dance (so far), but I originally had Momoland’s “Freeze” in its place. The only reason I made the swap was that “Knock Knock” has a better chorus dance than “Freeze” — if only Momoland’s choreographer had injected some of the dynamism from the rest of “Freeze” into the chorus as well, and given them more than one move to perform!

I also swapped out KNK over Vixx because I liked the use of the umbrella props in conjunction with backup dancers in “Rain.” Choreographing routines with — and sometimes around — props can be a challenge, and while I do enjoy how these challenges are creatively overcome, I do also appreciate KNK’s solution of simply handing the umbrellas over to their back up dancers. The creativity comes in the handoffs between the dancers and members, especially in the second chorus, and it also allows KNK to show off their non-umbrella-related moves as well. In fact, the interesting steps and formations in their “normal” choreography are why it ranked above “Gashina” which didn’t have a lot of impact outside of the table parts and gun dance.

But before we get to Vixx, Pat, what was it about “Cherry Bomb” that got it on your list? I admit I loved NCT 127’s execution, they really hit their marks.

Pat: “Cherry Bomb” is a completely and utterly weird pick from me. Most of my picks are based on what I love the most — those gentle and fluid movements mixed in with the occasional sharp movement. There’s Ten’s contemporary-esque dance, complete with contemporary-lite break in the middle. Vixx is yet another group who’s choreography was a mix of these, and it was those gentle movements with the fan that made the dance so memorable for me. It might be because fans have always fascinated me. The same kind of fan was a daily necessity for me in high school and college, and I always enjoyed playing with them and twirling them around.

Seventeen is another group that does the gentleness and sharp execution well with “Don’t Wanna Cry” , making use of their large numbers to create formations that smaller groups simply cannot do. That being said, there are still days where I just want to watch a dance that is all about the execution, and that is where “Cherry Bomb” comes in. Admittedly, I didn’t even pay attention to the release because that horrid music video turned me off before I was even a minute in. I didn’t give it another try until the dance practice (the #Bomb version) appeared on my recommended lists.

Forgive the hyperbole, but it was love at first watch.

I knew they were good dancers — like those in last year’s EYR, I also loved “The 7th Sense.” But NCT 127 is completely different and “Cherry Bomb” was my introduction to them. Their sharp execution and the various dance moves caught my attention. Their choruses were different every single time. There are plenty of movements that are just weird (1:54 mark everyone), and yet they work so well? I love it when groups make use of the whole space. They don’t limit themselves to the middle, but move all around the stage area. But the cherry on the top, and what sealed it as a Top 5 for me, was everything past the 2 minute mark, especially the last 45 seconds.

What about Taemin’s “Move”? What was it about that choreography that made it number one for you?

Gaya: I admit execution ranked lower when it came to making my list; otherwise “Cherry Bomb” would have won over “Burn It Up” because I could literally feel NCT 127 hit those moves through my laptop screen. Formations and transitions tend to make or break dances for me, since they were what I would get most frustrated about when choreographing dances myself, so most of my picks were a result of this preference. That’s why “Burn It Up” made my list, for its use of the stage and movement between the members. “Cherry Bomb” does well in this regard as well, but it is less consistent (though I agree those last 45 seconds are the biggest hit on the stage).

K-pop can be really beholden to dance trends, even when they don’t make sense with the song — it’s the biggest complaint I have about Red Velvet‘s “One of These Nights”. So seeing Taemin, one of K-pop’s most renowned dancing machines, take on something so sensual and smooth for “Move” was like the biggest breath of fresh air. It’s not something everyone can pull off; hell, I wasn’t even sure if Taemin could do it until now. While “Move” is definitely influenced by the dance-focused direction of his Japanese releases, the change in style makes it something more than a simple import.

There is also the fact that the dance exists in different forms (solo, group, paired), and each type provides a slightly different dynamic, but all exude a subtle sexiness that works so well for Taemin and me. More hypersexual displays like hip thrusts and ripped shirts simply don’t hold as much allure as watching Taemin oh-so-casually rock back and forth with the music. A lot of people have talked about how they find the dance to be comfortably asexual, and I think it can be read as both sexual and asexual. The key components here are confidence and subtlety, and we respond to them in our own ways. Rather than giving us a dance that can only be defined as sexy or cute, “Move” offers something more honest and malleable, letting the viewer decide what they want it to be.

And while not everyone can pull this kind of thing off, I would welcome more of it in K-pop.

Pat: Full admission: you describing Taemin’s “Move” made me take another look, then compare this one of his previous tracks. I think I can fully understand and support Taemin doing more subtle sensual choreography such as “Move”. He pulls it off, and looks amazing while doing it. Not to mention, it allows his natural allure to be the focus. I find myself racking my head to think of a solo or group that can pull it off flawlessly, but none come to mind.

Gaya: There are other idols who can pull off contemporary choreography — in fact, I would love to see N do something like this.

Watching Vixx at the MBC Gayo made me seriously question why they are only an honourable mention, because that fan choreo flows so beautifully, but it felt too beholden to sharpness and matching the stuttering beat of “Shangri-La.” In trying to bring that stutter to life, the choreography ended up being less clean overall, especially when compared to the smoother sections. Ten’s “Dream In A Dream” does a better job of this with its contagions and full arm movements, but I would still consider “Shangri-La” superior overall; Vixx just needed to tone it down a tad, to match with the more refined feel of the song.

Pat, did you have any honourable mentions? What about them stood out to you?

Pat: And those are the exact reasons Ten is ranked higher than VIXX on my list.

My honorable mentions are Twice’s “Knock Knock” and Sunmi’s “Gashina.” They aren’t the most intricate, but they’re some of the most fun choreography to watch. Sunmi’s choreography fits with her personality so well, and I can’t imagine anyone else doing the song justice. It is fun with a touch of sexiness and a touch of badassery. Twice’s “Knock Knock” almost made my list, and if this was separated by male and female, they surely would be number two. “Knock Knock” is all about fun and cheeky movements. Considering the ages and general personalities of the members, as well as the concept and sound of the song, it all clicks. The energy of the members sold me on “Knock Knock,” but K-pop is such a wealth of dance-oriented groups that it only narrowly missed the top five. And that’s why it’s an honorable mention.

Gaya: My honourable mentions would basically be your entire list! I think there was a lot of good stuff happening in dance this year, and 2017 overall felt like a decent year in dance. I can’t say I have many expectations for 2018, Pat, do you?

Pat: There has been one aspect in K-pop that has always been consistent: their dances. And the dance routines have only gotten better as the years have gone by, with more foreign choreographers also lending their talents to K-pop groups. 2017 was a really good year in dance. 2018 will surely give us plenty of dances to remember.