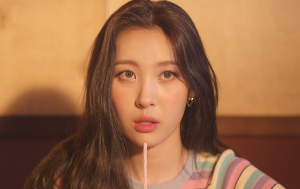 Even without any releases under her belt in the first half of 2017, it’s been quite the year for Sunmi. With the disbandment of the Wonder Girls back in January, and her decision to leave JYP Entertainment after ten years under the label, many fans wondered what the future would hold for the singer. Signing with the smaller label MakeUs Entertainment was certainly a big risk for Sunmi to take, but with the release of her new solo single “Gashina” it appears to have paid off.

For her first release with MakeUs Entertainment, Sunmi teamed up with YG producer Teddy, and his influence is clearly heard in “Gashina,” primarily in the chorus. While the verses are catchy in Sunmi’s half spoken, half sung, seductive style, the chorus hits with a beat drop that immediately reminds me of TOP‘s “Turn It Up” — which, surprise surprise, was also co-produced by Teddy. Even with a slightly lacking chorus, “Gashina” maintains the style of both artists, and ultimately is pretty catchy bop for summer that’s in line with the kind of music Sunmi released as a solo artist under JYP. It’s familiar enough for her long-time fans, but also has the broader appeal that will be necessary for Sunmi going forward under a non-Big Three label.

What really makes this release stand out is the remarkably chaotic, but somehow still cohesive MV that accompanies the release. In “Gashina” Sunmi’s been jilted, and with that experience comes a wave of emotions. While she questions the rationality of the man who let her go in the song, she reaffirms herself through costume changes and some powerful choreography on screen, ultimately reaching the conclusion that the man had to be crazy to leave someone as attractive as she is behind.

Everyone wants my scent
But only you don’t know, like a fool
Are you sure you’re not crazy?

“Gashina” kicks off a little quirky, which is only a preview for the irreverence that is the rest of the video. Initially, Sunmi appears unaffected as she watches her lover leave her behind in the diner. Then she downs his milkshake, and wipes her mouth clean of any trace of her ex lover before launching into a celebratory dance.

“Gashina” balances relatively well all the conflicting feelings that come immediately out of a breakup: the confusion, the bitterness, and the bargaining with one’s self. In many ways, “Gashina” plays like the stages of grief with a refreshing juxtaposition of vulnerability and strength. Heartbreak isn’t black and white, there are dozens of emotions to deal with when a relationship comes to an end. In both in the MV and in the track, Sunmi takes her time sorting through the confusion she’s experiencing, as well as the betrayal that comes with unfulfilled promises:

Emotions have a way of sneaking up on you, taking their time to be fully realized after the initial shock of heartbreak. Which is why after Sunmi’s liberating — almost gleeful — dance in the diner, comes drunken sadness and anger in her living room later that evening. Sunmi continues to capture all the contrasting facets of her emotional state as she wanders from set to set: her drunken evening confidence gives way to early morning seduction in dirty laundry piles, followed by the donning of a disguise of sunglasses and head scarf in her hallway as she moves on to face a new day with conviction.

With a newfound sense of liberation, so also comes Sunmi’s process of letting go, and redefining herself. In the MV, Sunmi serves so many different looks that it’s difficult to keep track of them. She rocks each look and each different persona that she’s trying on in the wake of heartbreak: one moment she’s coy in a blonde wig, the next powerful in a fur coat, seductive in a floral leotard, and nothing short of intimidating in a pink vinyl dress with shoulder pads that would make any 80’s dominatrix proud. Somehow, even with the broad variety of costumes she wears, there’s still a sense of aesthetic cohesion which — in addition to the quirky dancing — makes the MV a joy to watch.

Sunmi dances through each stage of loss, each costume change, up until she’s charging ahead in a bathtub, ultimately returning to the diner — scorned, but confident in herself. Flowers bloom, papers fly around her, her fury and acceptance over the break-up is manifested fully. What Sunmi’s journey of self reflection has done is cement for herself that she’s an appealing woman — like a flower in full bloom — and if her lover couldn’t see that, then that’s his loss. Because plenty of other people, including Sunmi herself, can see all the good things she has to offer.

You have withered, I have bloomed
And it’s over
Even if you wanna come back
You may seem like you’ll be fine without me right now
But no matter how much I think about it
Are you sure you’re not crazy? 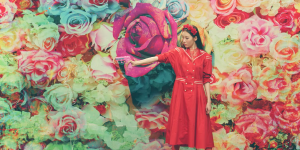 What impresses me most about this release is the unapologetic confidence Sunmi demonstrates. Yes, she’s a little heartbroken and confused, and yes she’s hurt, but that never stops her from loving herself. Even if the confidence is a mask of her deeper emotions, she still dances like a fool, flips off the camera with her pinky, and lets herself go with a kind of uninhibitedness that’s truly admirable.

“Gashina” is no doubt an irreverent send off, as well as a fun journey of self-affirmation. Many wondered what we’d be in for when Sunmi left the trusty hands of JYP, and I think it’s pretty safe to say that most fans won’t be disappointed. Perhaps, in a small way, “Gashina” is Sunmi’s send off to JYP, a statement of her new found independence outside of the label. Regardless of any potential personal significance of the track, with “Gashina” Sunmi has reminded us that is she a formidable solo artist, with impeccable style to boot.