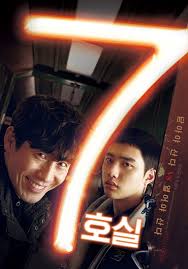 Room No. 7 falls under the intriguing category of a comedy-thriller, a genre wherein suspense is juxtaposed with humorous relief. The dialogues are what make the movie, through which the absurdity of the characters’ actions is put into perspective. Room No.7 marks the director Lee Yong-seung‘s first foray into commercial cinema. Originally an indie filmmaker, Lee has managed to provide a mirror to the nitty-gritty of Korean citizen’s life in a thrilling manner.

The film revolves around the lives of two characters as skirt around each other: Doo-shik (Shin Ha-kyun), a DVD screening room owner who is bent on selling his shop to get out of debt, and part-timer Tae-jung (Do Kyungsoo) works at the store and is also plagued by moneylenders. While Kyungsoo lured me into watching Room No.7, the whole ensemble provided a breath of fresh air. The two main characters are complex in their attempt to find their own morality despite their circumstances. Shin Ha-kyun is perfect as the seemingly deranged and materialistic man with no one but himself to lookout for him. Issues of debt in the middle-class, student poverty, drug trafficking and realty are intertwined to form a relatively simple narrative interspersed with worthwhile messages. 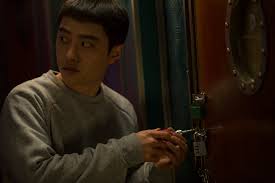 Debt makes man desperate and so Tae-jung agrees to hide a drug package in the titular room number 7 of the DVD viewing store in exchange for payment. Another Korean-Chinese freelancer, Han-wook (Kim Do-young), is hired by Doo-shik when business picks up. Han-wook’s demise in a freak accident within the store sets the story spinning. Not wanting to miss out on an opportunity to sell the store by gaining negative publicity, Doo-shik hides the body in the very room where the drugs are. He also screws the door shut and covers it with a shelf, leaving Tae-jung unable to do anything but wait in order to get the drugs back out. The story progresses as Tae-jung and Doo-shik dance around each other to get what they want–to retrieve the drugs and hide the body. Finally the two cross paths and choose to help each other. The police end up searching the store for drugs but neither the drugs nor the body are in the room. This compels Doo-shik and Tae-jung to contemplate the next course of action.

The cinematic experience is enhanced through beautiful street views of Seoul. These shots presented an acute sense of loneliness, allowing the viewer to feel how alone Doo-shik really was in his endeavor to get back on his feet. Despite this and the dark subject matter at hand, unexpected comic relief is provided when Doo-shik tries to find ways to get rid of the body, such as his sister and brother-in-law’s immersion in watching TV when he hides the body at their restaurant or the allusion to the odour in the DVD room. 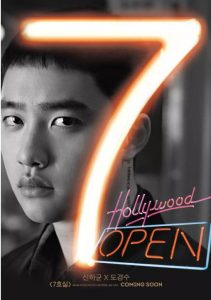 Do-shik’s personality is volatile and difficult to predict. He is a doting uncle, a bad employer and a worse tenant. He has bouts of good will, such as when he treats his two employees to dinner and gives Han-wook cab money, but borders on cruel the rest of the time. The desperation to be debt-free forces him to let go of his conscience. Tae-jung, on the other hand, seems to have ironclad beliefs such as not consuming drugs and being loyal to his employee despite having not been paid for months. He smokes, has a tattoo and appears to be a bad boy, but in an interesting contrast, he also has cute stickers on his laptop and composes music.

The varying traits each of the characters embody paints a more complex portrayal of what could otherwise be stereotypically morally questionable characters, suggesting that the decisions they make are propelled by desperate circumstances rather than any innate depravity. Although the situation paints him in bad light, the story provides Doo-shik with a clean-chit because nobody comes to ask for Han-wook and neither does the police suspect he’s missing. His store is sold and he leaves. But both Tae-jung and Doo-shik display a burst of humanity once their affairs are in order: Tae-jung is unable to return the drugs to the “Tattoo Man” and throws them away in the Han River, and with the body in his car, Doo-shik breaks down in the middle of the road and finally mourns Han-wook’s death, denoting that there is still humanity left in him.

Room No. 7 keeps the audience on its toes, and makes for a worthwhile watch for anyone wanting a glimpse into the underbelly of Seoul.