Exo Deliver Nostalgia But Don't Quite Bring the "Power" 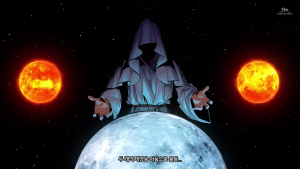 To follow up their success with “Kokobop”, Exo released “Power” earlier this week as part of their repackaged album. It’s a return to Exo’s typical sound, but blander. The MV on the other hand is full of nods to previous music videos and playing with fan theories. With its bright colors and video game theme, the visuals make up for whatever “Power” lacks as a song.

The MV starts out with a self-deprecating jab at their “Mama” MV introduction before moving onto a nod to one of their recent segments of the EXO’rdium tour. Each flip through brings the viewer to another “world” within Exo’s universe. We see the short clip from their first teaser, then a cute scene with a kitten playing with balls with an Exo lightstick in the background, then moving onto a planet with a giant football helmet (clearly a nod to “Love Me Right”) before we are taken to a sci-fi, video game-esque cut scene. After an animated explosion, we see a cross between GLaDOS from Portal and Dr. Octopus from Spiderman reaching out. This robot is Exo’s adversary throughout the MV, and also apparently the source for their powers.

We see the members shooting their laser guns, fighting against the robot and failing until Chen rigs up a shield that absorbs the lightning blast. He then takes that attack and uses against the robot. The whole sequence is very tongue in cheek, with Chen leaping in and saving them all at the last minute. It’s when they defeat the robot they receive orbs that grant them their powers. But it isn’t until Baekhyun appears and obtains his orb that they all are able to use their superpowers. The MV then ends with Baekhyun falling into the ocean, presumably on Earth, while a snippet of “Sweet Lies” plays in the background. 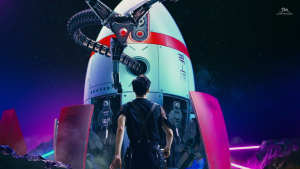 Visually speaking, “Power” is a fantastic MV. It’s a lot of fun to watch with a bunch of Easter eggs for longtime Exo-L’s, from the kitten with a ‘L’ on its collar to the scene of them dressed like gnomes in the beginning. The use of bright primary colors really drives home the comic book/video game aesthetic. The use of animation brought another layer to the MV that we don’t usually see in an Exo video. SM seems to be fond of using animation in their MV’s these days, both 3D and traditional 2D animation, and it does help their videos to stand out a bit. Maybe flashy animation will be their new ‘Dance in a Box’ MV formula.

A lot of the visual elements reminded me very much of shows like Power Rangers and 90’s video games without being too heavily reliant on nostalgia. The entire time I was watching I kept expecting more Dragon Ball references, but was disappointed. The setting itself also reminded me a lot of Tron, which I quite enjoyed.

However, the editing feels very thrown together and poorly planned. For the shots of the members breaking the fourth wall, they linger a beat too long, dragging the pacing of MV which they then had to make up for towards the end. The ending feels frantic; what exactly is the kitten cycling through? We’re probably meant to believe it is cycling through each member, like the ‘Choose Your Fighter’ screen suggests, but it isn’t clear. Then we have the issue that the video shifts drastically as soon as Baekhyun falls out of the sky. It feels very much like a preview for another MV, but as far as we know SM has no plans on releasing an MV for “Sweet Lies.” 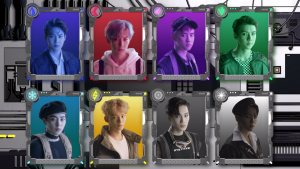 The most interesting part of this MV is the introduction of their use of the Many Worlds Theory from quantum physics. Unfortunately, the execution left much to be desired. The idea that many of Exo’s past MVs are actually all parallel universes is a great theory, one that I love and enjoy, but the introduction of this was incredibly heavy-handed. We have the “Mama” opening with the flipping through different worlds, very clearly shouting to their fans “Hey! Parallel universes! Cool, right?” And it is cool, but it was a very clumsy way to introduce this concept. If SM wants to pursue this as a concept, I’m all for it, but maybe they should rethink how they want to tie it into Exo’s overarching branding. At the moment, it isn’t working and I really, really want it to work, but alas, here we are.

The song “Power” leaves a lot to be desired. It’s bland; it sounds a bit like a trance version of a song from a Disney musical. Only the chorus really leaves an impression, with the rest of the song fading into obscurity. After “Kokobop,” “Power” falls flat. The backing beat is just a driving drum with synth snares to help add syncopation while the bassline just follows the bass drum with a few fills during the pre-chorus. If you took away Exo’s vocals and replaced them with another group or pop star’s the song would still be boring. Don’t get me wrong, if this song came on a night out, I would be on the dance floor, but unlike “Kokobop” or even Exo’s other more EDM inspired tracks, I know I won’t be listening to this song on its own. 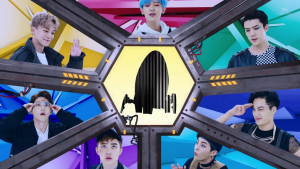 “Power” is a fun comeback with some of the most entertaining visuals we’ve seen from Exo in a while. The MV is a delight to watch, even with its flaws. While song is forgettable, all the fan created content from this comeback makes up for it. Moving forward, if SM really is going to delve into the Many Worlds Theory, I hope they develop it and give it the complexity the fans want. Overall, “Power” is saved by the music video’s quirky visual elements.