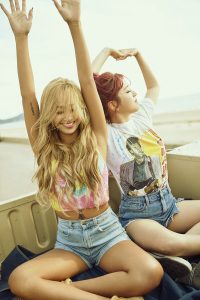 When Sistar disbanded, everyone had the same thought: What’s going to happen to summer? The answer: Hyorin will come out with a song to remind you that she’s still going strong. Teaming up with fellow Unpretty Rapstar alum, Kisum, the pair has released “Fruity” with a music video that looks suspiciously like an ad for Lipton Iced Tea. Sipping tea by the poolside–or in this case, in the club/disco/all around hangout spot–is totally the thing to do when it’s summer and you need to unwind. With Kisum missing from the MV, Hyorin truly shines and if you squint just right you might convince yourself that Sistar released another summer jam for you. Almost.

Not only is it on trend–NCT127‘s “Cherry Bomb” and Red Velvet‘s fruit centered teaser seem to point toward a theme for the season–“Fruity” takes all the best things about summer and rolls it into one. There’s the cute girl and her friends all dancing together. Hyorin models various outfits that include short shorts and a glittery dress. The group all play foosball with attractive boys while music blasts from a jukebox. No doubt about it, everyone is having fun.

Looking at the MV as a commercial or ad instead of just a music video is the only way to really look at it. In that way “Fruity” is very much like a Coke ad back during its “Open Happiness” campaign. The idea behind the campaign was that opening and drinking a coke made you a happy, and you can spread that happiness to others by sharing a Coke with them. In the same vein, “Fruity” starts off with an unhappy Hyorin who is pouting in her car and looking sadly at her phone. Enticed by the neon lights, she enters an upscale looking bar and orders a drink. With just one sip, her whole world changes. 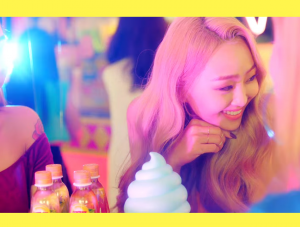 This is already some pretty effective advertising, less than a minute in. Hyorin’s unhappiness at whatever message she got (or didn’t get) and her frustration with the situation are highly relatable. Many people attempt to momentarily forget their troubles by drinking in a bar. We’re brought into a world that is very normal and so we can connect. And when I saw it was tea she was drinking, I laughed, yet I kept looking for that tea bottle. But I’m getting ahead of myself.

After Hyorin takes her first drink, she’s no longer alone. She doesn’t have straight hair and she’s not covered up anymore either. She now has friends, beach waves, and a few different brightly covered outfits. She’s smiling a lot more than when we first see her. It’s like her whole outlook on life has changed just because of that drink. The room she’s in even turns from this swanky bar into a Grease-esque diner complete with milkshakes and a jukebox. Her life has turned into a party because of this Lipton tea. There’s a disco ball, neon signs everywhere–they’re skating indoors! If all I have to do is drink some tea to get a full on retro party like that to happen to me then I’d do it in a heartbeat. 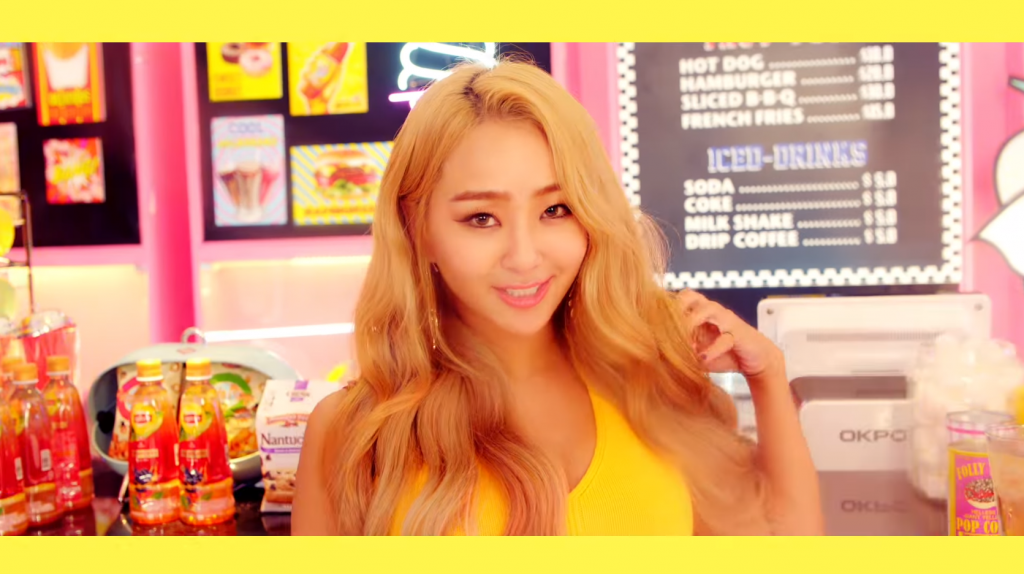 But how does that add up to effective marketing? Besides making me want the drink–and I’m not even a tea drinker–I was looking for the drink. Aside from the first shot, the tea bottle isn’t always blatantly in your face. It took several views to connect that she was drinking tea through the treble clef straw. But her friends are dancing and holding the bottle. There are several bottles in the background, on tables and the counter that are just casually placed there but still draw the eye. There’s even a brief shot of a vending machine of nothing but tea. Yet it all blends in seamlessly to the colorful controlled chaos of the video. Not only does it make you desire a product, it does it so unobtrusively that you don’t mind.

I have only one problem with the video: Kisum’s absence. Several teaser photos were released of them together, and from the looks of them the video was meant to go in a different direction. It’s a shame that Kisum wasn’t in the video as her rap added a much needed dynamic to the song itself. It could have been nice to see her and Hyorin play off each other. Perhaps Kisum could encourage Hyorin to try different flavors which all turn out to have different effects? The possibilities were endless but we will sadly never know the true potential of the collab. 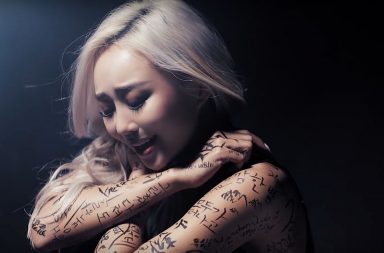