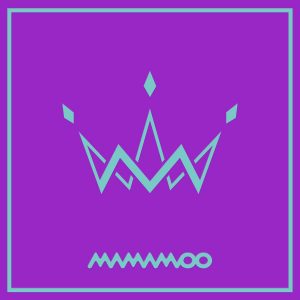 From their beginning, Mamamoo has been a group that just has it all. They have  everything a group needs to succeed: great voices, great stage presence, and songs that never fail to make the audience sit up and pay attention. Their  high-quality retro sounds and fun concepts have been just as instrumental in their success as anything else. Mamamoo has never put out a song that is not both an extremely well-crafted pop song and a smart piece of pop culture. However, their albums are not. They tend to have amazing bombastic singles from EPs and LPs that are good, but not great.

Most people think of albums, whether full releases or minis like Purple, as having two key components: music and lyrics. I tend to view them as having three: music, lyrics, and music and lyrics. In other words, an album’s main elements are what it sounds like, what it says, and how those two interact with each other. On Purple, the music is solid, but without any real highs, the lyrics pop at times, but lack cohesion, and putting them together feels like a jigsaw puzzle, only you lose the picture of what it’s supposed to look like.

Aurally, Purple is living in R&B, specifically mid- to late-90’s R&B in the vein of TLC and Destiny’s Child. This is a great direction to take, as the more subtle, richer sounds allow Mamamoo to flex their vocal ranges in both directions and really luxuriate in the power they have. The mixes are primarily bass and drums, but balanced with enough synth to capture not just the sound, but the energy that made the 90s girl groups Mamamoo is emulating so great — their balance of lush femininity and strength. Purple comes off as quietly defiant; not trying to change the world, but refusing to bend when the world tries to change them.

Which is where the lyrics fail to connect to the music. There is plenty to like lyrically. The album standout is absolutely “아재개그”, officially translated as “Aze Gag”, but a more accurately translation would be “dad jokes”. Which is what the lyrics are — the lame puns that are a universal requirement for all fathers. This is utterly weird in the best way; outside the box and hilariously unique. We also have title track “Yes I Am”, a  girl power anthem wherein Mamamoo proudly declares themselves as confident, cheeky, lazy, and arrogant, with monolids, chubby cheeks, and no showing skin. It’s the kind of song that’s withers those who speak against them, because they love themselves, and everyone else does not matter. 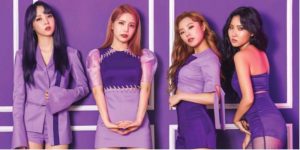 Where things start to get problematic is on “Finally”, “Worthless” and “Ra Da Ra”. “Worthless” in particular stands out as a gorgeous track. A solo for Moonbyul, she laments the state of her relationship. Her boyfriend is a user, making demand after demand on her time and energy, but is never there in return; leaving Moonbyul feeling alone and worthless. Yet, she can’t bring herself to leave him, because she loves him. This in in sharp contrast to “Finally”, which precedes it, and “Ra Da Ra”– a Wheein solo featuring Jeff Bernat and B.O. — the album closer. These songs are both about new relationships. More specifically, both “Finally” and “Ra Da Ra” depict Mamamoo flinging themselves into new relationships with reckless abandon. They’re so intense in how this new love is everything they want and need that “Finally” and “Ra  Da Ra” inspire less feelings of romance and more feelings of trepidation.

Make no mistake, the element that keeps tripping Purple up is the narrative. Purple opens with the independence and self-love of “Yes I Am”, and then throws it the window in favor of new love on “Finally”; a song that is about how Mamamoo and their crush object are finally together. Then it shifts to “Worthless” and an  emotionally abusive relationship that Moonbyul will not leave, because she loves him more than she loves herself.  “Aze Gag” is brilliant, but still jarring after “Worthless”, all before ending on the starry-eyed “Ra Da Ra”. With this framing,  Mamamoo does not come off as confident, strong women. They come off as women who will front being strong and confident until they are paid a speck of romantic attention, at which point their self-worth is abandoned in the name of not being alone.

That unfortunate implication is only amplified by Mamamoo’s vocal style.  Every song on Purple with the same clear, unrepentant vocal tone. Each piece is performed with utter conviction; every song is given equal weight. There is no doubt in Mamamoo’s certainty in their choices. There is no difference between “Yes I Am” and “Worthless”. A song like that should sound raw and vulnerable; try to capture the tragedy of being in a toxic relationship and being unable to break away,  but Moonbyul sounds as determined in this as she does on “Yes I Am” or “Finally”. There is no regret, no hint that the carousel of relationships is taking any kind of toll. It’s just new love after new love, with Mamamoo blissfully along for the ride.

Purple sounds fantastic, and has some truly great songs on it, but the implications and subtleties of it make it a mini that is best enjoyed in pieces, because the whole is not nearly as nice.