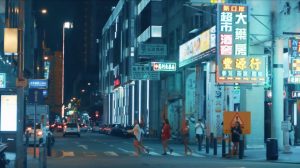 The interactions of K-pop group members generally echo the dynamics of college roommates. By that I mean the kind of relationship where you know another person’s habits as well as your own, perhaps against your will, and when you feel comfortable enough to do anything around them, because they’ve already seen too much. If you’re lucky, they become your close friends and confidants — the people you can do anything with or travel with, luxuriating in their mere presence.

Such are the bonds on display in Sistar’s “Lonely” MV, which tags along as the girls wander through Macau. We follow them past Macau Tower and into the Venetian casino; yet despite the city’s distinct mix of European and Asian architecture, the scenes of them strolling down neon-lit streets, running through parks and halls, and goofing off in hotel rooms feel ethereal. What matters here is not the landscape Sistar is grounded in, but the way they laugh and dance to each other, as though they could be anywhere and anytime in the universe. 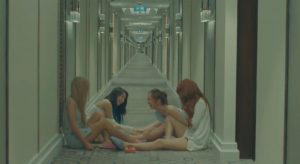 This is, after all, Sistar’s final statement to fans. Their last release comes at a time when second-generation girl groups have been disbanding in a succession of falling dominoes: they were preceded by 4minute, the Wonder Girls and 2NE1, to name a few. But thus far, “Lonely” stands out as the most gracefully planned disbandment release. Produced with all the members, and wholly backed by Starship Entertainment, the goodbye comes across as an earnest effort to encapsulate Sistar’s seven years as one of K-pop’s most consistent and successful artists.

For one, members each penned positive handwritten letters to fans after the company confirmed disbandment — ensuring that the final release would indeed be a cohesive effort from the artists and their management. This was followed by Starship’s short goodbye clip that doubled as an early teaser for “Lonely,” and again reassured netizens there was no bad blood in this breakup. Compared to 2NE1’s end, which involved scapegoating Park Bom and releasing a song without Minzy, Sistar has managed to conclude their group career cleanly on a high note, with one final all-kill on summer’s music charts.

But rather than an upbeat jam, we’ve received a slower, pared-back song built around an acoustic guitar line – the kind of sound designed to spotlight Hyorin and Soyou’s bright and airy voices. Their vocals have always had a radio-friendly, loopable purity that helped them conquer pop charts, and it’s only fitting to close the group’s discography in a way that attunes listeners to their signature tones. 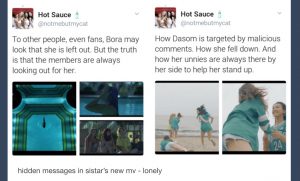 Like other break-up songs, “Lonely” rides on feelings of despair to refer implicitly to the end of their time with Star1s. “Why do you keep going / I’m alone and lonely,” they sing plaintively, empathizing with the pain of those who have long supported them. And in a kind of call and response, this thoughtful approach to disbandment has been met with a torrent of emotional messages from netizens worldwide. Fans have even taken the MV on an Easter egg hunt, screencapping images to derive hidden meanings from the various member formations that appear.

This intensity emerges from a time of sadness, but also a finite period of grieving. “With time, everything will be forgotten,” whispers Dasom, to remind fans that their sorrows, too, will pass. Like the inevitable farewells exchanged between roommates, so too must Sistar wave goodbye, and begin new journeys as soloists of K-pop.