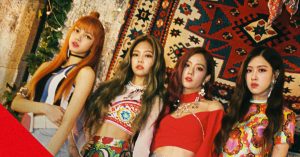 Nearly 7 months since their last dual title tracks through the SQUARE series, Black Pink is back with an upbeat summer hit whilst preparing for their “SQUARE THREE” release. Along with a chock full of bright colours, ostentatious outfits and seasonal motifs, “As If It’s Your Last” lyrically captures the youthful spontaneity of summer.

The song starts off with a colour palette that matches the group’s namesake before it starts to become interspersed with cheery summer colours. It also starts off with the beat that is reminiscent of “Boombayah” but progresses to be more lively than its predecessor. The mish-mash of vibrant sets is a signature of YG and for a song like this, the calculated chaos works to enhance the MV rather than distract the viewer.

Playing off the duality of the colour palette of their name, the pink side in this song seems to represent the fun and lively side whilst the black shows a more sexy and chic look. The contrast is the strongest during Lisa‘s rap verse where the MV couples the following lyrics with shots of her holding cotton candy and spitting her rhymes in front of a car wearing metal body jewellery.

Summer MVs are known for throwing caution to the wind when it comes to colourful outfits, but this song takes it a step further. Aside from the schoolgirl outfits that are predominantly seen when Black Pink is dancing in front of the coliseum-like stage, almost all other outfits include loose and flowy pieces. From Jennie‘s tie-dye shirts, floral kimono tops to Jisoo‘s ruffled dress to Rose‘s checkered blouse, these are fairly standard. However, it’s Lisa’s latex hot pink thigh-high boots and printed jacket in front of the psychedelic backgrounds that pushes the styling to over-the-top in just the right way. 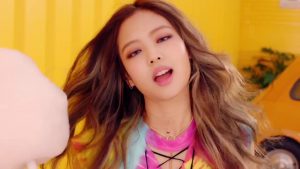 Along with the obvious styling choices, the video also provides us with visuals and motifs that leave no doubt as to what kind of song they are putting out. The song makes use of props such as cotton candy, teddy bears, a neon rose design for the namesake member, a hammock, big jewellery along with prints on headbands, dresses and a few background shots . Summer tropes are also present in scenes of the members in front of a bright yellow setting, lounging in a car, and in particular with Jennie holding ice-cream in front of a ice-cream truck in her name.

Lyrically, the song speaks of a summer fling with elementally coded lyrics, similar to “Playing With Fire” where romantic attraction was comparable to fire. In this song, the fleeting and heady nature of summer love is comparable to temperature and heat.

“My pride is bruised, I’m burning up
My face is hot, my heart keeps racing”.

The song looks further into the slippery nature of a summer romance with this:

“You’re like a fistful of sand
It’s like I can hold you but I can’t
You’re not easy, that’s why I want you more”.

The final notes of the song speak to the exhilaration, to enjoy this relationship for what it is and simply living in the moment. 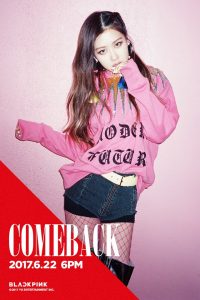 The song starts off with an upbeat pace but has a heavy instrumental influence for the first part of the chorus that sets the expectation for a summer pop song. However, Rose’s pre-chorus dials down the beat significantly as it slowly begins to gain momentum for the chorus itself. The song suspends itself for a second before the beat drops again. Lisa’s brassy vocals in the chorus (and her rap, in extension) keeps the high-pitches of the other members in balance and gives the song some much needed texture. In turn, this turns into a summer song with an edge that gives the group an overall crisper sound. At the end when the song suspends itself for one last time, we hear “Black Pink in your area” — a major nostalgic throwback to how they started with their debut song.

Overall, the lyrics of the song are nothing too original but the sound itself shows the progress in the members’ vocal quality and how they’ve adapted their existing sound for a seasonal release.