Ah, Black Pink. Is there any K-pop group out there with more said about them, more opinions shared, more hot-takes given? One of the true giants of the third generation, they are often bested in the fans’ Statistics Olympics only by BTS, and even then, they have been able to hit some goals of their own. I won’t list them here, but, suffice to say, if you know K-pop, you know these four girls, still the jewel in YG Entertainment’s crown.

One of the core talking points about Black Pink has always been their differing approach to releases from the typical K-pop schedule. Rather than multiple releases and mini-albums per year, since 2016 they have only released a total of 12 singles and 2 studio albums. This is much more in tune with the Western pattern of music releases, and has led to an intense amount of hype around each single that the group has dropped. Their latest, Born Pink, is no exception. The pre-release and title track, “Pink Venom” and “Shut Down”, have already racked up almost 400 million views in just a month — not too shabby.

However, this approach, whilst evidently effective in garnering attention, also has the effect of bringing the anticipation for the quality of Black Pink’s work to match the level of buzz. As the successors to 2NE1, with smash hits like “As If It’s Your Last” and “Whistle” under their belts, this anticipation is justified, but has repeatedly led to diminishing returns.

Which brings us to Born Pink. A strange album of two halves, this release gives us a track list that seems to have divided itself in terms of purpose and intent. Frontloaded by three lacklustre formula re-treads, the album then pivots into an emotive, retro-styled look at the ambiguity and hurt of relationships. It’s almost as if we have been served with both public and private Black Pink, with all the energy and creativity given to the latter half.

In a disappointingly predictable move, the first three tracks, “Pink Venom”, “Shut Down” and “Typa Girl” feel like an exercise in copying and pasting the comfortable formula. If you’ve heard any Black Pink title track before, there’s a good chance you’ll be able to write out the structure and subject matter of each song without even listening. Whilst, in fairness, it is always more difficult to play with line structure with fewer members, the patterns have now become so predictable (for example, Jennie opening the first verse, transferring to Lisa, and having the two come together on shorter rap sections in the second verse) as to make the songs automatically less exciting.

Among the three, the most innovative is actually the title track, “Shut Down”. This is largely thanks to the classical violin sample of Paganini’s 1826 “La Campanella”, a sharp yet swirling piece that slices through silence to begin the song and continues throughout. The consistency of this sample necessitates the accompanying mid-tempo hip hop beat to stay the same: no drops here. It creates a sense of confidence in the overall tone of the song, which we would expect from a group of this status.

A similar attempt at using atypical instruments is used at the very beginning of “Pink Venom”, in the form of the traditional Korean gayageum. It is plucked at the start of the song as the girls eerily chant “Black Pink”, a really exciting start that hints at something stranger or even scary in tone. Unfortunately, this is quickly dropped for the usual noisy beats and zipping synths. “

Typa Girl” similarly relies on unexciting plonking pianos, electric organ-style openings and computerised eighties electronica. There is no flourish in either of these songs, and the formula of past tracks from the “Typa Girl” writer Bekah BOOM (who gave us “Pretty Savage” and “Kill This Love” among others) is frustratingly obvious.

But, far more than the music, the lyrics of these three songs hit varying levels of…let’s say eyebrow-raising. Black Pink (and all of K-pop really) are no strangers to cringe inducing lines, but there are some new low points here. A particular standout is Rosé’s brag attempt in “Shut Down”:

It’s unclear whether this is an attempt to be funny, casual, or even cute, but suffice to say, it fails at all of them. “Straight to ya dome like woah woah woah” from “Pink Venom”, a song that feels like it consists of about 50% chanting, is similarly vapid. “Typa Girl” aims higher only in the sense that it leans painfully into pick-me-girl-boss territory.

I bring money to the table, not your dinner

Both my body and my bank account, good figure

Thinking ’bout me, but there’s nothing to consider

If I let you in my circle, you a winner

The frailty of the sentiment behind these lyrics, paper thin as they are, truly undermines any serious attempt at attitude that formed the cornerstone of the Black Pink brand. Who is doubting that these girls are rich and not housewives? Who is that lyric for? The emptiness becomes painfully obvious very quickly in these three songs.

But then, somehow, everything changes. Following “Typa Girl”, we get “Yeah Yeah Yeah” and later “Ready For Love”, the peppy sisters of 2020’s “Lovesick Girls”. The first of these could come straight out of an ad for Hawkins’ Starcourt Mall, so vividly bright are the 80s synths that bounce through the chorus. A fairly straightforward concept of someone wanting their love to admit their feelings, it’s so much lighter in tone when the tired old ‘swag’ coat has been shrugged off.

“Ready For Love” hits even closer to “Lovesick Girls” in terms of 2010s style EDM energy. There is a similar theme of not having love but preparing for it, and the chorus follows comparable anthemic lines, alongside joyful electronic brass. There’s even a particularly lovely flourish where Jennie adds in more syllables to her lines in the pre-chorus. Whilst the title tracks are weak in feeling like repeats of formulas, these two songs feel more like extensions of an angle that Black Pink has not explored as readily.

Another genre that Black Pink has explored less is the ballad, which in Born Pink becomes one of the stand outs. “The Happiest Girl”, a tender piano piece that doesn’t stray instrumentally, isn’t exactly revolutionary in terms of topic. The girls sing of pretending to be happy when they’re in fact heartbroken—it’s not a new idea. But god is it refreshing to hear them stretch their vocal muscles! Jennie’s deeper notes really resonate, Rosé’s expressiveness comes through, and Jisoo’s high notes are utterly beautiful. It’s a revelation after the posturing of the album’s opening, and the level of emotion given suggests that the members are comfortable in this mode.

The album is completed by “Tally”, a moodier, slower tempo proclamation of personal independence, and Rosé’s solo “Hard to Love”. Both use electric guitars to set a moodier tone, and each song also confidently features swearing, again hinting that the audience for these songs is distinct in some way from those they made the title tracks for. “Hard to Love” uses a relatively chirpy guitar riff and solid drumbeats in the chorus to contrast her own laments of how difficult it is for her to maintain relationships. Again, we have a sibling here: this song is definitely in the same family as her solo work, “Gone”.

“Tally” is sleepier and woozier in its rhythms, which again allows more space for what are actually the most strong-minded attitudes of the whole album.

I say “fuck it” when I feel it

‘Cause no one’s keepin’ tally

I do what I want with who I like

When the desperation to appear cocky and badass are taken away, the album actually reveals a far more honest experience. The lyrics here do not have any real flourish or wordplay, but become all the more genuine for it. Far from making car noises, this chorus almost feels like the members talking to us in an intimate late-night conversation. Again, braggadocio aside, there is so much potential for expression that reveals itself.

This is the strange, and I believe unintentional, duality of Born Pink. There is such a clear split between the songs that have been promoted as title tracks and the majority of the album, that it feels as though they were made for entirely different purposes. “Pink Venom” and “Shut Down” are so stamped with the ‘badass’ ‘swag’ ‘luxury girl crush’ branding that they are weighed down by them, struggling to even breathe. It’s the exact Black Pink formula with little to commend it, and it feels built for those expecting exactly that. These songs are the Black Pink we all know, to a fault.

But there is the other side, the joyful eighties retro, the heartfelt lamenting, the laid-back rock. With the blue language in several of these, and the abundance of English (“Hard to Love”, “Tally”, “Typa Girl”, and “The Happiest Girl” are all entirely without Korean), it does seem as though Black Pink are at least seeking out more mature Western audiences, if not leaning into them. We can even glimpse a little more involvement behind the scenes, with Jisoo and Rosé credited as lyricists on “Yeah Yeah Yeah”.

Born Pink is at once almost pastiche of the Black Pink aesthetic, and a genuine exploration of music and expression. It is the Black Pink that YG relies on and that so many have come to expect, but it’s also Black Pink as talented, soulful group members who can lead an anthem, an eighties bop, woozy rock and even a ballad with the best of them. If this second, less public Black Pink is brought to the fore through this album and beyond, they could finally move beyond the cast iron mold set for them, and build a discography that truly shows what they’re capable of. 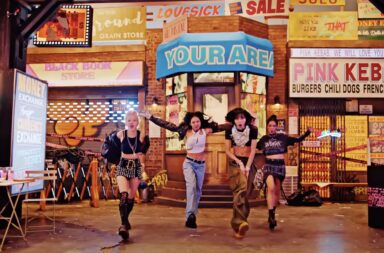