Psy's 4x2=8 is Playful But Introspective 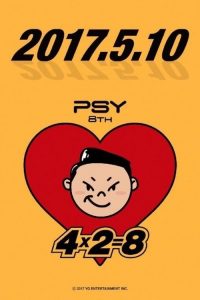 One of South Korea’s most widely known stars, Psy is famous for his liveliness and whimsical sense of humor. Back with his eighth album, the artist showcased his playfulness once again in the title of his album, 4×2=8. In the Korean language, 4 is translated as “sa” and 2 as “i,” together forming “sai,” as Psy is written in Hangeul. And the 8, of course, refers to this being Psy’s eighth album.

Known internationally for energetic pop songs with catchy lyrics and quirky dance moves, Psy keeps his throne as the king of dance music but also reveals a more intimate look inside his head as he touches on various subjects from the inevitable end of romantic relationships to fears of change and growing old. As the album progresses, the confidence and energy that exude from his initial tracks slowly give way to more reflective, nuanced songs which expose his inner doubts and conflicted emotions about his place in the world and the music scene. Three main themes rise from the album – his stylistic feats as an artist, his relationships with other people, and his individual growth as a person.

Starting off the album strong, Psy showcases a variety of artistic styles in the songs “I LUV IT,” “New Face,” “Bomb,” and “Rock will never die.” Working with Zico on “I LUV IT,” Psy opens up his eighth album by establishing how happy he is with all of the ups and downs in his life, unburdened by any negativity. The simple electronic beat of the verses is intensified by layers of additional instrumentation, slowly building up to the synth-saturated chorus. Psy’s passionate declarations of “I love it” are repeated throughout the chorus, creating a catchy hook and making it easy to sing along to. A delicate balance of variation and interruption of the phrase allow the repetition to remain energetic without growing stale.

“I LUV IT” and “New Face” both play into the quirky electronic dance style Psy is famous for, but he also branches out as an artist to explore other musical styles as well. One of the most experimental songs in the album is “Rock will never die.” A tribute to rock music and Psy’s love for it, the track showcases a unique fusion of electric guitar and other rock elements with Psy’s unique pop style, a blend which sets it apart from the rest of the album. “Rock will never die” is a brilliant glimpse into Psy’s more experimental side as he continues growing as an artist and trying out new sounds.

Along with featuring a range of artistic styles in his album, Psy also delivers meaningful lyrical content. Through “Last Scene,” “Fact Assault,” and “LOVE,” Psy establishes his identity in relation to other people, dishing out insults as easily as he offers wisdom. Psy’s sweet, tender side comes out in “Last Scene,” featuring Lee Sung-kyung whose high and clear vocals mesh perfectly with the melody. The song details the mutual bittersweetness of a couple who are coming to terms with the end of their relationship. Violin music in the chorus adds to the melancholic feel and provides a contrast with the electronic synth used heavily throughout the rest of the album. 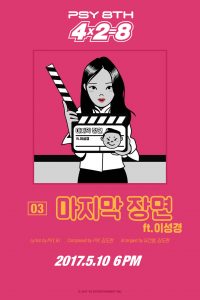 “Last Scene” is a look into how the brightness and energy of the title tracks Psy is famous for don’t always reflect the deeper current of more tender human emotions beneath his exuberant front. While “New Face” is all about the heart-fluttering excitement of meeting someone new, “Last Scene” marks the painful end of that relationship. The couple’s breakup is tough for both parties, but they are mature enough to be able to part without resentment from either side. The melody is fairly sweet and simple throughout, fading to the barest notes in the bridge to emphasize the persona’s heartfelt thanks to his girlfriend for supporting him through everything. They both dated knowing that they would eventually break up, revealing a certain wisdom gained from experience – the couple is too disillusioned to believe that their relationship will stand the test of time.

Doing a complete reversal of attitude in “Fact Assault,” Psy switches from his gentle approach with romance to a ruthlessly vicious approach with haters. Featuring G-Dragon, the searing diss track boasts of Psy’s accomplishments, making it clear that he’s proud of everything he’s produced in his musical career, from his debut song to the international hit “Gangnam Style” to his most recent work.

You ask ‘Psy? Psy from back when?’ Psy from today, you motherfucker
First you supported me when I became a world star
Then you talked shit that I lost my touch, you fucking bakayaro
Since my debut song ‘Sae’ to this song right now
All I’ve done is stand here in my own place
Working my ass off doing my own shit I’ve come this far

Self-assured of his place as one of Korea’s top artists, Psy takes his time to crush his opposition with an unhurried electronic beat reminiscent of the beat and laid-back rapping style used in the collaboration stage for “₩1,000,000” between Okasian, G-Dragon, CL, and Bewhy at the 2016 SBS Gayo Daejun. The minimalist tune – somewhat unusual for a diss track – supports the vicious lyrics well, as Psy’s rap is enough to tear down his haters without any intense instrumentation needed to back him up.

Falling into a middle ground between the softhearted “Last Scene” and the venomous “Fact Assault,” the easygoing “LOVE” focuses more on Psy’s experiences with the world in general. Having once felt out of place in society, Psy now realizes that rather than blaming the world, the answers to his problems lie in love and understanding. This feeling of being at peace with the world is supported by the cleaner, more minimalistic beat in “LOVE” which sets the track apart from much of Psy’s other synth-heavy work. Psy’s musings on his experiences with success, envy, and senseless advice are supported by a softer melody while the chorus brings out an electronic synth beat to back up Taeyang’s strong vocals. 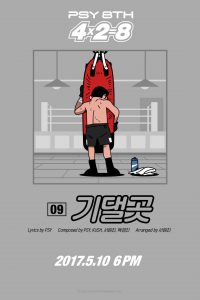 The most introspective songs of 4×2=8 fall near the end of the album where Psy digs deeper into his psyche. Openly discussing his childhood dreams and the journey that led him to where he is today, Psy is honest with his struggles in “Refuge,” “We are young,” and “Auto Reverse.”

“Refuge” is one of Psy’s most vulnerable songs with a simple, sorrowful melody that lets Psy’s powerful vocals as a singer shine through as he expresses his pain. He sings about struggling in life as he pretends to be okay but is actually feeling as though he can’t endure any more hardships. Looking for some form of comfort in the world, Psy shares his weakest moments with listeners in the heartrending song. In a separate interview, Psy mentioned how he felt depressed and stuck as an artist after the huge success of “Gangnam Style,” unable to find any passion for his work until iKon’s B.I. gave him encouragement, which finally sparked some inspiration and desire to create music again.

The album closes with “Auto Reverse,” a nostalgic song well-suited to close this chapter of Psy’s career. Using an old school-influenced melody, he and Epik High’s Tablo rap about the feeling of growing old and being unable to keep up with the world’s relentless speed, and a woman’s emotional singing in the background adds to the sentimental feeling. He describes the feeling of slowly being forgotten, and frustration at the idea of having sacrificed so much just to become just a good memory for someone. Unable to stop the world’s unforgiving passage of time, the rappers take comfort in the past, watching the same movies and listening to the same songs they always have.

Our life and the world is becoming so volatile
And it’s all fast, so fast. I’m just obsolete
Forgotten like a single shoe without its match
Looking through my memories that were as hot as burning coal
Life is just like watercolor paints, blurry and stained
I didn’t throw everything just to be left as a good memory and as a good experience

These lovely lyrics lamenting the cruelty of time expose a rawer side of Psy, whose fears of growing old and the subsequent changes are found in all of us. Psy’s fears and frustrations captured in this song make up a part of the wide range of emotions and experiences he shares with us throughout the album, all of which serve to humanize him. In a culture which often treats idols and celebrities as rather one-sided and without feelings, Psy’s honest exhibition of his various merits and flaws, good times and bad times create a collective work that breaks past the barrier of “celebrity” so that anyone can understand him and share his experiences. Psy bares his soul in 4×2=8, digging deeper than simple feel-good music in attempts to ultimately capture the human experience.