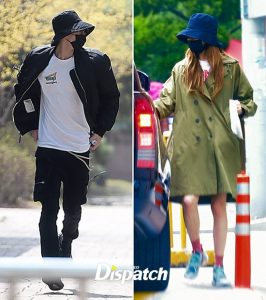 There’s always a bittersweet, nostalgic tug at the heartstrings upon approaching the last page of an enthralling book, and that was exactly my sentiments when Weightlifting Fairy Kim Bok-joo closed its curtain with its final episode. But it looks like it isn’t the end for our favorite Swag couple. On April 24th, Dispatch had released pictures of co-stars Nam Joo-hyuk and Lee Sung-kyung going on a date, surreptitiously clad in baggy clothes and face masks to avoid reporters. Following that, YG Entertainment had confirmed that the two models are indeed dating and April marked their fifth month together.

Prior to that, the two have been longtime friends and acting partners – their first drama together was Cheese In The Trap in 2016. But dating rumors only sparked during the airing of Weightlifting Fairy Kim Bok-joo, when their intense on-screen chemistry was nearly impossible for viewers to ignore. Fans’ fantasies and curiosity were even more fueled by the couple’s Instagram posts, which reeked of suspicion. 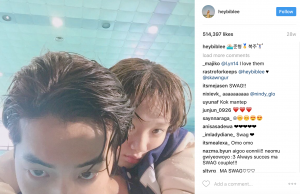 Sung-kyung’s first post of Joo-hyuk dates back to October 2016 – a picture of them at the drama’s swimming complex set, possibly taken before they were together. In response to her post, Joo-hyuk clarified in an interview with MBC’s Section TV, “That [pose] was because the water was too cold and we had to survive. She’s more of an older brother with a great personality, who always looks after me.”

But what instigated the announcement would probably be Sung-kyung’s Instagram post at Coldplay‘s concert in April. The model-actress had uploaded a photo of a blurry figure but fans had pointed out that Joo-hyuk owned a similar top. Many concertgoers had also reported seeing the two at the venue. Eventually, Sung-kyung removed the post off Instagram, which heightened speculations of their relationship and caused an uproar of tidal waves. But before it was deleted, there were many comments that expressed favor of them dating. 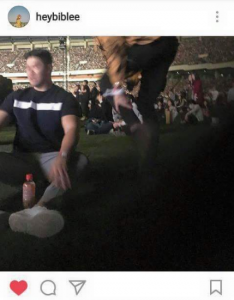 As mentioned in my previous article, the fine line between admiration and obsession still stands. But to say that fans are generally becoming more accepting of celebrity relationships would be making a sweeping statement. Then, how does the relationship between Sung-kyung and Joo-hyuk mark a shift between fans and idolatry?

Though there are more fans who are starting to understand the distinctive line between admiration and obsession, resulting in a more favorable response towards celebrity relationships and marriages, there are also underlying factors that can ideally shape the reactions of netizens. Hence, this begs the question: what makes a well-received couple?

There has been a rise of on-screen romances translating into reality and that transition itself is less appalling and controversial compared to idol romances. Generally, it’s easier for co-stars and actors to date than idols, perhaps due to the fact that actors have had interaction and chemistry with their on-screen partners and fans appreciate that familiarity. 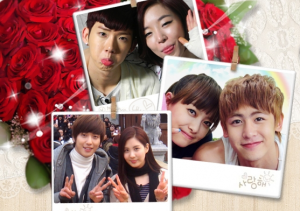 Even for shows like We Got Married, celebrities who were guests on the show are often shipped in real life, including Jokwon and Ga-in, the famous Adam couple, and Joy and Sungjae. There are many who still hope that the on-screen romances would continue in reality. Though formally recognized as idols, they’ve now taken on the role as an actor for the programme and this status change eases some allowance in the way netizens perceive the idols and their no-dating clause. If the on-screen idol couples were to date for real, they probably wouldn’t be condemned as much, compared to a regular idol romance.

One co-star couple who became lovers in real life would be Ahn Jae-hyun and Goo Hye-sun. They first met while filming for Blood; they started dating after the show ended and eventually got married in 2016. Jae-hyun’s romantic proposal has also gone viral, resulting in many netizens to be envious but supportive of their sweet relationship. Co-stars of drama City Hunter Lee Min-ho and Park Min-young is also another example. Many expressed support of their relationship, stating that they liked how well the couple complemented each other in the drama.

But why actors are better able to get away from backlash is mainly due to their status, which differs from idols. Belonging to their own distinctive categories, the public’s perception for each is molded and established differently. Idols are required to uphold a certain image, namely a clean and pure one, to cater to the lowest common denominator. Things get even more complicated if the idol is at the peak of his/her career. Hence, it’s clear that the relationship between idols and fans is of a different level compared to the one between actors and fans. Ultimately, actors have fewer restrictions and fans are more open to them dating, especially with their co-stars. 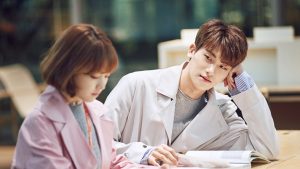 It’s also exceptionally hard to ignore Park Hyung-sik and Park Bo-young‘s compelling and genuine chemistry in Strong Woman Do Bong-soon, which is why so many netizens and fans are just waiting for Bong Bong and Min Min to drop the bomb and be the next Swag couple. Although Hyung-sik is indeed an idol, he is an idol turned actor. Moreover, ZE:A has been inactive in the last couple of years, and increasingly overshadowed by newer and more prominent groups. The shift in his status grants him more freedom. Though the two actors have yet to reveal their official status, their adorable interactions continue to feed fans’ fantasies.

Now back to Sung-kyung and Joo-hyuk. One glance and we’re already sucked into their world of lovey-dovey romance. During filming, Joo-hyuk kept joking (not sure if it was a joke now) about Sung-kyung being his girlfriend and has even snagged himself a reputation for initiating adlibbed kissing scenes. Interestingly, it’d be different and highly inappropriate if it was a K-pop idol in his place. Is this considered double standards? Or is it just a human nature trait – to have an unconscious liking towards what we are already acquainted with? Or is it because Joo-hyuk is a model-actor and not an idol boy band member?

Additionally, image plays an important role in shaping one’s career and relationship with netizens. Negative perception could be the deal-breaker in surviving this competitive industry. A slight stain on one’s image can tarnish a career. Needless to say, whatever news – be it dating scandals or promotions – revolve around one’s perceived image and reputation. Thus, if one’s reputation sucks, so would the reactions and comments from netizens.

When Rain and Kim Tae-hee announced their relationship and then their marriage, netizens were nothing but supportive of the couple. Rain is a veteran in K-pop and a notable actor, whereas Kim Tae-hee is acclaimed as the “Nation’s Goddess”. Both have cultivated a positive image for themselves throughout their careers so the positive response by the public wasn’t surprising. 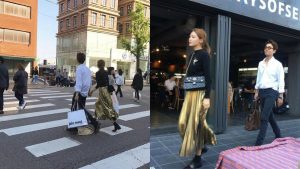 Sooyoung and Jung Kyung-ho have also proven that a clean, reputable image indeed helps to steer away backlash from netizens. Although Girls’ Generation has had their ups and downs, Sooyoung has always been a well-liked member and has received praise for her acting. Recently, they were spotted on a public date, without the typical face masks to conceal their identities. Surprisingly, the responses from netizens were mostly positive and many even hoped for them to tie the knot soon.

Likewise, we’ve observed a clean streak in the reputations of our beloved Swag couple, with no major controversies or scandals. Sung-kyung has also received felicitations for her multifarious talents. Joo-hyuk is also now part of the “Nation’s Boyfriend” gang after his debonair roles in School 2015 and Weightlifting Fairy Kim Bok-joo. Each side provides a familiarity to themselves that fans appreciate and find comfort in. 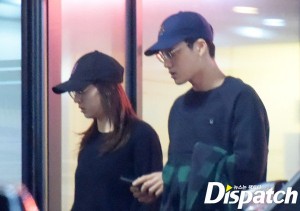 On the other hand, there are couples (in fact, too many) who are everything but well-received by the public. When Dispatch broke the news about the secret relationship between Kai and Krystal last year, all hell broke loose, especially since both were in the prime of their careers. Krystal brings along with her a handful of controversies – mostly regarding her attitude, but she has garnered even more backlash from dating the popular Exo member. And, boy, can their fans be malicious – this is also evident from Baekhyun and Taeyeon’s relationship that most possibly ended due to the wrath of fans and netizens. Oh, and let’s not go into the Sulli and Choiza scandal. But the fact that so many netizens are relieved about their breakup definitely says something.

Regardless of whether the K-pop sphere is experiencing a maturation amongst fans or there are just inevitable double standards and fans just love shipping couples that they like, hopefully there would be a gradual deeper understanding about the idea of fans and idolatry and a shift that separates the line from overlapping. A relationship is still a relationship so congratulations to Sung-kyung and Joo-hyuk; may the Swag couple last a long time!

What do you think about the Swag couple? Can you think of other factors that lead to a well-received couple?