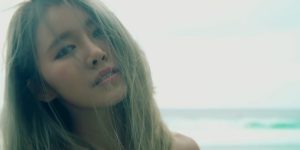 Indie musicians have been establishing a stronger mainstream presence this year, chiefly through more opportunities to participate in drama OSTs, but also through other means. It’s no surprise if Suran‘s name rings a bell, as her unique voice and her producing skills have earned her many collaborations with well-known hip-hop artists and rappers like Primary and Beenzino, as well as K-pop rappers like Zico and Agust D (Suga of BTS).

Given her sizeable discography (5 singles, 12 features, and 2 OSTs), I was surprised to learn that Suran has only been active in the scene from mid-2015, with her collaboration with Primary, “Mannequin”, showing a strong performance on music charts. I was also surprised that she hadn’t done music before; she was a computer science major in college. When she decided she wanted to sing, she embarked on a music career in her early twenties by joining a jazz band.

Suran originally debuted as part of an EDM duo, LODIA, in July 2014 under the name Elena. The duo only released one track, “I Got A Feeling”, and the members have since been promoting as solo singers, with Suran being more active both in singing and producing. As a producer, she stands out in a music scene that is still mainly dominated by male producers and composers (though a number of female indie artists, like Oohyo and Neon Bunny, also maintain most artistic control over their music).

Suran’s diverse background is reflected in the varied genres she explores through each solo release. Her first solo song, the self-composed “I Feel”, melds simple piano instrumentals with an electronica base and soul singing to produce an abstract R&B track. While the production quality of the track is commendable, the delivery is on less firm footing. I lack sufficient understanding of vocal ability to comment extensively on her technique, but her singing sounds slightly strained when she hits higher registers and doesn’t come across as full-bodied enough for soul.

With subsequent releases, though, Suran hits a niche that brings out the strengths of her unique vocal colour. Her voice has a light quality that is similar to Bolbbalgan4‘s Ahn Ji-young, but it is brighter than Ji-young’s more mellow vocals. “Calling in Love” capitalises on this airiness, combining blooming, pulsing synths, faint trills of a telephone with a soaring melody. The result is a summery urban and R&B track that has the warmth of the morning sun and the light sweetness of frozen yogurt.

“Paradise Go”, jointly produced by Suran and Ca$hville, creates a similarly cool yet summery sound through a different genre: with its tropical house and future bass elements, it’s a dance track evocative of a tropical paradise.  The bubbling synth base is as light as Suran’s falsetto-like voice, and a new synth loop is introduced in the final chorus to add dynamism. Even without watching the MV, I can almost see a clear blue ocean stretch out before me when I listen to this song.

While Suran’s bright voice lends itself more naturally to upbeat summery songs, her most recent release, the ballad “Winter Bird”, comes as a pleasant reminder of how she is able and willing to adapt to different genres. In a beautifully written note accompanying the MV, Suran expresses her hope that the song gives strength to those who have been hurt from love. The song, like her note, faces and conveys the stark pain of heartbreak, but also the lingering belief in love despite heartbreak:

Suran’s delivery makes it sound like she is talking quietly rather than singing, bringing the listener into a private, confessional moment of vulnerability and hurt. Where her light voice sounded ethereal in earlier releases, here its whispery quality is wistful, sorrow just barely concealed. The delicate piano instrumentals don’t always follow a consistent time, just like the singing. There is sometimes a lull in the beat and the singing and music seems to end, only to be picked up with the re-entry of breathy vocals. The effect is almost like a bird stumbling with broken wings.

MVs that focus on the singer singing usually don’t sustain attention, but the processing of “Winter Bird” to bring out blue tones, the small, intermittent flecks of snow drifting, and Suran’s wandering work together to seal the mood of heartache. The white furry jacket is a beautiful touch—it makes her look like a lost bird, an image reinforced by the way she flaps her arms slowly at one point and hugs herself like a roosting bird at another point.

While “Winter Bird” may not be the most popular of Suran’s releases, it displays a maturity in her singing and a stronger personal voice. It’s great to see that within the short span of time since her entry into the scene, there has been no shortage of opportunities for her to hone her singing and producing skills. With her openness to trying different styles and genres, she looks set for more interesting and solid releases in future.