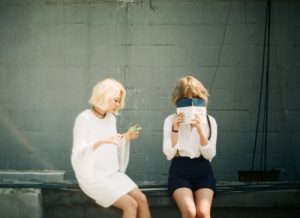 Becoming an adult is exhausting, in part because you spend too much time pretending not to care. When your friends want details on last week’s Tinder date, you shrug and say there wasn’t much chemistry (except there was and why didn’t he text back?). When your parents ask about yesterday’s job interview, you lie and say you didn’t like the company (actually, you failed their written test). Fake apathy becomes the armor to numb the harsh blows of life.

Fresh off of winning the Melon Music Award for Indie, Bolbbalgan4 (볼빨간사춘기, literally “Blushing Adolescence”) is an acoustic duo that has chosen to sidestep this desensitization on the cusp of adulthood with their intimate songs about love. Led by vocalist Ahn Ji-young and backed by instrumentalist Woo Ji-yoon, the two write music in a way that shatters all the armor and delves straight into every girl’s heart – as though one has been allowed to read the dream journal she keeps under her pillow, and hear the secret truths she whispers to her stuffed animals.

While the female soloist is now in vogue in K-pop, few can match the lightness of Ahn’s voice, which trembles with a vulnerability that adds to the confessional air of Bolbbalgan4’s songs. Woo is careful to never overpower her on piano, guitar or bass; their songs are defined by the understanding that a minimalistic ambiance best conveys a soul stripped bare. This has been part of the group’s style since they were first noticed as part of a larger band performing covers on Superstar K6.

After coming to people’s attention in 2014, the two girls were picked up by Shofar Music, an indie entertainment company that describes itself as producing “music that will blow souls into our hearts.” But rather than riding the hype of television and quickly releasing new material, the duo was given two years to practice songwriting. With the exception of a few singles (notably one in the Misaeng OST), Bolbbalgan4 disappeared from the public eye until April 2016, when they returned with their debut EP Red Ickle.

The EP’s first track, “Chocolate,” was actually written when Ahn and Woo were still high school students in Yeongju crushing on their classmates. The song’s lyrics compare the singer’s obsession with a boy to her obsession with chocolate – a fitting metaphor for most females, considering how much the average girl loves sweets. Like the other songs on the EP, “Chocolate” is playful in its acoustic simplicity: it’s the kind of music you can imagine being written as two teenagers jam with their friends after school.

This EP was then repackaged with six new songs for the release of their album Red Planet in August. There is a more polished feel in the album: the tracks now make extensive use of piano, string instruments, and light synthetic sounds that reverberate gently against Ahn’s voice. But while Bolbbalgan4’s later music has obviously been refined in a studio, the intimate tone remains the same in the songs’ exploration of love.

My favorite track, “Hard to Love,” is a somber reflection about the painful feelings at the end of a relationship. Ahn sings plaintively, elongating syllables on the down beat, as her voice overlaps with the sustained chords of Woo’s piano; the effect is the tangible reluctance of a woman who cannot bear to drag herself away from her lover. A trailing echo at the end of each sentence also enlarges the song’s feeling of loneliness, the sense that the singer is “the only one living in a world like this.”

This song, alongside the album’s first track “Galaxy,” have managed to stay on the charts since Bolbbalgan4 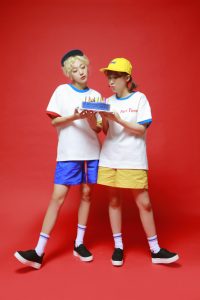 started live promotions in September. Then on November 19, they won the Indie Music Award at this year’s Melon Music Awards. Following in the footsteps of other indie musicians gone mainstream (10cm, Standing Egg, Hyukoh), they are a group that has been given a firm stamp of approval from the public – a coup for two artists not even a year into their official career.

The question on the table is where the songwriting duo will go from here. At twenty years of age, the two have
finally entered the public sphere of the entertainment world; they have finally become women who will face the inevitable disappointments of adulthood. I can only hope that under the glare of this spotlight, Bolbbalgan4 will continue wearing their hearts on their sleeves, and also unpinning said hearts by mailing them to us through their new music.