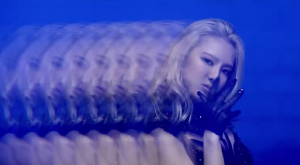 Nearly a decade since her debut, and SNSD‘s Hyoyeon has finally released her first solo single, “Mystery” through SM Station.

“Mystery” is Hyoyeon’s moment in the spotlight outside of her traditional SNSD role as the main dancer and occasional rapper. Over the years, fans have been given small samples of her vocal talents through solo stages and features, but SM has tended towards keeping her in the rap/dance box — even debuting her as the only female in the project dance group, Younique Unit. In 2016 though, SM Station has opened the door for her to explore her potential as a soloist without SM having to invest on a full debut.

SM Station has arguably been one of the better content over-saturation ploys SM has gifted us in the past couple years. The project has given many of the company’s talents chances to experiment with sound and genre. Looking towards SNSD in particular, SM Station has served as a great outlet for members during their year-long hiatus. Taeyeon kicked everything off with “Rain,” Tiffany put out a track arguably stronger than her solo debut with “Heartbreak Hotel,” Yoona had a surprise hit with “Deoksugung Stonewall Walkway,” and Yuri and Seohyun got to star in an EDM hair commercial. “Mystery” is actually Hyoyeon’s second SM Station track, following the collaborative jam “Born to Be Wild.” With “Mystery” Hyoyeon is finally given a chance to stand alone in a much less seizure-inducing MV, and fans were given the Hyoyeon screen time they’ve long hoped for.

“Mystery” is Hyoyeon the soloist presented in a clean package, albeit an obviously lower budget one. SM billed “Mystery” as a Latin pop dance track, which I’m still struggling to understand. There are far more Middle Eastern influences that make up the backing track — and a maybe a hint of Bollywood. Luckily, the visual directors seemed to understand the track’s actual influences and managed to infuse elements of them into the MV’s aesthetics and choreography without crossing the line into appropriation.

There’s no real plot to the MV, but there’s also no shortage of interesting things happening on the screen. The scenes alternate between color; and black and white, maintaining a low light, underground feel that plays into the allusive mood of the dance track. The choreography — as expected from Hyoyeon — is on point and executed with a confident finesse that suits the instrumentals of “Mystery.” Similarly, most of the MV’s aesthetics connect with the track lyrically. The color-changing kaleidoscope solo shots and extreme close-ups pull the viewer into the hypnotic world of Hyoyeon, where she raises people from the dead to come dance with her.

My body moving in the rhythm
Is like hypnosis to you
Your eyes are falling into me, looking at me

Unfortunately, pretty frames and decent choreography do not automatically make for a cohesive MV, and “Mystery” feels a little all over the place in terms of styling. Hyoyeon goes from being sleek in all black one moment, to rocking an Ariana Grande ponytail hat and track suit the next. In those same moments of confusing styling, Hyoyeon dances in a backlit set reminiscent of an Exo “Overdose” leftover that throws off the mood the MV was achieving with the colorful kaleidoscope frames and black and white dance cuts. More than anything, without a real plot, the “Mystery” MV suffers from a lack of momentum that is also apparent in the track itself.

“Mystery” isn’t exactly groundbreaking territory for pop music, and the soundscape borders on dated. Thankfully, Hyoyeon’s vocals come through clear and fresh, and the novelty of hearing her voice dominate a track makes it an exciting release. I’ve always been a fan of Hyoyeon’s voice, and admired the husky maturity of it in what limited samples we’ve been given. Going into the solo, however, I wasn’t sure if that quality would be enough for her to carry a track entirely on her own. After listening, I was reasonably impressed. She wasn’t afraid to play with her unique vocal color, allowing for full bodied lows, and raspier notes on the higher end of her range.  Even if the track could have done without a rap in the bridge, Hyoyeon turned in one of her stronger rap performances with some pretty cool triples that added variety.

While a decent release overall, “Mystery” is lacking something — maybe dynamics or simply more content — that make the track feel like it drags on for longer than three minutes. The chorus centers almost entirely around a repetition of “Mystery” alternated with horn riffs that leaves it feeling more empty than the hypnotic mood the producers were going for. The hook of “la la la” functions pretty well, but overall the track feels like it’s mostly padding and very little material. 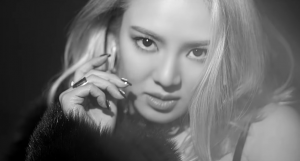 It’s Hyoyeon’s charisma and unique vocals that really carry what could have been a bland release, and make it at least a little memorable; both on screen and when listening. Hyoyeon excels as a performer, and while I understand SM’s reluctance to invest in her as a soloist, I think they’re missing out on a lot of potential. I’d love to see what Hyoyeon is capable of outside of SM Station, if SM really worked to craft a concept for her that would showcase all of her strengths.

“Mystery” may not be a particularly stand-out release, but it is a safe debut for Hyoyeon. I’m also thankful SM allowed Hyoyeon to promote on broadcasts; there is nowhere Hyoyeon shines brighter than on stage (even if the ponytail hat has accompanied her during performances). Her stages thus far have also allowed the choreography to shine through in a way that the MV didn’t. I hope that if we see any future solo releases from Hyoyeon, she’ll be given choreography that allows her to go as hard as we know she can, and an MV that showcases her abilities to their maximum potential.

Readers, what did you think of Hyoyeon’s “Mystery”?