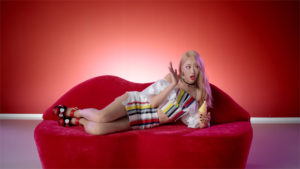 Nine Muses is a terribly under-appreciated girl group that has had a difficult history having undergone no less than eight line-up changes over their six-year career. Yet they’ve somehow held on and continued to put out pretty solid songs that showcase their vocal and rapping skills. This year, they are back with a new sub-unit, Nine Muses A, and a title track that makes a great addition to any K-pop summer playlist.

The concept for “Lip 2 Lip” is quite simple—it’s a song about kissing. The MV’s playful approach is what makes it fun: it plays around with the stereotypes of a first kiss, and by extension takes apart the pure image often associated with first love in South Korea.

The MV opens in what seems to be a child’s playroom. The walls are pastel purple, a toy train chugs along its tracks, and the floor is littered with children’s books, a small tricycle, and stuffed bears. The girls look out of place, and I was about to deliver a side-eye at the un-Nine-Muses-ness of the concept. Fortunately, when Hyemi snatches Kyungri‘s scrapbook, a close-up on it provides reassurance that this is no overdone cutesy MV. 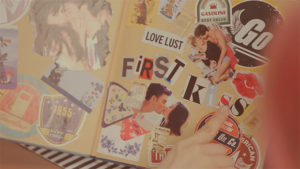 The theme of the scrapbook page is “First Kiss”. But instead of depicting ideas of pureness and innocence, the selected images highlight desire. This is most noticeable in the text “LOVE LUST” placed next to a picture of a topless man hugging his lover, his hand on her thigh. The girls fantasize about how their first kiss would unfold: Keumjo imagines the light bulb conveniently blowing out to create the perfect atmosphere for a kiss, while Hyemi pictures the kiss taking place when her boyfriend hands her a gift and their hands touch. Kyungri ditches the living-room setting in favour of a kiss in the rain.

The girls’ fantasies may be ridden with clichés of awkward, cute first kisses, but these are contrasted against details pointing to sexual attraction and tension. Hyemi glimpses her boyfriend’s toned abs as he changes the faulty light bulb, an image that is added to the “First Kiss” page of the scrapbook. There is also the recurring motif of food and eating, which is often a metaphor for sex: Keumjo and her love interest drink orange juice, and Hyemi, Keumjo, and Kyungri eat a bar of chocolate at various points in the video (it’s probably not too much of a stretch here to remember that toned abs are often called “chocolate abs”). 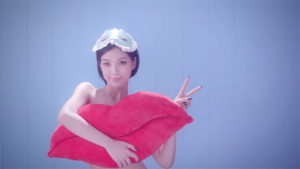 Yet the MV is never too over-the-top or exploitative in its sexual suggestiveness, opting instead for a playful approach that works well with the peppy song. The sensual shot of Sojin kissing her topless boyfriend is balanced by the pop colours of the lipstick stains on his shoulder. The suggestive sequence of the members appearing naked is toned down by their playful expressions and the big, raspberry-pink lip-shaped cushion they carry.

The mischievous tone is sealed by the twist at the end. Hyemi and Kyungri realize their boyfriend is the same person:

Late at night, call from a friend
Your face is on the picture of my new boyfriend?

Instead of breaking into hysterics, Hyemi tosses her phone away and Kyungri drops her scrapbook unceremoniously. The ending pokes fun at the convention of multiple members mooning over one love interest in a MV, and gives an unexpected, logical reason why their fantasies involved the same guy. 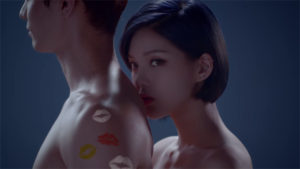 Given the relentless line-up changes the group has been put through, a sub-unit is probably a good way for viewers to become acquainted with the newer members, Sojin and Keumjo, who joined last year. Although “Lip 2 Lip” doesn’t bring anything radically new to the table, it’s a good summer bop with a fittingly energetic dance, accompanied by a MV with some cheeky surprises.