9Muses' "Hurt Locker" is the Best of a Weak Summer, So Far

The term ‘hurt locker,’ popularised by the Academy Award-winning film of the same name, is used in the military to refer to a state of extreme pain; usually physical, but the film also applied the phrase to emotional pain. Simply put, says Hurt Locker writer Mark Boal:

It’s somewhere you don’t want to be

And this is the sentiment 9Muses expresses in its latest single: the pain of being stuck in an on-off relationship with an under-appreciative boyfriend. Not that you would get that from the visuals presented in the MV, upon first glance.

When you think summer, shipping containers aren’t usually the first thing to come to mind. But with a clear blue sky and the sun shining down, Star Empire makes the location work. That’s not to mention that docks and marinas have been the settings for other summery videos (case in point: SNSD‘s “Love&Girls”). There are also some fake trees and other summer paraphernalia thrown into a couple of shipping containers, but the members are still the stand-out attraction in those cuts.

The MV starts with the ladies on the ground, dwarfed by the stacks of containers. In the second verse, they move to the top of the stacks. It’s a striking visual, especially when you see the shots from the drone camera, high above the docks. And as the final chorus kicks in, the pinks and oranges of a summer sunset colour the screen as members Hyemi and Hyuna drive around and off into said sunset. The overall movement symbolises, to me, the escape from the dysfunctional relationship in the lyrics. It’s a simple, yet effective, use of setting and cinematography.

Every member gets a chance to shine in this MV; but while it’s hard to miss Sojin‘s blonde bob, Keumjo‘s hot flasher outfit and Kyungri‘s… well, existence, rapper Euaerin is the one who steals the spotlight. I didn’t even realise I was waiting for her appearance until it happened! She has an advantage, due to her rap, of more uninterrupted screentime than her fellow members; but her simple hairstyle, one piece red swimsuit and smouldering gaze meant Euaerin won the entire MV. 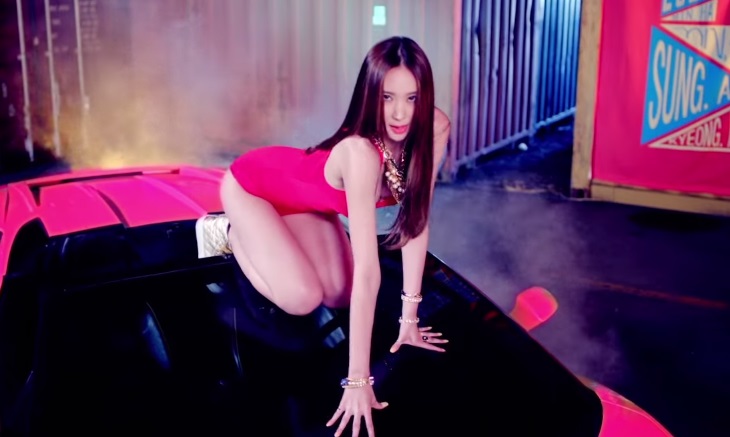 Speaking of outfits, the civvies the members wear are great; but it’s a shame we’ll never see outfits like that on stage because we have these denim pieces straight from Boring & Boring. While Kara‘s cowboy outfits for “Cupid” at least elicited some emotion (that emotion being confusion), 9Muses’ outfits are nothing more than “meh.” While the group is known for its uniform clothing for live performances, more effort could have been put in.

The choreography is nothing ground-breaking, but it suffices. The hook move — which is meant to mimic locking one’s heart (giving the song the alternate title of “Heart Locker”), but also looks like a screwdriver is being pushed into it — is the star, but there are also other parts that catch the eye, like Sojin and Hyemi’s pair-up at the start of the second verse. 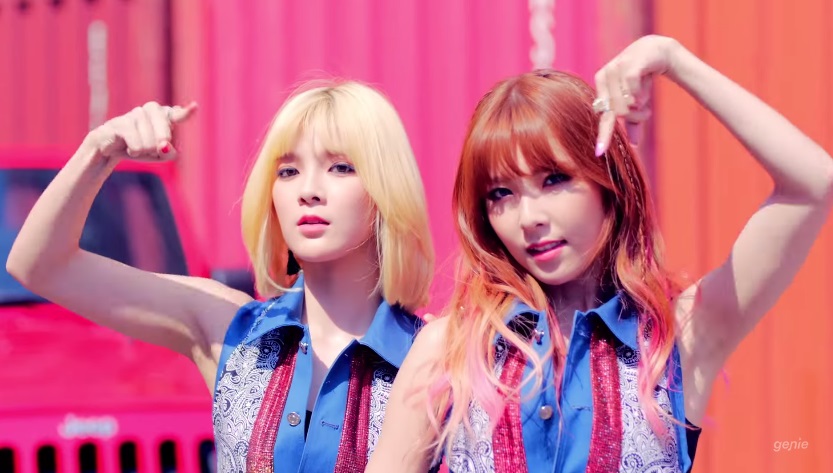 But the biggest plus is the music. While I do like the weak remix sound (as seen with my love for AOA‘s “Heart Attack”), there is nothing quite like a properly club-ready track, with the stuttering guitar adding a point of uniqueness. While the verses may drag a little — even with the fast talk-singing — the build up of the pre-chorus and soaring chorus more than make up for it.

So, while I have my gripes about some aspects, the overall package is a winning one. Thus, 9Muses has managed to put on the most satisfying comeback of this summer so far. That isn’t much of an achievement, given how the offerings up to now have been rather weak, but 9Muses should still be applauded for giving us the feeling that this summer of K-pop is truly underway.