Luna Makes an Electric Debut with "Free Somebody" 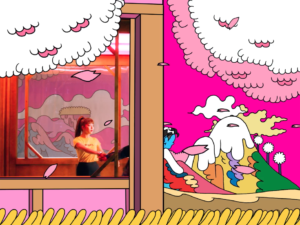 It’s been a slow build-up to Luna‘s solo debut, but it’s finally here. Through appearances on both Immortal Song and Masked Singer, Luna worked hard to lay the ground work for her solo debut with “Free Somebody” and her first mini album of the same name.

Being the second member of f(x) to debut solo, it’s exciting to see her strut all the talents fans know she has in a way that’s different from group mate, Amber. “Free Somebody” isn’t so much about Luna as a personality — like “Shake that Brass” was for Amber — but more of an expression of her abilities as a performer, and an opportunity to showcase said abilities to their fullest.

“Free Somebody” isn’t a huge departure from the more recent stylings of f(x), but it’s just different and edgy enough to distinguish Luna in her own right. The retro-electro track plays to Luna’s strengths as a vocalist and dancer. Both conceptually and musically, it may be the most impressive solo debut SM has put forth so far this year.

“Free Somebody” is all about breaking out of the box and conventions that bind you. In the track, Luna acts as a guide to her lover; tugging them away from the mundane and expected and into a world of (sexual?) freedom. In the MV however, Luna both pulls and is pulled away from her own box, breaking free into a world of trippy animation and sensual dancing.

Will you shine with me right now?

Let’s get away from this place a bit

First off, I love that SM made a box within a box MV that’s all about escaping from a box. Even the camera frame is square, creating another box within a box. It’s so playfully meta it almost hurts, but it’s also wonderfully interrupted with intricate scenes of colorful animations that liberate both Luna and the viewer from the expected. 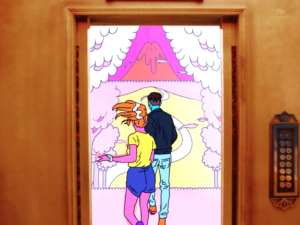 The box motif, the animations, the storyline, are all so very well done and compliment the track perfectly without ever going too over-the top. They allow us to focus on Luna the performer, as well as Luna the storyteller, with dynamic aesthetics to boot. (Not to mention the lovely provocative imagery in the final seconds — volcanoes exploding into sperm-like blobs that morph into naked humans — all very cheeky.)

My only real complaint about the MV is that the concept and animations are so well done, that some other elements of the MV seem to have fallen by the wayside. Luna’s lip-syncing is a little off in the first verse, and some of the styling looks lazy — like the obvious hair extensions on the close-ups. I know some of the unpolished-ness of it all is due to the throwback aesthetic SM was striving for — especially during the dance sequences — but the live-action aspects still fall slightly below the standard I hold SM MVs to.

In terms of the track, it’s a little ironic that “Free Somebody” is all about breaking out of the box, when the track isn’t too far off from the style of an f(x) release — not that I’m complaining.

If you’ve ever wondered what an exclusively Luna version of “4 Walls” sounded like, then “Free Somebody” is your slightly more up-tempo answer. There are moments in “Free Somebody” that sound like something straight out of the pre-chorus to “4 Walls.” Yet, the track distinguishes itself from the group’s most recent release through Luna’s unleashed vocals and the retro elements thrown in to the mix. 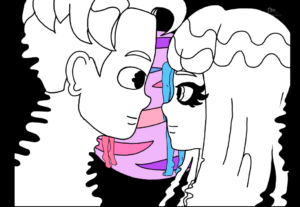 This technique marks a very smart decision on the part of SM, as the electro style suits Luna’s voice really nicely. She can play at some vocal runs that f(x) tracks generally don’t allot her, and show off with her own musicality within a framework that is already geared towards fans of her group. Much like with f(x)’s 4Walls, I didn’t even know how much I could enjoy this kind of music until I heard Luna performing it.

What’s most enjoyable about “Free Somebody,” is that, even with a chorus that is mostly backing track and electro sounds, Luna still manages to belt to her heart’s content and deliver a hook that will ring in your ears long after the first listen. Luna’s a strong singer, but the track never forces her to over-sing. Instead, it creates a steady rhythm on top of which she can deliver stylistically appropriate vocals that still impress. “Free Somebody” is a solid groove-track that makes me both want to sing along and get up and dance with Luna. She not only sings of liberation, but she also delivers that same mood to the listener — which is something that cannot be said for label-mate Tiffany’s recent, “I Just Wanna Dance.”

“Free Somebody” is the perfect mix of experimental and comfortable, ideal for a solo debut of a main vocal who may not have the same fan base to pull off a full departure from her group’s identity just yet. SM has been hitting us with solo debut after solo release these past few months, and honestly it’s a little exhausting. However, Luna’s solo debut is packed with just enough punch to re-energize me and make me excited for whatever’s next.

Readers, how did you like “Free Somebody”? Did it tempt you to give the full mini album a listen?