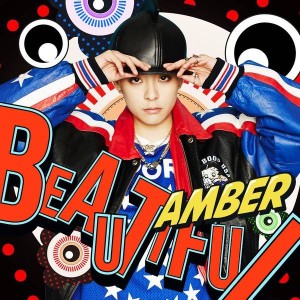 Continuing the solo releases this year, SM decided to give their resident wild child, f(x)’s Amber, a chance to stretch her songwriting skills with debut mini Beautiful. The album is definitely a wish come true for f(x) fans, many hoping and praying SM’s sudden surge in generosity for group members would extend toward one of K-pop’s favorite little sisters.

Though many would’ve expected something more energetic to open the album, the decision to introduce Amber’s voice with “Beautiful” was a bold one. After all, the opening track sets the stage for the rest of the album. The risk turned out to be quite fortuitous. Amber has a pretty purity to her voice that fits like magic with the acoustic bareness of the lead single and title track. She doesn’t try for more than what’s within her range, and while not having the biggest voice, the softness of it is surprisingly evocative. Though it’s expected that she’d rap on the album, it was rather jarring to hear a rap in the middle of this acoustic ballad. For just a moment, I was taken out of the song until my ears could adjust to the aggressiveness of the sound versus the smoothness of the surrounding music and vocal.

The song’s message is simple and clear: I’m beautiful how I am and happy being me. In a world where so many people persistently try to put each other in boxes, this song is definitely a welcome piece of acoustic elegance.

While “Beautiful” was somewhat of a surprising peek into Amber’s musical range, “Shake That Brass” gave fans exactly what they expected from the effervescent singer. A hip-pop track that expresses all the mayhem and mischief that Amber represents, the song is obviously exciting and exactly what you want from a debut single. Though technically there is no brass in the song (instead using a synthesizer to represent trumpet, trombone, french horn, and saxophone—which is a wind instrument, as it were), one can almost forgive the seeming misnomer because of the explosive sound indicative of a brass section.

“Shake That Brass” is a powerful self-introduction if I ever heard one. Not only do we get an earful of Amber’s composing capabilities with the song’s bold sound, lyrically Amber offers some of her trademark playfulness, and that confident sense of self bleeds over into every track on the album:

A cool llama, if you don’t know me, drama
I get down, down baby, from now on, I’m a rock star
What’re you doing alone? Just wait, don’t be nervous and blow that horn

It’s very easy, just follow me and dance
Throw away your calm image and do it with me, shake that brass

There was a bit of interest and some, shall we say, dissatisfaction with the decision to include SNSD’s Taeyeon on the track. But friends don’t let friends debut alone, and at Amber’s behest, Taeyeon didn’t hesitate to lend her support to her close labelmate and homie. Any discomfort with the singer making a cameo appearance on the album was completely unfounded. Taeyeon does nothing more than add a soft vocal to the beat-heavy dance track and doesn’t at all outshine the main artist, as it seems many feared when news of her inclusion on the track started to spread through f(x)’s fanbase.

“Love Run” is a delicate love song, again its softness matching perfectly with the prettiness of Amber’s second soprano. Compositionally, it reminds me a bit of TVXQ’s “Kiss the Baby Sky” in tone and color. The up-tempo balladry during the verses evokes the same feeling of blissful nostalgia, and there’s not a thing in the world wrong with that. While there’s happiness and joy in the music, lyrically the song speaks of running breathlessly to someone you love, waiting for the moment they’ll come back to you as they promised:

Following the bit of melancholy of “Love Run,” Amber returns to her energetic self with dance track “Heights.” It’s the typical club track, complete with slowed-down sections preceding heavy beat drops and its own laser light show of color and sound. It would almost be too typical if it weren’t for the genre diversity of the mini. “Heights” is a song of self-reflection and redemption. Our protagonist has fallen, has triumphed through a past filled with the growing pains indicative of splitting your life between multiple cultures and meeting high expectations.

Sometimes, I get scared too, the rain covers my eyes like a tunnel
But in the end, the sun always rises at the same place, yeah

Look for a new world, always have new dreams
Wherever you go, it’s okay, be free like the light

Amber infuses the entire album with incredible positivity, a welcome note to a new year after what many considered probably the worst year in modern K-pop.

The album closes with a lovely collaboration with Eric Nam, another friend coming to Amber’s aid in her first brush with solo recognition. It’s a sweet track, speaking of the newness and excitement of falling in love for the first time. “I Just Wanna” is a simple love song, nothing groundbreaking here. But there doesn’t need to be. The sentiment of youthful love is universal, even taking a moment at the song’s close to sing a few La- la- las: “I just wanna love you. Give me that chance, wanna hold you. Baby, you know that I need you, I need you, and I want you in my life.”

The song’s message is further propelled by the prettiness of the two voices on the track. Amber and Eric’s harmonies are as simple as the song itself and blend perfectly to send listeners off on a bit of sweet fluff. 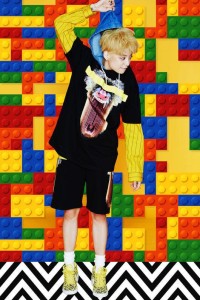 There’s no shortage of genres on the album. We’re never given too much time to adjust to one sound before the next track throws us for another loop. It makes sense for a debut mini-album to attempt to maximize the space available by featuring various genres; however, that leaves room for the album to be a bit unfocused. The genres selected don’t dwell too far out of the comfort zone for someone in an idol group, ranging mostly from simple acoustic to varying shades of pop. However, that doesn’t take away from Amber’s ability to adapt her voice to multiple styles of music. The simplicity and overall lack of difficulty in terms of genre choice was smart insofar as Amber’s voice isn’t exactly powerful, but it’s sweet and delicate enough for listeners to keep the mini on repeat.

Beautiful is a simple, clean debut without any excessive frills or the overproduction part in parcel with many of SM’s releases. Amber is another in the slew of solos to start out 2015, and Beautiful belongs right in the mix of those albums that would make up a “Best Of” list at the end of the year. Hopefully this mini-album will be added impetus to let her feature more on future f(x) releases; however, regardless, it’s very clear for those not familiar with her work, Amber is a competent songwriter and composer. The added bonus of the purity of her voice is just an extra gift at the end of a surprise party.