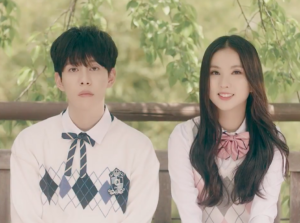 Park Kyung has returned with a solo release featuring GFriend‘s Eunha. This isn’t the first time these two have worked together. They have also appeared together as stars of the second season of MBC‘s web show, “Oh My God! Tip,” where they would give out tips on how to handle awkward situations. This, of course, includes acting as a couple in several situations. Given that these two have the history and the comfort level, it was a good surprise when it was announced that GFriend’s Eunha would feature in “Inferiority Complex.”

An inferiority complex is the feeling of general inadequacy in regards to something. It is something that Park Kyung would understandably have. Park Kyung is usually overlooked by the general K-pop audience for the most popular and prolific member of Block B, Zico. Park Kyung has the same underground rapping experience as his best friend, but does not have the same name recognition with those who do not pay attention to Block B. Within the fandom, he’s known more for being a greasy cucumber. This nickname is stemmed from his greasy nature – cheesy and a bit flirtatious – and for his facial features which have been compared to being a cucumber.

The MV plays upon this by pairing him with Eunha, a member of a trending girl group. They portray a couple in several date-like situations – out in the park eating cotton candy, inside the library on a study date, in a cafe making lattes, and so on. In one situation, Kyung turns the television on and comes across a program, very similar to the “Oh My God! Tip” program, talking about something similar to his inferiority complex. In almost all these situations, the female supposedly gets distracted by a male more handsome and with better features than Park Kyung. 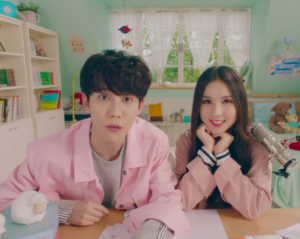 However, it turns out this is all a dream Kyung had. In reality, Eunha is not looking at other males or being cold around him, but actually, she is only looking at him with a smile on her face. Whenever she is on her phone, she is actually looking at pictures of them together. This all underlies that the inferiority complex is just that, a complex, an irrational concern or anxiety over something, and not a real thing.

This theme is emphasized in the lyrics. In the lyrics, Park Kyung focuses on his inferiority complex, laying out reasons why he feels that way with lyrics such as “Why are your eyes going around so much? Fine, he’s taller than me. I see he has broader shoulders too.” On the other hand, Eunha tries to calm his anxiety by saying “Is it an inferiority complex, boy? I told you several times, I only have one person.” 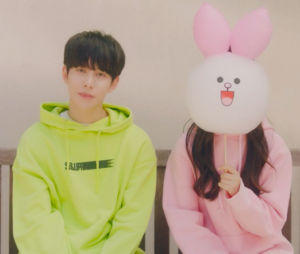 As a song, it serves as a sweet tune that comes perfectly in that awkward time between spring and summer. The instrumental plays well with their voices and does not overwhelm. It is suitable to each artist involved, and Eunha is perfectly serviceable for the needs of the song. Since it sounds sweet and calm, the MV is appropriately also sweet and calm, playing up the strengths of the song. For Park Kyung solo songs, one does not go looking for anything that sounds like Zico, but rather something that is very easy to chill to and can relax with. It is, very frankly, something the Korean audience would undoubtedly love.

As an MV, it does its job to portray the theme of the song in a manner that does not make the watcher bored. With its changing scenes and color schemes, it matches the transition between spring and summer. As a duet, Eunha serves as a great contrast to Kyung’s tone, and together it creates a full story of this couple. All in all, it is another great release from Park Kyung that retains his artistry and his own flavor, while showing just a glimpse of what he can do.