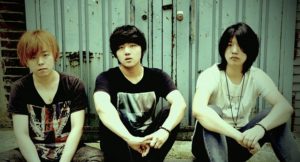 Julia Dream (줄리아드림) is a psychedelic rock band that features some blues influences. Park Joon-hyung is the leader, the guitarist, and singer. Son Byung-gyu plays bass guitar. Yeom Sang-hoon is the drummer. This three piece band has been playing for a while; they first started in 2010 but after some lineup changes, they settled in their current three membered form in 2013. Their name is derived from the Pink Floyd song of the same name.

The band recently returned with their first full length album World Is On Fire: Empire of Anxiety, which is also a double CD concept album. According to an interview they did with Do Indie, they are heavily influenced by “60s western art rock or progressive rock” but the leader also feels there is a “’Koreanness’ in [their] music.”

Julia Dream is certainly a unique band. I can’t quite pinpoint one genre that will fully encompass the band’s style, but they have shown a lot of growth with their latest album. Everything from the vocals to their rhythm choices seems to indicate a shift of direction.

To show an apt comparison, let’s start with their first single album, Lay It Down On Me. It plays out as one cohesive elongated song. Lay It Down On Me gives listeners a strong sense of the band’s roots. “Voice” starts off the single with a displacing collection of sounds. A voice asks “do you want to sleep?” Joon-hyung’s vocals can be heard cutting through the track and there are droning pitches that feel transformative. The tracks bleed into one another as “Lay It Down On Me” follows. Joon-hyung’s vocals are piercing and Byung-gyu lays down a really groovy bass line. “Echoes and Dance” continues with the bass and the lead guitar carves out runs against building tension. It’s spacey and full of sultry energy. “Breath of Life” slows down the tempo for something contemplative and intimate. The refrain is haunting and resonant. This single album shows that psychedelic nature of their music and has some blues influences littered throughout.

Julia Dream is a band that plays with sound textures by distorting tones and amplifying parts of a riff to really alter perception. Such is their cover of “Strange Fruit.” It has blues undertones running rampant throughout the cover. “Strange Fruit” is a tall order taken on with style by Julia Dream. They impart a grittiness to it but maintain the soulful connection and a sense of self in their cover. The passion comes through their performance, while the band can also play through multiple tempos and tones all within the span of a few minutes. Julia Dream show that they have a vast music vocabulary and aren’t afraid to color outside of the lines.

Mixing it up a bit with a popular song that the band likes to gig is “Dance Music.” It’s one of their more upbeat numbers and the tempo works itself into your bones and gets you going. The melody is infectious, and the song is ruled by the bass and drums. Halfway through, the drumming adds different percussive elements, and illuminates another side to the band.

World Is On Fire: Empire of Anxiety finally takes us to the latest evolution of the band’s sound. It is a double CD concept album that is progressive and post rock at times. If you read the story of the concept album (in the Do Indie interview), you’ll find that the band has a unique vision. If I had to summarize the concept album in three words, it would be environment, mortality, and madness. But really, you should read the story behind the album because it would explain how their sound has become so experimental in this latest album.

There are some opera-esque and gothic details along with varying shifts of tone that really plays out in the album. The whole piece is absorbing, movements of sound that continue to hit you over the head in beautifully constructed, melodic waves. On “Casus Belli,” you can hear those heavier riffs where the protagonist of their story devolves into hysteria. These are balanced out in other interludes throughout the album that may have similar melodies to prior songs, but feature different instrumentation. There is a thematic progression, and the construction of the album is phenomenal.

Julia Dream is a band that is different in every essence of the word. They have an exceptional creativity in the way they compose their tracks. The vocal layering, guitar work, bass and drums all come together in intriguing arrangements. On top of that, they have these one-of-a-kind stories that they want to tell and find special ways to transpose that into their music. They are a band that continues to show growth in their sound and find exciting, new ways to express themselves.