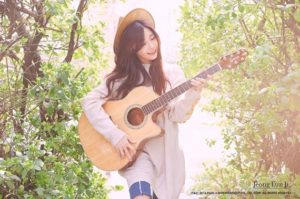 On April 18th, one ephemeral night before her group’s fifth debut anniversary, A Pink’s mesmerizing main vocalist Jung Eunji made her official solo debut with the release of her mini-album Dream and an MV for its poignant title track “Hopefully Sky.”

In her romantic repertoire of musicality, Eunji has collaborations with fellow artists for OSTs and promotional songs such as the nascent and charming “Love Day” in 2012 with Beast’s Yang Yoseob and the harmonious chart-topping duet “All For You”with Seo In-Guk for the sound track of their drama Reply 1997.

Meanwhile, what really drew me to Eunji’s capability as a solo vocalist was her cover of famous trot singer Yoo Ji Na’s song “Red Pepper” in KBS2’s 2014 drama Trot Lovers. Through “Red Pepper” Eunji exhibits a raw and dramatically ecliptic attention to the traditional trot; her versatile vocals present a fusion of pop sensibilities and acquired folk flavour, resulting in a remarkably authentic and adventurous sound that ensures a universal enjoyment.

The MV blossoms dreamily through a pastel lens with intricate attention to its surroundings; we see cherry blossoms gently billowing in the wind and a soft-hued station in Eunji’s picturesque Busan neighbourhood. The particularly acoustic harmonica and guitar instrumentals followed by her soft harmonization plunge us into a world scented in reminiscence.

We learn that this world is one populated by Eunji’s childhood memories and that she is slowly revisiting her favourite places as she strolls alongside a little girl (who is most likely a manifestation of her younger self) playing alone on the sidewalk. She visits a school and paces down flower-strewed streets, sings of her hometown as the site of the brightest star in the sky, and sits down at a time-worn upright piano to play her song. All the while we are accompanying Eunji into a picture frame of her youth as she reminds us of simple days bursting with carefree innocence, coloring books and chalk, ice cream and bubbles, and a blue seaside conveying the turning tides of time. 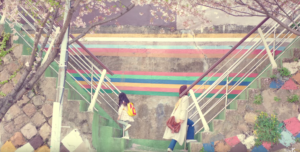 The melody of the song utilizes both subtle electronic sounds and acoustic instrumental tones which cleanly and concisely prepare for the outstanding chorus; the chorus in itself is the epicenter of “Hopefully Sky” and comprises not only a technical proficiency in terms of the melody, but also a compositional indelibility that bridges the story of the MV and the story of the lyrics.

While the cinematography of the MV vivifies a sensory world that leaves a frothy and sweet taste in your mouth while wafting floral scents and ocean breezes beneath your nose, the lyrics of the song are a tender testament to Eunji’s love and reverence for her father. The little girl in the MV has grown up cheerfully and healthily into a young woman and comforts her past self while at the same time reminiscing over how her father was a guiding light and courageous role model, she expresses her gratitude in the only way she is certain will reach him – and that is through song.

Because I’m thankful even when I walk through the rain

Daddy, where are you going?

Will I be able to live with heart like you?

Through the simple yet heartrending lyrics of “Hopefully Sky,” Eunji teaches us about the pure love between fathers and daughters and just how tender a father’s heart is for his daughter. There is balance in this sentimentality: just as her father loved and cherished her as a child Eunji is doing the same in a very intimate yet public way – at the same time she is telling the world about her relationship with her father, she is gently encouraging us to strengthen our bonds with our own fathers and seek the best in relationships with loved ones.

In introspection, “Hopefully Sky” is a tribute not only to hometowns and the bond between father and daughters, but also to the totality that is memory; Eunji’s memories comprise of her father, her town, and her younger self: these instill in her a deep love that she proclaims poetically through the lyrics and visually in the MV. In the meantime, Hareem’s instrumentals are exceptional in their embodiment of folk and memory and underscore Eunji’s “Hopefully Sky” in a very emotional and conclusive way. 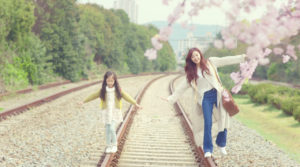 By the resolution of the MV, the instrumentals fade like the cherry blossoms at the end of the day and Eunji looks up once more to the hopeful sky above her, preparing to make even more memories as the days roll along. The final images of the MV are moving and illustrative of the inevitability of time while interlaced with the infinity of memories; a young Eunji sits on a bench beside a bronze statue of an elderly man (a potential manifestation of her father) and a current Eunji sits with that same statue and looks to the camera with a lively smile on her face.

With the release of “Hopefully Sky” Eunji not only impressed, but she succeeded in making her special place in the K-pop scene as a solo artist of the highest rank.

Readers, did Eunji’s “Hopefully Sky” relight special memories in you?

Reminiscing Over Love in Eunji’s “The Space” 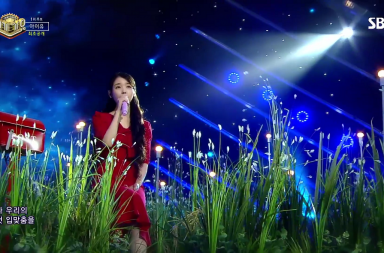