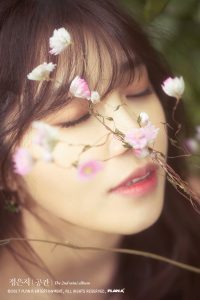 As the main vocalist of one of South Korea’s premier girl groups, A Pink’s Eunji has been setting herself up to become quite the successful soloist. With such popularity and talent, the multi-tainer has been grouped with other similar idols like Ailee, SNSD’s Taeyeon and Sistar’s Hyolyn. In a stark contrast to her girl-next-door image in A Pink, her solo output and image choices are setting her up for a post-A Pink solo career in the vein of sophisticated seniors like Baek Ji-young, Lena Park, and Lim Jeong-hee.

With her previous solo outing Dream, Eunji cemented herself as an emerging balladeer with mellow, almost symphonic productions enhancing her clear, rich voice. The single “Hopefully Sky” with folk singer Hareem mixed pop balladry with folk influences for a successful chart run. This signaled a promising career for the A Pink vocalist. After that success, why not follow it up with a second mini album? Eunji does just that with The Space.

The Space expands upon the folk meets pop sound of Dream to show Eunji’s range – both lyrically and vocally. This album reminisces over love through the maturing view of a young woman. In listening to The Space, the listener goes through a range of emotions with the female protagonist. The mini album starts out regretful of past love but gradually moves into happier territory as it draws to a close. These sentiments are felt throughout via the lyrics and Eunji’s vocal performances.

The album opens on a melancholy note with the title track “The Spring” with folk singer Hareem. At first, “The Spring” seems to be a lovely, upbeat folk pop song. Then you take in the bittersweet lyrics, which reminisce over parting with a lover as spring is fully blooming.

That couple is smiling so brightly

Making me so sad

Why is it so beautiful?

Why am I jealous?

Eunji’s voice interprets both a sense of worry over the lack of warmth in her heart and envy over others’ happiness in the aftermath of a breakup. The two elements — vocals and lyrical content — work in tandem in creating this bittersweet melancholy that envelops the listener. This is a great song for those whose heart hasn’t thawed from the icy frost of heartbreak yet. 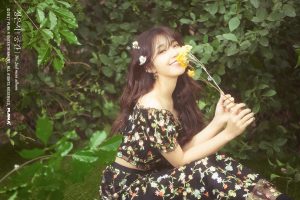 Melancholy extends in reign with another folksy pop number in the form of “’The First Farewell’”, a duet with Superstar K season six winner Kwak Jin-eon. Both Enji and Kwak Ji-eon differ in opinion on the breakdown of the relationship as the somber lyrics are masked by an upbeat production. The back-and-forth nature of the song creates a tension that culminates in sorrowful introspection during the chorus:

We can’t be as innocent as before

We can’t walk together anymore

The two voices give a layer of gentle tenderness in the verses that shifts into painful, yet understanding, regret in the chorus. The song leaves the listener satisfied, but slightly confused and feeling as if they’ve just overheard a juicy personal conversation.

After all the somberness of a breakup, “’Girl’s Boy’” is the beginning of the shining happiness of love. The song begins with the lyrics:

I remember the days I forgot

I close my eyes and recalled those memories

When I carried a bag bigger than me

And wore my awkward school uniform

Looking at you standing there

The lyrics flash back to a crush the female protagonist had during her teenage years as she remembers moments from the past. In spite — or because — of the song’s high pop-rock energy, Eunji proves a great vessel for the song as her vocal dexterity and bright tone of her voice are what really carry it.  This is evident in the climatic chorus when she sings:

The first time I meet that boy

That boy with the pretty smile

He turned around and walked,

Looking at his back

The lyrics and Eunji’s vocals leave the listener thinking of a past love fondly after hearing the song’s syrupy sweet memories. 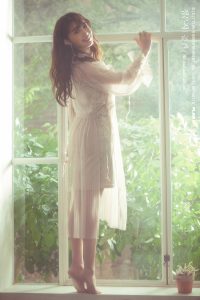 This loving and warm sentiment carries in the metaphoric “’Full Moon.’” The track features Eunji singing to the moon as a distant lover from her youth. The vocals on the track match the lyrics and production with Eunji’s mid-range revealing tender loneliness in the tepid verses and using her full, rich voice in the climatic chorus. Everything in combination makes for a joyous, mellow ending that leaves the listener with sweet memories and a pleasant listen.

Being in love whether love is right or not

Will my old dreams wait for me?

I don’t know where I am

I asked and asked the shining you

When listening to The Space, the lack of subject variation can be a little repetitive after five tracks. It’s the lyric interpretation and vocal performances that elevate the subject matter throughout the album. The varying degrees of love through the lyrics give the listener a well-rounded view of the ups and downs of romance. All the vocals on this album, including the features, add a refreshing touch to a well-worn subject.

With The Space, Eunji has found her niche as a soloist in the crowded idol stratosphere. Hopefully, with the next solo endeavor, Eunji will continue to grow her sound while still keeping her bright vocals front and center.

(Images via Plan A Entertainment.)